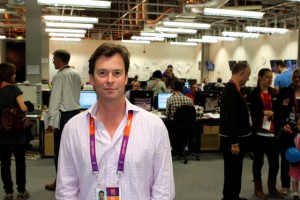 It was not too long ago that the London Olympics seemed destined (even seemingly willed by some) to be a fiasco of mammoth proportions. Traffic would be a disaster throughout. Hotels would be overbooked, with tourists wandering the streets like extras out of a Danny Boyle zombie flick. And, of course, the BBC’s efforts would be for naught because Great Britain would fail to reach the medal stand, fans would stop tuning in, and government inquiries into how this all could have occurred would consume British airwaves and tabloids for months.

It appears that none of that will happen.

“We can safely say the expectations of the Olympics and how they would perform for our TV viewers, radio listeners, and online have blown us away,” says Paul Davies, BBC Sport, executive producer. “The expectations were big, but the data we are getting back and feedback have taken the level of viewership and consumption to a whole new level. And, clearly, the success of the British team has been good for that and helped big time.”

The BBC’s massive commitment to these games is paying dividends for sport fans and the network. A team of more than 700 is ensuring that every event is available live, on TV or the Internet. Watching BBC1’s evening coverage has become a national duty. And, in many ways, that commitment goes back to 27 July, when the Opening Ceremony was held at Olympic Stadium. The memories of the Beijing Opening ceremony in 2008 still resonate as a memorable statement from the Chinese. How could Great Britain, a nation that does not have to, literally, beat the drum to show its global relevance, respond?

“Even the Opening Ceremony was a big question mark,” Davies adds. “Could LOCOG, could Britain, could this country deliver on what was promised when it won the bid? I think, at every level, the Opening Ceremony said yes, we can do this. And the fact that we had more than 27 million viewers for that showed an acceptance that said, ‘Let the Games Begin.’”

The BBC’s operations, fittingly, span the nation, from sailing-broadcast operations in Dorset to a massive effort out of the BBC Sport facilities in Salford, near Manchester. And then there is London, where a presence within the IBC, studios around the Olympic Park, BBC technical facilities in White City, and more are bringing BBC viewers closer to Olympic action than ever before. The massive effort will have a lasting impact well beyond the Closing Ceremonies on Sunday night.

“The legacy for the BBC will be a technical infrastructure that was put in place for 3,000 hours of multiplatform programming over 24 streams,” says Davies. “And the legacy is not just for sport but for an event in the future, as a similar setup will be available. And we’re already talking with other sports bodies about how their productions will benefit from interactive services. People’s viewing habits have completely changed, and we can empower the viewer.”

An obvious event that may feel the impact of the Olympic success is the Commonwealth Games that will be held in Scotland in 2014. “It’s a big event financially, and we need to step back and look at it to find out how we want to deliver it and what the expectations of viewers will be,” says Davies. “And the aspiration will be there to do this in Brazil [in 2016 for the next Summer Olympics].”

Davies says that BBC3 may also benefit as a channel whose presence and brand have been elevated by the hours of Olympic coverage that have made it a mainstay for Olympic fans.

The host-nation challenge
The challenge for the BBC, as a national broadcaster, cannot be overstated. Every dollar spent is watched closely by the British press and politicians. And the tone of coverage needs to be a mix of support for British athletes as well as acknowledgment of great performances from those outside of the British Isles. In many respects, being the broadcaster in the host nation offers the same risks and rewards of being an athlete from the host nation. Not only are expectation raised, but there is also the need to keep one’s focus, not be swept up by the energy from the crowd and viewers, and remember the goal is not only to do the job but to succeed.

“On the production side, you need to maintain your energy, like the athletes,” Davies explains. “You’ve got the heats, you’ve got the finals, and you’ve got to to deliver. So, in our own way, we’re hopefully delivering our own gold-medal standards. And we have to peak and trough, reserving a bit of our star quality for when we have the bigger audiences and moments.”

But, even if the production and talent side do what is expected, there is still the technical challenge.

“On the technical side, we’re providing different options for viewers, but they need to work,” he says. “There is no point in saying we have 24 channels if they don’t work. You’re always beholden to the great moment, but, if technically it doesn’t deliver, then the game is up. But we have great technology, great people, and, with redundancy, we’ve succeeded.”

The technical efforts extend out to the venues as well, giving British fans a sharper editorial focus at the events where athletes are expected to medal (and that list seemed to grow longer every day). Athletics, for example, had six cameras in addition to those available from OBS so that coverage of British athletes could be a constant. A SIS LIVE OB van was on hand outside the Olympic Stadium to produce the athletics coverage and transport the signal back to the IBC.

“Cycling and sailing were also important and had a full presentation platform and a full production team,” adds Davies. “And rowing had it as well.”

Proper coverage
All the efforts by the production staff, technical crew, and talent helps make every event feel like a big one, and Davies cautions that a key to proper coverage is not overselling every moment.

“When there isn’t a big moment, you can’t cry wolf,” he says. “We have to take the viewers on a journey with us and set the agenda in a responsible way.”

And even internally, overselling can be a challenge because producers and others can find themselves caught up in the excitement and looking for additional production resources.

“It’s great that the aspiration is there,” says Davies, “but it does challenge the system as we need to be realistic and do things like reuse features at breakfast time and target certain programs to be the best.”

But the Olympics are an event designed for moments, whether ones of stunning victory or bitter defeat. And when it comes to memorable moments, the 45-minute period on “Super Saturday” when Great Britain took home three gold medals in athletics, will be remembered for ages in Britain and beyond.

“Super Saturday was an historic moment for the country and British sport, and it was something quite special,” says Davies. “I’ve sat in high-profile sports moments like a Federer-Nadal final or Open golf. And when you sit there, you can’t take stock of it because you are in the zone and can’t take the foot off the pedal. But I was privileged to be part of a big team that delivered an amazing experience.”

There are still a couple of days left in the Games and plenty of opportunities for Team GB to deliver more medals, more drama, and more viewers for BBC. On 12 August, it comes to a close, ending a “Summer of Sport” that has battle-tested nearly the entire BBC Sport team and its staff.

“Bear in mind that most of us came into the Olympics off the back of the Euro 12, Wimbledon, the Open, or working on all three. So this was a hugely busy year,” says Davies. “We were tired and tested but technically, editorially, and from a production perspective, delivered to a super gold standard.”