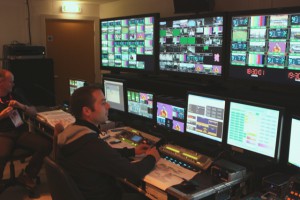 The France Télévisions facility at the IBC is primarily used for editing and to get quality signals back to Paris where the network produces its coverage.

“We have 260 people here and then smaller group in Paris that work in a control room with two directors,” says Francis Cloiseau, head of sports, executive production, for the network. “One director oversees the main program and then another oversees athletics where we have a studio with four cameras that can be switched from Paris.”

The main Olympic coverage airs from 9 a.m. to 1 a.m. and can be seen by French viewers on either France 2 or France 3. The Olympic programming switches between the two networks depending on the programming schedule.

The facilities at the IBC also include eight Avid Media Composer suites for editing highlights and news packages. The editing systems are also connected to an archive in Paris, allowing editors to access older material that is required for a feature or story.

“We used this same set up for the Beijing and Vancouver Olympics,” adds Cloiseau. “The only change is now we have a main studio here while for those games we had the main studio in Paris. But it was difficult to get guests on so we think having the studio in London is better.”

Many of the networks are housing major studio presences within their nations “house,” a location within London that is home base for the nation’s Olympic organising committee, sponsors, and more. The France House is located at Old Billingsgate, right on the Thames and near Tower Bridge.

“The studio has seven cameras that are all controlled directly from our control room in Paris,” says Cloiseau. “Three cameras are fed to Paris through our TOC at the IBC and four others go directly to Paris.”

There is also a unique studio located on top of a double decker bus. It has five cameras and is on the go throughout London, transmitting live video and audio back to the IBC via four receive points in the city. Interviews are conducted with athletes, singers, and celebrities.

As for event coverage, the goal is to be all live with only the occasional event recorded and replayed later.
“We try to do as much live as we can but, for example, today we had to record sailing because something else was going on,” adds Cloiseau.

Like other networks that are increasing their “at home” efforts, France Télévisions is able to invest more money on experts in various sports and commentary, increasing the quality of the editorial content. “And we can have a lot more ENG crews at the events,” adds Cloiseau.

Helping make sure those ENG crews and commentators are in the right place is a proprietary software package that ties into the OBS scheduling feed, allowing the producers to know what events are happening where and easily integrate that into their own scheduling system.

“The IOC is happy because they want to decrease the number of accreditation and the size of the IBC,” adds Cloiseau. “And the cost of the pipes back to Paris is always decreasing so we will keep this [workflow] and be prepared to do it again in Sochi for 2014.”