Live from London: Inside the Opening Ceremony Production with CTV, Done and Dusted 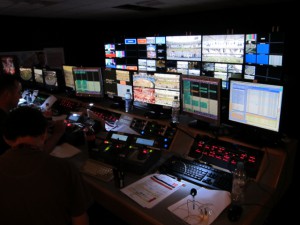 The London Olympics opening ceremony last Friday proved to be a source of pride for Anglophiles the world over, as the London Organising Committee of the Olympic Games (LOCOG), production company Done and Dusted, CTV Outside Broadcasts, and a cast of thousands (plus Queen Elizabeth) hit all the right notes and all the right technical details in telling the story of a nation and culture that is now at the center of the global sport stage. And the show was not only a celebration of Great Britain but also a celebration of broadcast technology.

The project also tested the mettle of CTV, provider of the technical facilities, as the project came together in the past five months and required kit not only for a gallery that was built into the stadium but also a central apparatus room and an OB unit on hand as a backup.

“Every facility in Europe was already taken up and our trucks were doing Aquatics for NBC, two cricket matches and three golf tournaments,” says Barry Johnstone, CTV OB managing director. “So we came up with a plan to bring in a truck from Live TV, one our partners.”

This year’s ceremony also marked a first as the artistic portion of the event was not produced by OBS. Instead, OBS focused on the ceremonial portion of the program and the two production feeds were weaved together by OBS to become one seamless production.

CTV’s team was led by technical producer Bill Morris, whose tremendous amount of experience in live concert shows came in handy for an event that, at its core, was a massive concert show. And, like all great concert events, rain had to play a part during a cable and infrastructure build out that required a massive amount of fibre given that the stadium circumference is 1 kilometer. In addition the closest camera position was no closer than 200 metres to the compound and the farthest was 750 metres away. 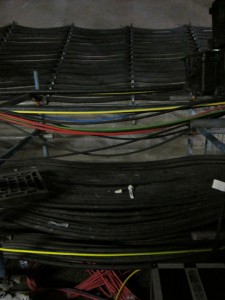 “We’ve been dogged by the most appalling summer weather we’ve ever suffered in the UK and the schedules were squeezed  because of the age-old juggle of water and electricity,” says Morris. “But in the past couple of weeks everything was built, ready, and rehearsing began.”

While the editorial content of the ceremony put the focus on the social history of Great Britain the technical side seemed to be a history of camera technology.

“This show is a culmination of every toy I have ever used in entertainment television and all in one place and at one time,” says Morris. “We had aviation with a blimp and multiple helicopters, Strada [camera cranes], Camcat, four Towercams, and Spidercam.”

The Camcat System, from Austria, is a fully remote controlled cable camera system that can cover distances up to 1,000 metres, at any conceivable angle, and at speeds up to 130km/h with maximum stability and smoothness.

“It needs speed because it has no foreground and you need a perspective change in the stadium so it went up to the top of the stadium and back down again,” adds Morris.

The Spidercam System, meanwhile, needed to have its axis points close together as there was a large amount of cable netting over the stadium for the vast amount of staging demands. The total camera complement exceeded 35, including 11 radio camera systems comprised of eight full RF camera systems and three RF-based GoPro Hero 2 cameras that provided some very important point-of-view shots during the ceremony.

“Cabled cameras would be suicide not only for the camera operators but for everyone around them,” explains Morris.

There was also tremendous pressure on Ofcom, which manages wireless spectrum, as OBS had six wireless systems for the parade and protocol portions of the ceremony and NBC also had multiple wireless systems of its own. And while some TV productions of sport events may share spectrum (with user A using a frequency during the game and user B during halftime) the complexity of the Opening Ceremony required dedicated frequencies for the entire event.

“We used literally every band within the UK spectrum to make this show happen,” says Morris. “And there was very little leeway on either side so we all needed to be honest and accurate.”

The GoPro camera systems continue to find more and more usage within professional-level events, although using the consumer-level cameras in a professional environment does require some workarounds. The progressive output of the GoPro cameras needed to be first converted from HDMI into the HD RF transmitters and then from progressive to 1080i/50 with the help of cross converters.

The need for backups
No TV production likes to operate without a backup plan but a 37-camera production for an audience of more than a billion people requires backups on a different scale.

“This was a game of twos,” says Morris. “We had two of everything as this is the biggest show in the world for a four-year period and therefore redundancy is important. So we had two galleries, two technical operations, and cameras that were able to work in both, if needed.”

In the event of emergency, the OB unit from Live TV, a provider of TV production vehicles in the United Arab Emirates, was on hand. Both the gallery and the OB unit had the same equipment complement, including a GVG Kayak vision mixer, EVS servers, and LCD panels with multiviewers. They were both connected to a central apparatus room that housed the main router and had its own backup power system.

This was the first time the creative portion of the ceremony was produced by the host organizing committee. That first also led to some complexity when the broadcast production shifted to the Olympic protocol elements, like the parade and speeches, that were produced by the OBS team.

In order to maintain a consistent look both the OBS and CTV teams relied on Phillips LDK8000 camera matrices, providing a consistent image quality from one part of the ceremony to the next.

Audio also needed to be seamlessly passed off from Broadcast Audio to OBS. Two Digi Co audio boards were used (the second used as a backup) and the trick was to take out the correct program feeds at the correct time.

Communications also needed to be integrated so all parties involved relied on a Riedel intercom system.

“It could not have been done any other way because the Riedel system is very good at interfacing the nodes that are used by OBS and those doing the ceremony,” explains Morris. “So we didn’t need to reprogram the intercoms for days and days.”

Morris is proud of the work the CTV and Live TV engineering teams did on a show that has already been labeled in the global press as’ the greatest show on earth.

“It has been an enormous privilege to work alongside the CTV and Live engineering teams to bring this hugely complex show to the worlds viewers,” he adds.