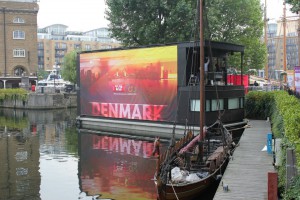 Located in a houseboat at Catherine’s Dock, a full production studio connects to TV2’s broadcast centre in Copenhagen.

TV2 Denmark is giving France Télévisions’ studio in a double-decker bus a run for its money for most original studio location. A houseboat located at Catherine’s Dock has a full production studio connected to the TV2 broadcast centre in Copenhagen.

The IBC operations, meanwhile, act as a central hub for signals from OBS, commentary circuits, and feeds from mixed zones.

“We have two lines that also run from the IBC to Denmark as we do all of the editing of news at the IBC.”

An Avid ISIS 5000 server and Avid editing systems are used for the latter functions, and TV2 also has access to the OBS clips server, from which it can pull off highlights. The Avid gear is owned by TV2, and Applied Electronics of Canada provided the rest of the kit.

“We didn’t have that in Vancouver, and we have a lot more VandA circuits from OBS as well as three SNG vehicles, two in London and one in Dorset at sailing,” says Frederiksen. “We can browse clips with EVS IPDirector and then export it at full quality directly to our Avid system.”

The Olympics continue a busy year for TV2. It broadcast the Giro d’Italia cycling race in May and the Tour de France and will cover the Vuelta a España cycling race in Spain 27 Aug.-9 Sept.

“It’s been a big year for us,” says Frederiksen.