The best way to watch Liverpool defeat Tottenham 2-0 in the 2019 UEFA Champions League Final was to have been there at the Wanda Metropolitano stadium in sultry Madrid on Saturday night. The next best way was to experience the match across a gamut of formats, platforms and devices with BT Sport.

That’s the mantra from the team at BT Sport, who might well claim to be the pound-for-pound most innovative sports broadcaster in the world these days. But they are quick to point out that it is not innovation for its own sake, rather a continuation of its simple driving goal which is to provide ‘the best seat in the house’ for the modern sports fan. 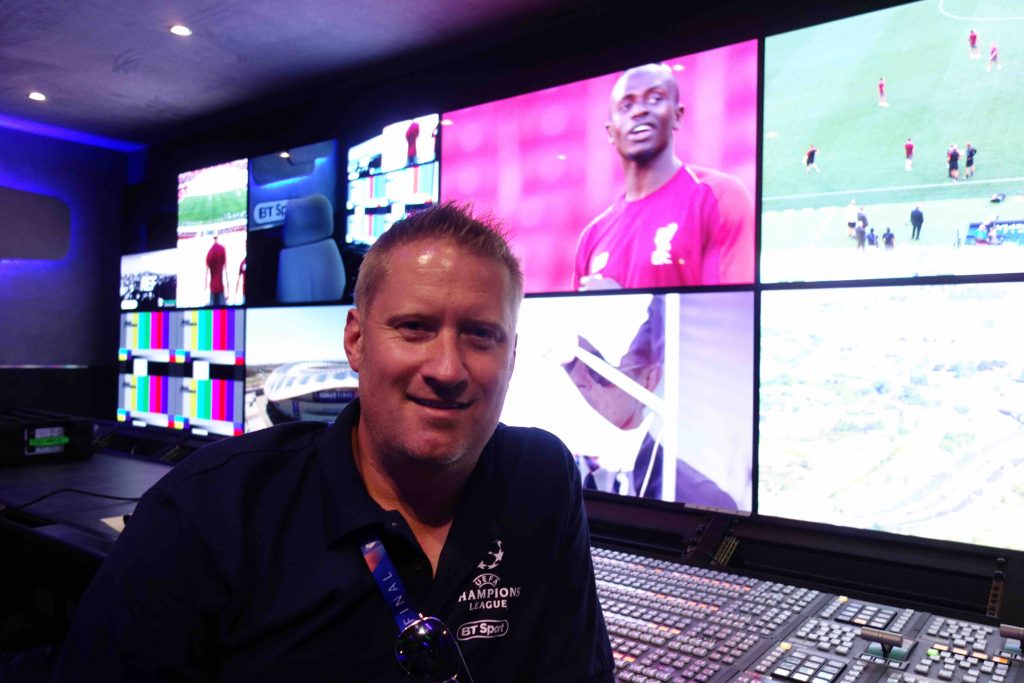 In the TV compound on Match Day minus one, SVG Europe sat down with chief engineer Andy Beale and chief operating officer Jamie Hindhaugh to discuss the technological approach they have taken in delivering the UEFA Champions League Final to viewers.

“We’re doing standard UHD 4K with Dolby Atmos – which of course is still not standard for a lot of people – going out on BT Sport 2, the BT Sport 4K channel and also for free on YouTube and the BT Sport web site but without Dolby Atmos.

“We’re doing a separate HDR feed, which is HD HDR on the small screen and big screen apps. We are also doing a live demonstration to an invited audience in BT Tower which is 4K HDR. And then, the third feed is a curated 360 VR production, 12 cameras directed with separate commentary by Spencer Owen from Spencer FC and real-time graphics. We’re using Insta Pro One cameras from Chinese manufacturer Insta 360 for that.

“We’re reminding people of the great stuff you get week-in and week-out on the BT Sport app in 360. Two weeks ago we did 8K 360 at the FA Cup Final – so you can see where our journey is going.

“Our whole strategy is about taking people to the heart of sport,” continued Hindhaugh. “Tomorrow is about delivering the best-connected and most widely-available Champions League Final ever, and it’s about giving people the ultimate viewing experience. So regardless of what screen you’re on or what connectivity you may have, BT Sport will be giving the best possible experience of the Final.

“Our whole strategy is about taking people to the heart of sport. Tomorrow is about delivering the best-connected and most widely-available Champions League Final ever.”

“And if you’ve got a smart TV that’s not a Samsung you can watch on YouTube in 4K,” added Beale.

“Next season we are rolling out HDR as a standard service around our premium games – HD and 4K,” continued Hindhaugh. “On the mobile at the moment, on the small screen app you can go in and choose to use the enhanced player or you can choose to watch it in HDR.

“On the big screen app from next season you will be able to choose to watch it in 4K, or if there’s HDR available you can watch it in 4K HDR. We’re actually moving away from one channel delivery in one format, to delivering multiple formats from the descriptor of one channel,” said Hindhaugh.

SVG Europe: Let’s go back to the three productions here in the compound. Talk us through what you’re doing and the workflows involved.

“BT Sport 2 and BT Sport 4K YouTube is a unilateral 4K production from the Telegenic T25 truck,” said Beale. “This is taking the host’s SDR 4K feeds and we’re doing our own studio wraparound. We’ll have six unilateral cameras for that production, including Steadicam.

“The HDR production is completely separate, in the T19 truck. It’s an HDR [host broadcast], effectively. It has 19 cameras: Camera 1 is a Sony F55, as always, to give you that lovely high resolution shot. Everything else is Sony 4300 cameras, four running in super slow-mo and four in three times, to give us lots of beautiful super slows. 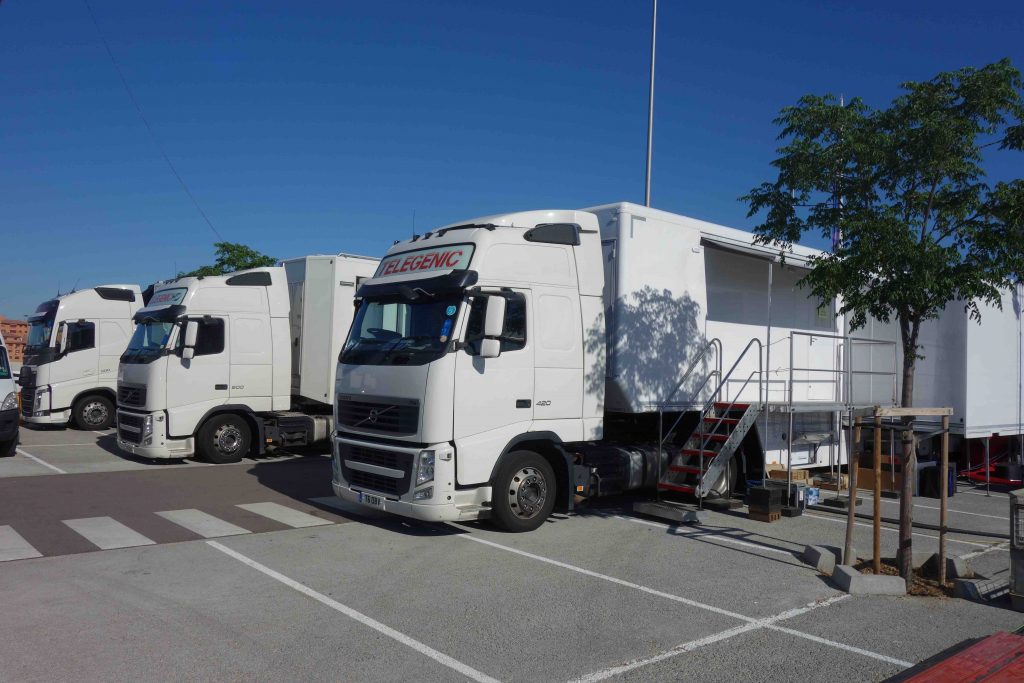 “Plus we have a P50 portable HDR Steadicam, which can do the presentation and then give us lovely pre- and post-match tears and celebration shots. So, comprehensive coverage – more than most Premier League games. It’s a big production in its own right,” said Beale.

SVG Europe: What you’re doing here is certainly complex: but the commitment is there to keep innovating and to keep providing more choice?

“It’s not about ‘keep innovating’; it’s about ‘keep understanding’ what enhances the experience for our audience,” said Hindhaugh.

“If they’re not here in the stadium, how can we make them feel like they are? And there’s a clear adage to me: the best way to go to an event is to be at the event. The second best isn’t to watch it on TV, it’s to watch it with BT Sport – because you’ve got all of this stuff around it.

“HDR is not difficult, but it is difficult! The core technology is still 10-bit SDI video. The difficult bit is making sure that when you do the conversions from HDR to SDR, and vice versa, you don’t break it.”

“We’re fans and we want to give fans the ultimate experience, and we will keep pushing and will keep looking at technology to enable that – if it enables it. If it doesn’t, we’re not interested.

“If you look back over our journey, from the first 4K broadcast [in 2016], you can see there’s a really clear plan as to how that’s all coming together – enhancing, enhancing and enhancing to give that ultimate viewing experience,” he said.

SVG Europe: Is your HDR/SDR single production workflow well understood at this stage?

“As you know, we’ve been doing lots of HDR trials,” said Beale. “HDR is not difficult, but it is difficult! The core technology is still 10-bit SDI video. Once you’ve done the 4K piece you’ve learned how to pass those signals. We’ve been doing that for four years, with over 1,100 4K events.

“The difficult bit is making sure that when you do the conversions from HDR to SDR, and vice versa, you don’t break it. 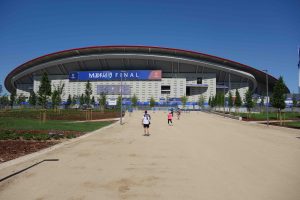 “This is slightly different here in Madrid because we’re not sharing HDR with our SDR audience. We’re not the host broadcaster so we couldn’t do that. That’s why we had to put in our own HDR [host broadcast] here. If we were doing this ourselves at home we would do it in one truck, no question, because we’re now that confident in our ability to make a single HDR/SDR production.

“This year we’ve done 27 HDR productions – all in preparation, basically, for our HDR offering next season. The Premiership Rugby Cup stuff was HDR in Sony S-Log3, as was the Watford v Crystal Palace FA Cup quarter-final and the European rugby finals.

“Our deliverable is HDR10 PQ on the app, to a mobile phone or tablet or on Chromecast to an Apple TV. PQ works best for our distribution model. We can say, hand on heart, that HDR really is a game changer. The pictures are astonishing. You can see the emotion,” said Beale.