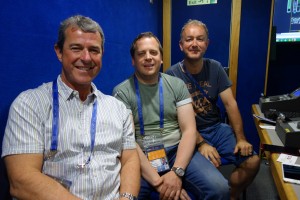 The Telegenic OB team was in the TV compound at the San Siro stadium in Milan to provide the 4K UHD production of the Athletico vs Real Madrid UCL Final on behalf of UEFA. On Match Day-1 SVG Europe sat down with Terry James, Director of Operations; Sean Mulhern, Director of Engineering; and Pete Newton, Head of Cameras, to discuss this UCL production that prepares the ground for 4K at Euro 2016 – and why it was also an extra large weekend for Telegenic in sports production.

Terry James: “Predominantly UEFA are using the model here that they are going to adopt on the Euros, so this is a forerunner. They will be doing eight games in 4K there: the quarter finals, semi finals and final.

“They’re looking to have as much 4K content as possible, so the brief is not to upconvert too much. So here at the Champions League Final we’re taking the Spidercam in HD and the Helicam; on the Euros those sources will be 4K.

“This is a big old stadium. UEFA have cabled the whole venue with dark fibre. We’re utilising a lot of that. The challenge with HD as we know is that you do have fibre issues, especially where here are lots of joins. So far though, everything has come up clean. The cameramen have just arrived and we’ll do a rehearsal today – but touch wood it’s all looking good.”

Pete Newton: “There’s 14 UHD cameras here, standard match coverage. All the cameras are Sony 4300s bar the high speed camera which is the DVS Superloupe; UEFA has hired this in.

“Previously with the Sony F55 cameras we had to use PL-mount lenses. Now, with the 4300s, we are using B Format lenses. We’re trying both Canon and Fujinon lenses here. We’ve got the UJ90s from Canon, comparing with the UA80s from Fuji. We’re mixing and matching those box lenses here.

“The Fuji 80 was the first lens available. Canon are trying to catch up, and they’ve brought out the 90. We’re demoing these two lenses here along with the Canon CJ12 and the Fujinon UA22.

“When we used the PL we had the Chrosziel system which made it difficult to operate, slow to take up on the zoom and focus. Now we’ve got proper broadcast lenses; for the cameramen it’s like walking into HD, there’s no change for them.”

Sean Mulhern: “We’ve just installed a SAM Kahuna mixer in this truck. We purchased two Kahunas and took delivery two weeks ago. This is the first time this one has been used! We’ve got someone from SAM here for support. Typically it’s not something you’d like to do with a new product, but we’ve had experience of it being used in this truck as a demo unit and we pulled it in and out about six times over the last six months. We did it that try-before-buy way, and did some tests.

“The Sony MVS-8000X we had before, which we bought three years ago, just wasn’t up to what can now be produced by other manufacturers. Snell was the one that really ticked a lot of boxes. The new Sony XVS … their timeline for coming up with the spec that this one has just didn’t work out for us in time.

“We’ve been Sony since the advent of SDI. The last non-Sony mixer we had was Grass Valley and that was in the analogue PAL/NTSC days. The new Sony is a powerful mixer, but just at the minute doesn’t offer us the flexibility we see with the Kahuna. Historically you’d have a lot of the glue externally – but all the upconversion and downconversion is actually done internally [in the Kahuna].

“We’re using the Sony PWS-4400 server and we will soon be purchasing the 4500. They’ll be IP ready as well – when they all settle down with their arguments as to who’s the winner in the IP standards debate. That’s a whole different ball game! 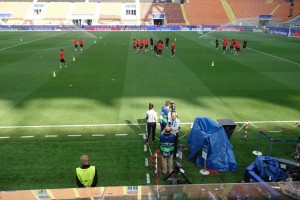 “You’re limited on space in OB trucks, certainly in technical areas. At the minute we have a position for a BVM-X300, the new Sony 30-inch OLED monitor. We would prefer something smaller in that area but we’re limited by what manufacturers build. That does take up one and a half positions in that area. I’m waiting for someone to make a nice 19-inch rack monitor in 4K so that at least we can see it – but if you need to know if there are any issues you’d need to look at a larger screen.”

Terry James: “For this UCL Final, I think there are about seven takers globally for the 4K production. The Japanese are taking it, the Portuguese, the Brazilians, BT Sport, Mediaset – there’s a lot more interest in 4K than when we did it last, which was two years ago.”

Sean Mulhern: “It has moved on. Obviously the Sony 4300 cameras were a game-changer. And for us to spend the amount of money a Kahuna costs is a leap of faith – especially if you’ve been Sony for the last 20 years. And suddenly you’ve got two trucks with different mixers – all our trucks are not the same any more. But to produce what we’re producing here it’s really the only mixer that’s capable of doing it — at this time.

“The push for 4K is coming from the domestic TV world. They’re building sets and people are saying ‘where’s the content?’. Broadcasters are now catching up, and with that the manufacturers catch up. There’s has to be a supply and demand scenario. It’s starting to gain momentum.”

Terry James: “This is a massive weekend for our company. We’re doing two major finals in UHD. It’s the first time we’ve done that, both being taken live. And on the rugby for BT it is simulcast: we’re producing the 4K and the HD out of the same truck.

“This truck is going from here straight to Paris. We pull out of here and head up there. We park up for three days, the team comes back out, and then we go straight into preparing for the Opening Ceremony for the Euros. This truck will then go back to the UK for some other events we’re doing, and heads back to France for the 4K quarter and semi finals.

“We’re doing the Marseilles-Nice strand, if you like, for the Euros multilateral – and then we’re doing the 4K as well. We’re contracted directly with UEFA there, as we are here.

“One of the other trucks we have in Nice, which is doing the multilateral, when it finishes there we’ll take the Sony mixer out and put the Kahuna in and that will do the quarter final and semi final in Marseilles. So we’re actually converting that truck out in France, sending the 4K kit out to join it.