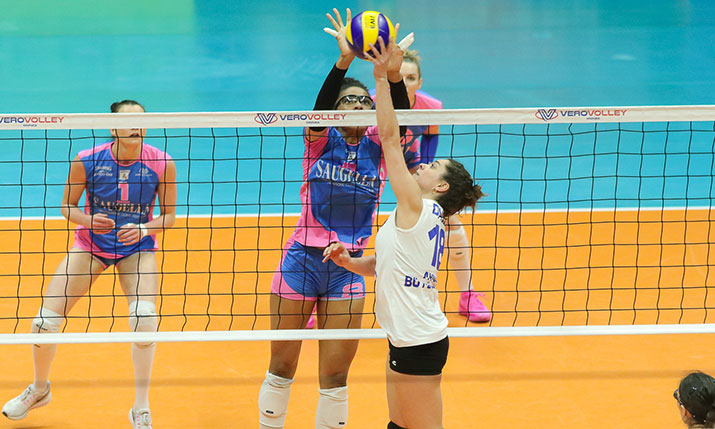 The Candy Arena in the Italian city of Monza was the venue for the final of this year’s Women’s CEV Volleyball Challenge Cup, a match that was significant in both sporting and televisual terms.

The game saw Saugella Monza make history by beating Aydin BBSK 3-1 to claim the trophy in what was the club’s first foray into European competition.

In doing so, they also became only the second Italian team ever to win the competition.

The TV coverage of the final, as well as the first leg of the men’s semi-finals in the same competition at the same venue, was produced by the Italian production company MediaNews, and streamed live on the EuroVolleyTV OTT service.

MediaNews made use of an IP-based OB van for the production, one that utilised both Newtek’s NDI and the Dante audio protocol.

All the onboard video devices, including the video mixer, instant replay machine and graphic contribution system, shared the same IP technology and the entire audio system operated on Dante technology.

With no SDI distribution or analogue audio, all the signals were processed and transferred using IP.

One of MediaNews’ unique selling points is that it always tries to use unconventional methods in order to reduce costs and increase the flexibility of television productions.

The choice of NDI for its OBs continues this tradition and brings with it a major advantage; the ability to lay out a single fibre network that carries everything – audio, video and data – therefore, simplifying the production and its set-up.

Coverage for the Women’s Challenge Cup final and men’s semi-final consisted of five HD cameras plus graphics, replay and commentary stations (see below).

From the mobile vehicle, physically located just outside the Candy Arena, an optical fibre link was carried inside the palazzetto and from there to the cameras and the reporter stations.

“In a remote production there comes a time when you miss the physical presence and the interaction with the public that is definitely a great part of a super sports show.”

The difference is striking compared to traditional systems that can require three to four times the set-up time required here.

“Even the weight of the OB van is decidedly lower than that of a traditional TV vehicle,” he says.

“Therefore, the circulation limits are much lower and also the power mains consumption is very low.”

As he explains, just a normal supply of electricity, even the typical civilian allowance of 2.5KW, is sufficient, since the equipment is completely different from a traditional gallery and consumes a lot less energy.

“Even any PU generators are really small, 3KW, and can work for many hours,” he adds.

Another important advantage of this set-up is that by no longer using SDI video and analogue audio, the size of the control equipment can be drastically reduced. This results in much more available space for operators.

This means that even a Citroën “Jumper” L4 van can comfortably accommodate up to four people plus a director, something that would be completely impossible in a traditional gallery given the size of the racks, says Musso.

Musso himself designed the vehicle, with install and integration completed by MediaNews in collaboration with Adcom. NewTek supplied the onboard kit. 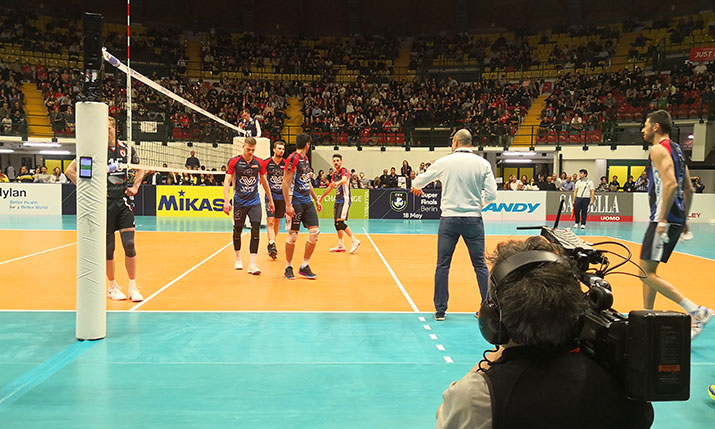 Action from the men’s semi-final is captured from courtside

The camera plan for the five-camera shoot was based on a specification from the CEV, the European Volleyball Federation.

It included two RF cameras for mobile contribution, complete with Swit radio links, plus three fixed cameras positioned around the court: one on the short side and two on the long side; one engaged getting wide shots, while the others dealt with close-ups.

The two radio cameras were positioned on the sidelines so they could get narrow shots of the game as well as shots of the crowd. They were also used for pre and post-game interviews.

The HD cameras used were made by JVC.

Along with audio gear developed by Glensound, and a Behringer audio mixer, the Newtek VMC1 video mixer played a crucial role.

The video control desk is very large, with 44 inputs and 30 outputs and eight MEs.

Although it was being used for HD, it can operate in 4K if required.

During the time-outs, an audio boom operator, equipped with a radio microphone, picked up the sound of the coaches’ discussions.

Two other microphones placed on special tripods behind the competition judges, captured environment sound in stereo.

An additional microphone placed flush with the network grabbed the noise of the game.

Using Dante, the microphones were connected to a Dante converter placed on the sideline and all signals were delivered to the gallery through the use of the same optical fibre used for video distribution. The commentator boxes were also Dante Audio native. 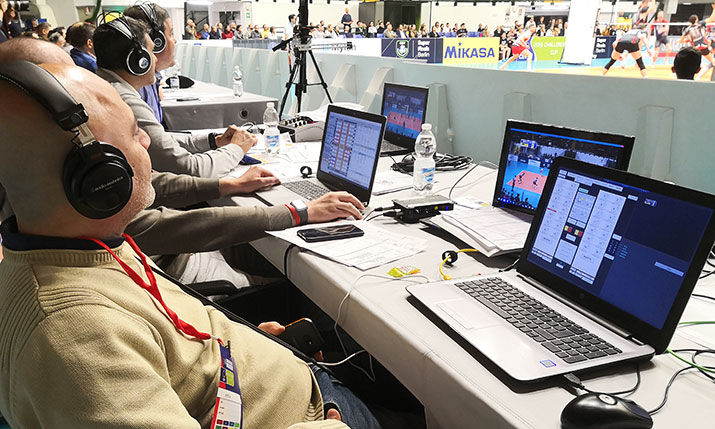 Grafica & Multimedia created all real-time score and statistical graphics from the short side of the court and provided the graphics signal to the NDI network.

“A simple network connection is used to transfer graphics and key signals, including two audio signals and two video signals to and from, allowing us to save a lot of installation and wiring time,” says Musso.

The crew was light and agile with five camera operators, an audio technician, a video mixer (who also acts as a director), a replay technician and a tech supervisor.

Using NDI and Dante it is possible for MediaNews to remotely control any device via the network.

For example, from the commentator box on the field, it is possible to remotely control the audio mixer and adjust the levels, so avoiding interaction with an operator physically placed in the control room.

In practice, from the courtside, it is also possible to remotely operate both video and audio mixers.

This means that in the set-up phase if it is necessary to control particular signals or to set some levels on the spot, it is not imperative to have an additional person connected in the gallery, but it can all be done independently, thanks to IP technology.

However, Musso is not yet convinced about remote production.

“It is feasible to use remote production in its entirety and therefore count on interesting general cost savings, moving on-premise only the indispensable resources,” he says.

“In my opinion, today the presence on the spot – typical of traditional TV production systems which NDI technology facilitates and simplifies – obviously allows greater empathy in the event and makes it more beautiful for the public at home.

“In fact, in a remote production there comes a time when you miss the physical presence and the interaction with the public that is definitely a great part of a super sports show.”

The 2019 Women’s CEV Volleyball Challenge Cup took place on 27 March at the Candy Arena in Monza.

Action shots (above, top and below) courtesy of CEV (Confédération Européenne de Volleyball). 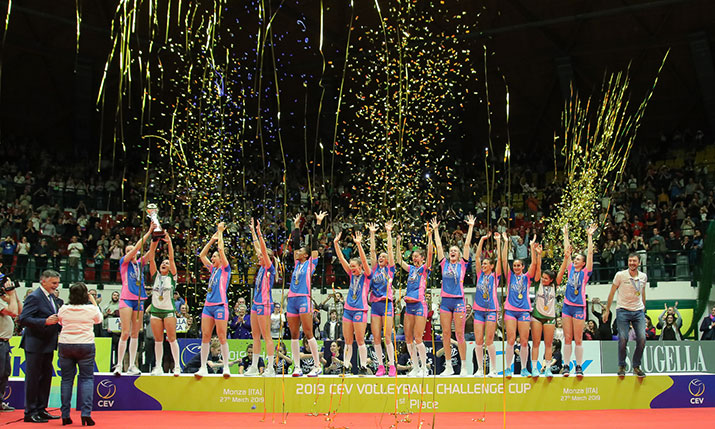