The 2019 final of the Ferrari Challenge, the Corse Clienti, was held at the Mugello circuit from 24-27 October. The Corse Clienti is a single-marque motor championship created in 1993, now involving three official championships in the United States, Asia-Pacific and Europe.

Last weekend competitors gathered at the annual Finali Mondiali at the Mugello Circuit in Italy, the automotive and motorcycle circuit of Scarperia and San Piero, owned by Ferrari. The 5,245-metre track, which winds through 15 curves, attracted over 170 Ferrari cars. The Ferrari Challenge’s showpiece Trofeo Pirelli World Final was won by Adam Carroll, who led lights-to-flag, holding off a late challenge from Bjorn Grossmann.

Global Production from Turin was chosen to produce the on-site television footage and related content distribution, and also as the executive producer of the television event.

Davide Furlan, CEO and partner of Global Production told SVG Europe, “Since 2010 we have been chosen as official producers of the Ferrari Challenge, an event that, given our long experience in television shooting on automobile tracks, represents a very interesting event for us. This is because making a motorsport transmission, ensuring the continuity of the shots, and maximising vehicle speed, requires operational peculiarities that not all TV services can boast.

“It is a question of knowing how to choose the most pertinent technologies and composing operational skills within a circuit that in any case always presents a dangerous component of no small significance. 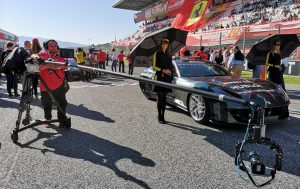 “We pay particular attention to everything concerning the safety of the worker: just think that the cars pass at 300 km per hour and therefore the whole event must be followed according to stringent safety constraints. Thanks to our capacities that have developed over the years, we make a commitment far beyond the basic laws against accidents at work. In addition to making the shooting spectacular and to tell the best sport story for viewers, we take great care not to put anyone in danger.”

At Mugello, Global Production’s OB6 HD mobile vehicle was used. It can be equipped, as standard, with up to 30 GrassValley LDK86N cameras with 4K HDR, 3x, 6x licenses. It is a 16.50m x 4m trailer that mounts Imagine Communications technologies as AV matrices and a Grass Valley Kayak HD300 video mixer heart.

Audio and video glue is by Imagine Communications for 96 3G video inputs, 3ME Panel and 2ME panels. There is a Digico audio mixer with 96 inputs and 48 AES outputs and Riedel intercom systems with 24 LCD panels. Monitors include 55″ LG LCD for production, 32″ LG LCD for the Slomo section and Sony PVM-1741 for the engineering area.

“We pay particular attention to everything concerning the safety of the worker: just think that the cars pass at 300 km per hour” – Davide Furlan

On board there are up to 10 EVS as LiveSlomotion Recorder and up to 10 VTR (HDCAM-XDCAM), two Hyperdeck 4K, and then distribution and re-clocking, 16 channel video embedders and de-embedders, and video and audio distribution including analogue, distribution, 10 3G video and audio frame sync cards with colour correction and delay, 18 video cross converters and various signal measurement tools, master time clock generator, change over, plus audio analysers with Dolby E and more.

Audio innovation with an Olympic vision

The HD images were distributed all over the world and in Italy transmitted live on Sky. Global Production, in addition to serving as producer of the international clean host broadcast feed, also produced a second feed for international broadcasters in English and a third national feed for the personalisation of Sky Italia, with a different running order. The OB6 vehicle chosen for this engagement allows double production thanks to completely separate internal main and secondary control spaces.

Furlan added: “This final was carried out with a commitment of 20 GVG cameras, located on the 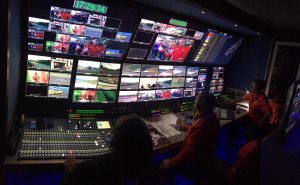 Global Production’s OB6 HD mobile vehicle was used. It can be equipped, as standard, with up to 30 cameras

circuit, covering the strategic parts of the track where overtaking and contacts between cars often take place whilst always giving continuity of the story and the competition. The standard shooting specifications are always adapted and interpreted by us according to the peculiarities of the circuit.”

Audio provides an increasingly important dimension in today’s media output and for the finals it was produced according to the 3D immersive audio technique in recording and 5.1 Dolby live. For the audio recordings, in addition to the typical microphones on each camera that follows the video, two omnidirectional shooting systems were used with Soundfield heads placed in the paddock and near the TV compound.

A special Klang codec received the AES EBU signals of all in-field microphones and a dedicated audio engineer decided the exact location of each sound to determine the typical virtual spatiality of immersive audio.

Following the director’s shots and to create an even greater presence effect with 3D audio, the sound source is better placed in three-dimensional space. Given the likely involvement of Global Production in the upcoming 2020 Olympics, in which the audio will be officially realised and transmitted in an immersive 3D way, the tests on this new shooting system continue and the Ferrari Challenge returned important information.

The metadata used for this additional information is coded in the production phase and delivered together with the video signal. Then the software at home in the decoder performs decoding and sends discrete sounds to the extended surround speaker system. 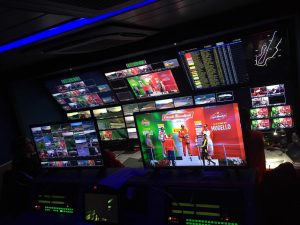 Last year’s production was in UHD while this year it was broadcast in HD as a Sky choice, as they currently only broadcast one channel in UHD. At Mugello, the TV compound was positioned at the start of the paddocks and the satellite uplink connection was outsourced to Globecast.

Davide Furlan concluded: “The Ferrari Challenge lasts three days from Friday to Sunday and we start with the preparations even from the previous Monday, to be ready on Friday morning. Timed qualification commences on Thursday and we start with tests and recordings of the contour contributions.

“The team we deployed for this occasion included about 45 professionals, of which there were director, assistant director, video mixer, five rvm operators, four camera controls, two sound mixers, the producer and the technical leader.

“One of the features that distinguishes the production of the Ferrari Challenge is the presence of miniaturised on-board live cameras, in fact, we have five of them, four on the racing cars and one on the safety car. They are miniature Marshall cameras with VSN Vislink radio links,” he said.