Live from NBA All-Star: Inside Intel and Turner’s ‘NBA on TNT’ VR production

Beginning this week, Turner and Intel will team up to present one NBA on TNT game per week for the rest of the season, as well as TNT Playoff games.

“We announced our partnership all the way back in November, so we’re very excited to finally be starting it up with All-Star weekend,” says Nadia Banks, customer Implementation manager, Intel Sports. “Our core VR group has grown so much over the last couple years, and this is definitely a big moment for us. It’s now starting to become more like a rinse and repeat: we go, we learn, we optimize, and then we go again.”

Inside the truck: NEP’s Cobalt serves NBA on TNT VR

Both NBA on TNT test VR productions, which took place on January 15 (Rockets at Clippers) and January 25 (Timberwolves at Warriors), were produced out of NEP’s Cobalt mobile unit, the same truck onsite at the Staples Center truck compound last week for the All-Star VR show. Intel and Turner worked with NEP to customise Cobalt for VR production, and it will serve as the primary Intel True VR mobile unit for the rest of this season.

“We have a couple other trucks that we will start to introduce also, but this is the main truck [for NBA on TNT VR],” says Banks. “What is great about this truck is, it lets us have a bigger camera show. For MLB [VR weekly productions], we used a smaller Sprinter van, and it had four cameras. We can have twice that on this truck.” 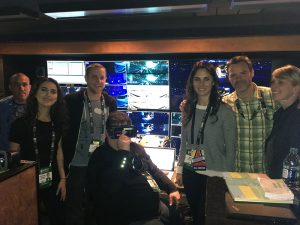 The camera complement for the VR productions varied throughout last weekend depending on the event, with as many as eight for the Slam Dunk contest and All-Star Game itself. Among the primary positions on the court were a midcourt camera sitting on Turner’s announcers table, one under each basket’s stanchion, two behind the glass, and a Steadicam.

“You have to remember that you’re not just capturing the event itself. It’s also about how we cover the player intros, the concerts, and things like that,” says Banks. “You also have to remember that these cameras aren’t just looking forward; they’re capturing [180 degrees]. So, when we work with the league on camera angles, we’ve got to think about everything that’s being captured, not just what’s right in front of it.”

“Since we don’t have commercials in our [VR feed], we are looking to push shoulder content,” notes Banks. “We are thinking about what kinds of content we can create when television goes to break. We’re not trying to be television; we’re trying to give you a glimpse of what it’s like to be sitting and watching in the arena. But we also want to keep [the viewer] engaged when there are breaks in the game.”

Intel rolled out two types of True VR camera pods at Staples Center. Its primary rig features 12 4K cameras with specialty lenses, six on each side of the pod. These six camera feeds are stitched together in the truck to create the full 180-degree image. The second camera-pod model, which is being used for the Steadicam and ENG, is smaller and more portable.

VR vs. broadcast production: So similar and yet so different

Last weekend’s VR production marked one of Intel’s largest to date — in terms of crew members, totaling 26 onsite. As Banks and company develop a live–VR-production model for basketball, they are also cognisant that much of the operation should follow the traditional broadcast-production model.

“When it comes to the operational side,” says Banks, “we try to keep it as close to broadcast rules and processes as possible because it’s familiar and proven. The difference is, if you’re looking at the image, you’re not just getting a picture of what’s happening in front of the camera, you’re getting a 180 view. So you do have to train everyone to look not just at the center but also at what is happening all around.

“Even with talent,” he continues, “they have to remember that they’re not just calling the play; they need to look left or right sometimes to see what is happening. Also, the director has to put the headset on to actually see what’s happening in the 180 space. It’s really just trying to embrace what the environment is and get comfortable with that.”

Among the chief differences between broadcast and VR productions is the added element of stitching for the video operator.

“Our main camera pods have six lenses for the left, six for the right, so we’re stitching them together. That’s a completely brand-new [role]. The video [operators] aren’t just coloring and shading your video; they are also making sure you’re stitching it together properly. Unlike broadcast, where you’ve got one role that does this one specific thing, you’re wearing multiple different hats.”

The free NBA on TNT VR app officially launched for Samsung Gear VR in the Oculus and Google Play stores on Monday. The app takes fans directly inside a virtual version of NBA on TNT’s Studio J, which serves as the portal into all the available programming. Fans can watch game highlights and game recaps and, once logged in with their TV-service–provider information, have access to selected live NBA on TNT games and full-game replays in VR, featuring in-game broadcast stats.