When the 2014 Rio Games came to an end it was unclear whether or not ARD and ZDF, the two national German broadcasters that combine efforts on the Olympics, would be at the 2018 Winter Games given that Eurosport had purchased the rights for all of Europe. But last August a deal was struck and the ARD and ZDF planning stage for PyeongChang began. The problem? Space in the IBC was limited, rental companies were short of equipment, and production staff had been committed to other events. Compromises had to be made. 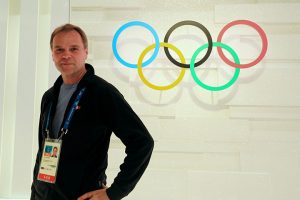 Gunnar Darge and the team at ARD and ZDF had little time to prepare for the Olympics but operations are going well.

Gunnar Darge, ZDF, head of engineering and operations, special projects explains: “In Rio we had 2,700 square meters and here we only have 1,1000 so it was not possible to put all of the production parts here in this small area,” says Darge. “We made the decision to split it up and we have a National Broadcast Center in Leipzig, Germany where we have Avid and EVS editing suites working for us. We also have three Avid edit suites and five EVS edit suites here with a total of 27 8-channel EVS servers in use.”

The space in the IBC also includes three control rooms that are used to create the programming signal that is delivered via either ARD or ZDF on alternation days. There is also a nice studio that offers up multiple positions for different programming needs. 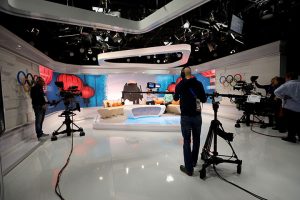 ARD and ZDF have one of the nicer studios in the IBC.

The condensed production area may have been born out of necessity this year but odds are something similar will happen at the 2020 Tokyo Games as ARD and ZDF are under a bit more scrutiny when it comes to costs.

“Every country is staying at home and doing more remote productions and we will have to do more in Germany for Tokyo,” says Darge.

The ARD and ZDF facility also has three Horlemann Mobile Energy Uninterruptable Power Supply (UPS) systems on hand in case there is a loss of power.

“If there is a loss of power it will take up to 20 seconds to get our generators running and if the systems here power down and then up it’s a disaster,” he says. “So, we have our own UPS.”