The BBC Sport presence within the IBC at the 2018 Winter Games is on the frontlines of a coverage effort that begins at the venues and extends all the way home to MediaCityUK in Salford, where a larger production team pulls together commentary, host feeds, beauty shots and studio coverage to deliver all the action via two production control rooms.

“We are essentially doing live presentation, mixed zone coverage, announcing at curling, a few ENG crews, and have three Avid edit stations, here at the IBC,” says Jonny Bramley, BBC Sport, executive producer. “We are getting the best of what is on site efficiently and we are still very happy with the output. And so far, we have seen great audience viewing figures and feedback.” 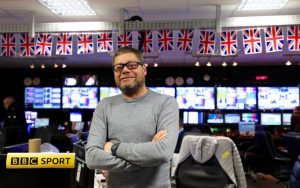 Bramley has been on site for about three weeks and he said it was a great feeling to arrive at an Olympics and hear nothing but good feedback about the state of the IBC, the helpfulness of the local organising committee, and logistical issues like hotels and transportation.

“I have never turned up at an IBC to find our installation crew so relaxed and OBS has been very happy as well,” he adds.

There are about 90 people in PyeongChang for the BBC and most of them spend their days in a space that has three editing facilities, off-tube commentary areas, EVS for recording of things like beauty shots, and a gallery that is designed to taken in a multitude of content and then cut it down to a manageable size for the production team in the UK. DEGA Broadcast Systems in the UK was responsible for the equipment integration in PyeongChang.

“The bulk of the production, post production, journalism and programme transmissions is coming from MediaCityUK in Salford,” says Bramley.

Avid editing systems are being used in both South Korea and at MediaCityUK and the editing teams will collaborate, if needed, to finish off packages that begin in the other location.

“We’ll be using Avid’s Interplay MAM which will enable us to consolidate edits as we progress through the games freeing up valuable space on the edit storage,” says Bramley. “We will also use EVS IPDirector to manage our nearline storage.”

The BBC also has an outdoor presentation set in PyeongChang with a single camera and small Yamaha DM1000 audio desk where athletes and other guests can stop by and be fed into the coverage back home and also during BBC Breakfast, which begins at 6am GMT. The efforts from that set will complement the main presentation studio back home which will be used from 9:15-8 pm GMT.

Every Olympics offers a chance for the BBC to improve on previous efforts and PyeongChang is no exception. During Sochi the BBC took some of its first steps towards remote production and they experienced some delays when it came to cueing the talent as the signals would go from the studio to the IBC to Media City in the UK and then back to the studio. That long trip and multiple encodes and decodes introduced delays and the BBC, along with Calrec, have worked on a solution that keeps all of the audio cueing within Korea, minimising delays and making life easier for all involved.

“It’s a clever solution and there is effectively no delay,” says Bramley.

BBC Sport is focusing its efforts towards the peak UK viewing hours with a nightly highlight show airing on BBC1 from 7-8 pm UK time. BBC4, meanwhile, will offer a longer-form one-hour highlight package later in the evening before BBC1 live coverage kicks off at midnight and ends at 6 am where it then transitions to BBC2. The Red Button Channel, meanwhile, will offer up 24/7 coverage.

“The nightly BBC1 highlight show is a tight, energetic digest while the one on BBC4 gives, say, a figure skating fan a little bit more coverage.”

Bramley says he and the production team are happy with the set up and the performance of all involved. “It’s day two but things have worked out well and we had great planning, so I want to thank [BBC Sport Chief Engineer] Richard Morgan and his team,” says Bramley.