Live From PyeongChang: OBS’ Nuno Duarte takes us inside the sounds of Olympic events 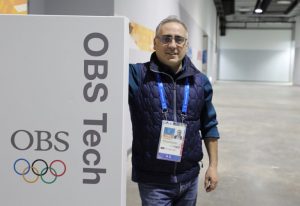 Senior Manager, Audio, Nuno Duarte says the goal is to create audio that allows the TV viewer to identify a sport without seeing it

He loves the concept of immersive audio, and, with things like 22.2 surround sound and the freedom to approach audio in a way that focuses on the sport rather than the talent, he has a larger degree of freedom than almost anyone in the business. He took a few minutes out of his busy schedule to discuss the 2018 Games and the OBS philosophy with SVG.

That is not always easy. How many mics do you have on an event to be able to do that?
Around 50. But it’s not only about microphone placement. We have to know the venue; we need to know the PA and work with the PA guys so we know where the PA will be and to make sure it will not interfere with our coverage. I think that is fundamental. Figure skating is a good example of that: we could have microphones out that could cover the skates and athletes; if they had a PA system that had audio that spilled out all over the place, whatever microphones you have and however many thousands of them you have, you’re done.

But that can be tricky.
Yes, it can be tricky, and it takes a lot of compromise. We work with the host committee. Normally, they are very open to solutions, but it is a hard process during the years ahead of the Games.

And then there are the federations. The athletes are the stars, so we need to make sure that the microphones are placed in positions that don’t disturb the competition and the athletes. Of course, some will tell us to put a mic here or there, so we have to work together because it’s in the best interest of everybody. If we want to try ice microphones, we have to talk with the guy who constructs the ice. It’s a long process, but figure skating is a good example of how it is not just arriving and putting in microphones. It’s a long process.

How can you figure out what it will sound like where there is a crowd in the venue?
We have our experience, and we have made progress on the concepts and philosophy of ambience. To me, it is very important to feel as if you are in the crowd, and here we have the outside venues and indoor venues.

Indoor venues are a controlled environment where we have catwalks and we use spaced-pair stereo microphones that are aligned with the PA. Outdoor is much more difficult, and we will use a 4.0 microphone, which has two front and two rear mics; we don’t put audio in the center channel because that is free for commentators. If I put in mix information, everything there will be lost, so my base is 4.1 not 5.1 surround sound.

But that seems to give you more freedom because mixers always have problems fitting in the talent.
From one side, it is easier because of that, but then, on the other side, we don’t have the reference of the commentator as they will each have different dynamics [between commentators from different countries]. Even from the same country and different sports, they have different dynamics: the ones for hockey are more emotive than the ones for curling. We try to accommodate all the sports.

You mention not interfering with the competition or athletes in placing mics. How do you do that?
I have 30 different types of microphones, and I know what I want covered in each sport. Then I have conversations with the federations because they approve the microphone plans on the field of play. They will say that a shotgun mic may not be good in a position, so we will find another mic like a boundary or mini mic. Like everything in life, it’s a balance.

You mention being able to identify a sport by the sound, but, at the Olympics, some sports share the same venue, like at the sliding centre. Does luge sound different from skeleton or bobsled?
Luge sounds completely different from bobsled. It’s the same track, but we don’t have the opportunity to change the plan from the morning to the afternoon. The teams work very hard to cover all the course and then do layers like more LFE for the bobsled; in luge, we don’t have that, so we need more crowd. It’s an interesting game.

Are the federations understanding of what you are trying to do?
Yes, because we both have the same goal. Sometimes, I need to explain in detail why they want to put the microphone in the ice, and I will just say, “It’s going to sound great.”

How about something like figure skating and short track, which share the same venue? They are very different.
The microphone plans are the same. But the big difference is that, in figure skating, the athletes don’t crash and go against the padding. So the microphones I have to use in the padding for figure skating have to be different from the ones I use in short track. Also, on the curves, where the short-track skaters crash more, I can’t put microphones because, with safety, there is no question. I would rather have no audio and have everyone complain but have the athletes be safe.

How do you go about hiring audio mixers?
At OBS, we hire the best experts in each sport. If you are the guy that used to do curling, we will bring you in. Or, if you do hockey every week, we will bring them in. And then I need to explain to them what we expect for OBS production, and that is consistency across all the sports so it sounds like one production. For professionals, that is not complex.

Obviously, you can overdo audio and make it sound unnatural. How do you prevent that?
That is the balance that I try to find and my responsibility. We have briefings, and we give them some levels for loudness. Loudness control is fantastic because it helps me make the levels the same across all the sports, even if it is cross-country or hockey. And that is the challenge and why I am in permanent contact with the A1s.

Are there any submixes being done?
No, there are no submixes except for cross-country or biathlon, where there is such a huge area and we need someone for the course and one to do the master. But, for the rest, the elements in the mix are the same: ambient, field of play, and near crowd. For me, ambience is very important and needs to be three-dimensional. We have the high microphones for the crowd, the near microphones, and then the field-of-play microphones. Those are what the mixers need to provide me, so I can tell them we need more crowd or more field of play.

Height is a big part of 22.2, but how do you add height to something like biathlon?
That is why I am pushing for 4.0 microphones: on a pole or crane, it can support the mix for immersive audio. And it works.

Automated mixing, like on bobsled, where the audio follows video automatically, is something of interest to more and more broadcasters because they can automate part of the mixing process. What do you think of automation and mixing?
Sometimes it is needed, but my advice to the A1s, and my experience from car races, is that it is very difficult to follow the director when he cuts from Camera 30 to Camera 60. So we use audio-follow-video to identify the position on the track, and then, with faders in hand, we can accommodate and make it soft. That is my advice to all mixers: the last decibel must be done by hand. You might not get there in time, but at least you have something. But you need to follow the director because he might zoom in the camera, so you need to zoom in the audio. But, if you just leave it to an automated system, the levels will be the same independent of the zoom, and then it doesn’t match.