Live from PyeongChang: OBS’s OVP offers a bevy of streaming-infrastructure options to rightsholders

All across the globe, viewers have enjoyed two weeks of spectacular coverage of the 2018 Winter Olympic Games, and not just on their television sets. In fact, the live-streaming numbers pouring in over the past week reveal that a lot of people are watching the Olympics on a device other than their TV.

As with the linear show, the live-streaming and mobile application products being delivered to viewers of these Games are supported through the work of the International Olympic Committee’s (IOC) media branch, Olympic Broadcasting Services (OBS). For the past few Olympic Games, OBS has produced Olympic Video Player (OVP), a white-label version of a live-streaming app that can be delivered directly to consumers. 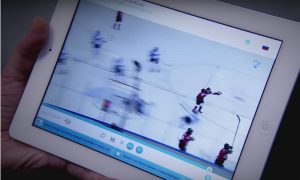 However, as streaming has increasingly become a mainstream consumption model, major broadcasters (including NBC Sports in the U.S., Eurosport in Europe, the BBC in England, and CBC in Canada) have wanted either more control over the product or the ability to integrate Olympics coverage into their existing apps. In such cases, OBS is now delivering, via the cloud, a package of encoded streams that can be used for live-streaming video and event data directly into one’s own existing app.

Let’s put it this way: as a rightsholder, do you want the premade tub of Ben & Jerry’s (still delicious!) or the build-your-own sundae bar (oh, the possibilities!)? The choice is yours!

“Obviously, there’s app fatigue,” says Matt Millington, head of digital, OBS, acknowledging that broadcasters might want to forge their own path and noting that who takes what is currently about a 50-50 split. “People’s phones are running out of space, and users aren’t that keen on too many apps. So we’ve broken up the OVP to allow people to take the streams-only solution. Economies of scale means that we can do that much cheaper than they can do it themselves. Here, we’ve got a maximum of 11 or 12 live [events] at any one time so that’s a big expense for a broadcaster, who normally may have only one live.”

The other obvious benefit for a broadcaster integrating the Olympics into its own app is that many viewers may already have the app on their device. Also, the network wins in branding and exposure by encouraging the downloading of that app during a high-profile event like the Olympics. In addition, it can be challenging to get a user to download a new app for a two-week event, and then, with a one-off white-label app, the broadcaster loses all of that valuable user data when the event is over.

It ultimately comes down to coordination between the rightsholder and the OBS, a task that Millington says can be challenging and highly time-sensitive. In an ideal world, a broadcaster will submit its final decision to the OBS a year before the Games. It’s not uncommon for an ambitious broadcaster to build its own streaming experience only to get cold feet in the final months leading up to the Opening Ceremony. Therefore, OBS has a bit of a fail-safe in falling back on its broadcast data feed, which can help plug some data holes in a last-minute streaming push.

“For a broadcaster coming to it for the first time, it’s quite a beast,” Millington says. “It’s one thing doing it for, say, the World Cup, where you’ve got one sport going on, but doing it for multiple sports all at the same time, with different number of units per session, etc., it’s a lot more complicated.”

Already planning for the 2020 Tokyo Olympics, Millington is hopeful that his department will be able to deliver a more robust offering of APIs (application-programming interfaces) and SDKs (software-development kits) to further accelerate content/data offerings and the customizability of the products for its rightsholders.