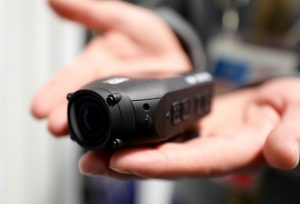 ORF Austria is on hand at the PyeonChang Olympics with a team of 110 that is doing it all — TV, radio, and Internet coverage — for winter sports fans back home. But they also have on-air talent that does something no one else does: skis down the downhill and other courses literally minutes prior to the competition with a small handheld (or helmet cam for slalom events) not only recording POV video but also commentary to give viewers back home a first-hand account of course conditions.

Hans Peter Trost, ORF, head of sports TV, says that the cameras record the content on cards and that at the bottom of the hill the video and audio file is transferred back to the IBC for playout.

It’s all part of an effort that has a production team doing what very few broadcasters at the IBC are doing: producing all of the content from a control room at the IBC and sending a ready-to-air signal back home to Vienna where master control handles final play-to-air and commercial insertion.

“There is no remote production,” says Trost. “We have one control room, so everything comes to here and then is sent on three lines home.”

And as a nation that loves a large number of the winter sports, most notably anything that involves going down a hill or skis, the 650 hours of coverage ORF is delivering is resonating with viewers.

Robert Waleczka, ORF head of operations, says that coverage is on two channels: ORF1, the national broadcaster’s main channel and ORF Sport+. By law the most popular sports need to air on ORF1. That means that Sport+ has some of the less popular sports and, if needed, simply broadcasts content from the Olympic News Channel which is available from OBS and is ready-to-air content.

The ORF studio is located at the Austrian House, and arguably every broadcaster should be so lucky as to have a studio at the national house. Houses tend to be a hotbed of activity for each nation with VIPs, celebrities, and, most importantly, athletes spending time there.

“It’s a good situation for us as we work closely with them and it makes us possible to have athletes as soon as possible in our studio,” says Trost.

The last couple of days have been challenging for everyone as the alpine events have been delayed due to dangerous wind conditions. Events like the men’s downhill are tremendously important to Austrian viewers but the ORF team gives Olympic organisers credit for postponing events early rather than attempting to wait out the conditions.

The postponed events are setting up what Waleczka calls “Super Thursday,” when the women’s giant slalom and the men’s downhill will be run on the same morning. Thankfully for ORF they have separate commentary teams for the men and women alpine events so there will be no need to have a broadcast team call an event off tube.

Adds Trost: “Our talent does a lot of different jobs, one day doing commentary, the next a reporter, and the next being a host in the studio. It’s very different from the way others do things.”

In addition, says Waleczka, nothing is scripted, giving viewers a more natural and spontaneous experience.

Martin Krischke, ORF producer, says that Adobe Premier CC on Macs plays a key role in IBC operations and Claudio Bortoli, ORF supervisor, production management TV, says that five XT4 servers with 12-16 channels each record incoming feeds from OBS with two in the control room playing back highlights and recording the most important feeds and the other three recording content from other relevant feeds. German integrator Sono VTS was responsible for providing all of the technical facilities at the IBC, including a Harris routing switcher and Riedel intercoms.