Live from PyeongChang: YLE Finland leans on EVS and Lawo for broadcast and OTT output

YLE, The Finnish national broadcasting company, is on hand for the 2018 PyeongChang Olympics with an operation that is very similar to its 2016 operations with one big exception: the team is not sending the OBS multi-channel distribution service (MDS) of various feeds back to Helsinki but is, instead, readying up to 12 feeds at the IBC and then sending them to Helsinki.

“We feed everything from here because it is less expensive,” says Kaj Flood, YLE, senior technical advisor. “We bring in all the audio from the commentary positions and audio and video from five mixed zones via 1 Gbps lines with Lawo Remote4 for the IP transmission.” 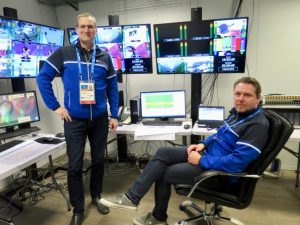 Back in Helsinki an OB truck parked outside of the YLE broadcast centre is the entry point for all the content coming from PyeongChang. The truck produces one channel of coverage (about 20 hours a day, from 3 a.m. to 11 p.m. Helsinki time).

“It’s our own truck and is a full-size double expando, the biggest one we have,” says Flood. “It has a full-size Lawo audio console and we also have audio sent via MADI and RAVENNA [via NetInsight Nimbra gateways] which I think might be a first from here. But RAVENNA has very low latency and we have had no problems so far.”

A second channel of Olympic content is produced out of a control room in the broadcast centre and a large EVS farm in Helsinki is also being used to ready content. Flood says current plans call for YLE to do much more with EVS at the Tokyo 2020 Olympics. Three smaller control rooms in Helsinki produce content for delivery via YLE’s app and streaming.

“We have discovered that if we do the app ourselves rather than use the OVP we can have all the sports we want and also have our own videos in the same portal,” says Flood.

The app and streaming are also exceptionally popular in Finland with some less-capable Internet service providers actually banning the player as viewership during the day, when people are at work, rises to high levels.

Flood says about 70 people are on hand in PyeongChang with an additional 200 back home split across three shifts to deliver Olympics action to Finnish viewers. NEP Finland supplied the equipment in the IBC that includes a small AR studio that allows for commentators in PyeongChang to be virtually inserted into the main studio in Helsinki.

“AR has been successful here and we will increase the use of AR,” says Flood.