Live from Qatar 2022: Director Jamie Oakford on giving viewers the best seat in the house

Jamie Oakford is one of six directors charged with overseeing host broadcast coverage of Qatar 2022. Oakford, whose CV includes previous World Cups dating back to 2002, the Euro 2020 Final, plus the Champions League and Premier League, spoke with SVG Europe in Doha about his experiences so far of the Qatar 2022 World Cup.

During the final round of fixtures in Group H, South Korea beat Portugal 2-1 with a dramatic injury-time winner. But the drama didn’t stop there; because of FIFA’s directive to make sure all stoppages for goal celebrations, injuries, VAR checks and time wasting are added to the end of matches, the other tie in Group H between Ghana and Uruguay still had another 10 mins remaining.

That meant South Korea had an agonising wait to wait to find out whether they would claim second place in the group and progress to the round of 16, or if Uruguay would score another goal to leapfrog South Korea into the knockout stages. 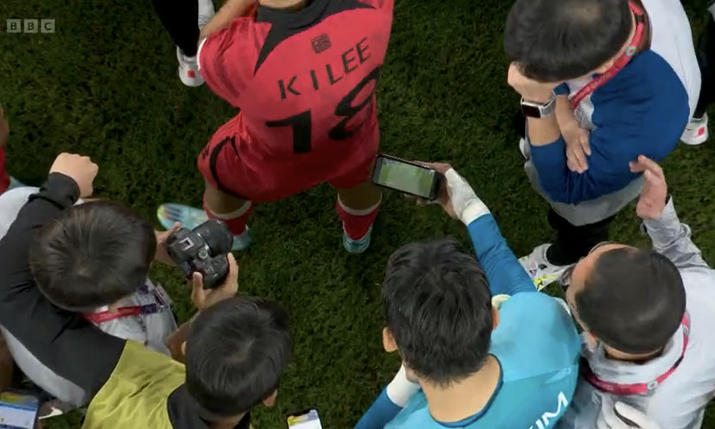 “It created some unbelievable drama that we haven’t had before,” says Oakford. “The South Korea players were all congregated in the middle of the pitch in a huddle, checking their phones to find out the score. So we picked out the players and the nervous fans in the stands, and stuck with it.

“I’ve directed hundreds of games but there will still always be a game where something surprises. I don’t think I have ever directed anything like that 10-minute period. There wasn’t a football on the pitch, but there was still so much drama. That is what the World Cup gives you.”

The host broadcast directors are responsible for overseeing the Extended Stadium Feed which, which begins 70 minutes prior to kick off and follows a set running order so that rights-holding broadcasters know when they can insert their unilateral coverage.

In Doha, Oakford is working with a core group of camera operators, producers, EVS operators, vision mixer and assistants who he regularly teams up with in the UK for BT Sport’s coverage of the Premier League, Champions League and Europa League. 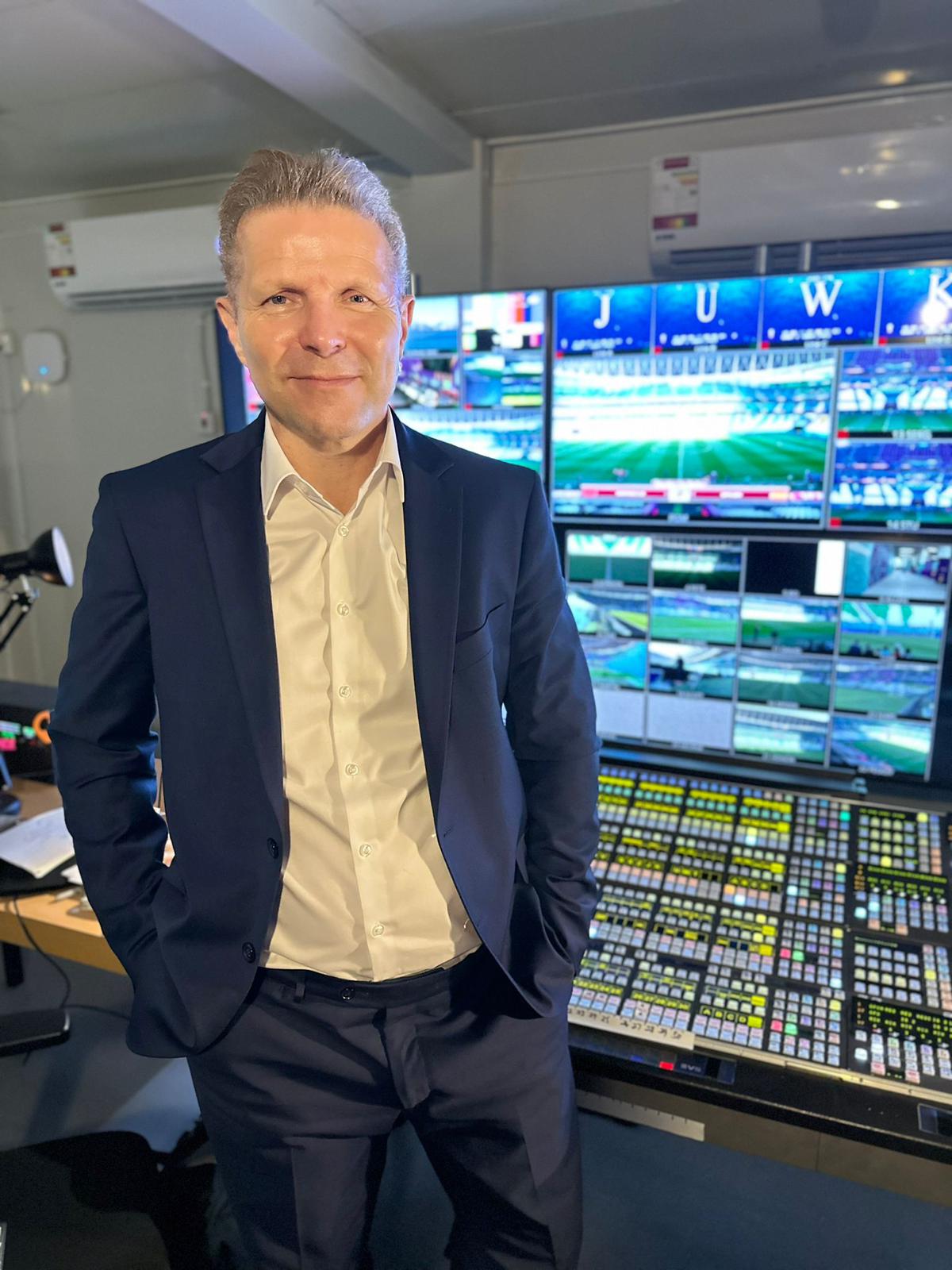 “We’re very lucky; when I started out, there were only a few live games. Now, there are 20 a week, so the quality of people available to you is much greater. I’m working with people who do this week in, week out and to a very high standard. We’re privileged to have such an amazing team.”

“When you do a game of football there are certain cameras you need to know what they are going to do in certain situations. There is a core group of ten operators it’s good to work with regularly so you all understand that. They are more of your live cameras.”

The standard camera plan for all matches at the 2022 World Cup features 42 cameras. “We have eight super slow-mos, two Polecams, two Steadicams, two jibs, a Spidercam, fan cams, manager cam which means there is nothing you can’t get. You’re going to get great coverage of goals, great fan shots, reactions from managers, detail in replays – there is an abundance of riches to choose from.

Compared to 2018, new additions to the camera plan are two roaming cine-style cameras with a shallow depth of field that film fans outside the stadium, then move inside to shoot players in the tunnel before capturing footage of fans cheering and reacting to the game. 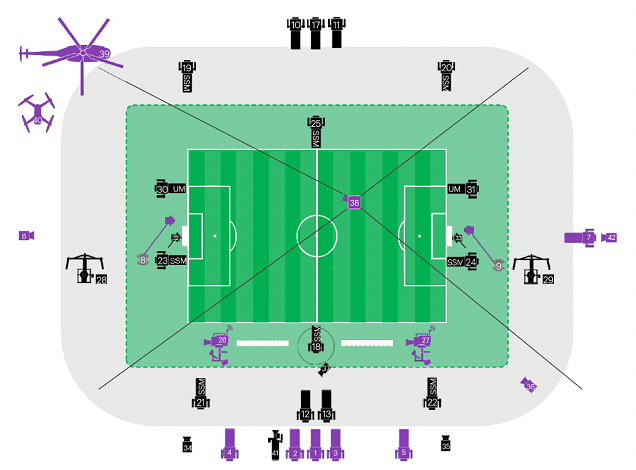 The standard camera plan for World Cup matches is built around 42 cameras.

“We used to have a cable camera in the tunnel, but you were limited in what you could do. And Steadicams are quite clunky things to have around. Now, we have much more mobility in the tunnel, and the clarity of the pictures is incredible.

“We’ve learnt how to use them better,” adds Oakford. “When we started off, we were too brave and the focus moves very quickly on them, so we have backed off a bit. And it’s given us some of the best fan shots I’ve ever seen at a World Cup.”

There is a general feeling among senior figures at host broadcaster HBS and the directors SVG spoke with that, at 42 cameras, the number of cameras used to capture the live action is approaching the limit.

“You could add more, but would you achieve much?” asks Oakford. “I don’t think there is really much more you can ask for. Access is the one thing I would like more of. This year, they have been able to film the teams arriving from inside the dressing room for a moment, to get a feeling for what goes on in the dressing room. That’s not part of our feed but it is intriguing to see a player like Mbappe and how he interacts with the rest of his team. So seeing players get off the coach or in the tunnel is really interesting.

“The cine-style cameras (which are part of the Extended Stadium Feed directed by Oakford), because they can move around more easily, they were right outside the dressing room so we got to see Harry Kane and four or five England players for a few minutes  before they went out on to the pitch. Glimpses like that are bits of gold dust to me as the director, because it provides some insight and a view you don’t always see.”

Oakford says his intention when he’s directing is to give viewers at home “the best seat in the house”.

“I’m an unfussy director, I don’t like cutting when it’s unnecessary. As a fan, I like to see what is going on in the game, so I prefer to cut when the ball has gone out of play. During the game, when the ball is in play, I probably only use six cameras; the master shot, three close-up cameras and two Steadicams.

“I don’t like leaving questions unanswered. So when there is a question as to whether it was offside, or handball, I try and put myself in the position of being a fan of both sides. That means I am quite aggressive with replays and as soon as something happens I will call for a replay from my replay director.

“One thing I have really tried to do this tournament is avoid shots of the back of a player’s head. Usually, most cameras are positioned on one side of the pitch so when a player is down injured, or being booked, you might not have the best view. Because we have so many cameras here that is something we have tried to rectify.”

Oakford was calling the shots for the England v Senegal game, which featured the colourful outfits, drumming and dancing of the Senegalese fans.

Says Oakford: “We tried to show the contrast between the Senegal fans and the England fans, to show there was such a different way to watch football. Also, the contrasting style between the two managers, with an animated Aliou Cissé and the more reserved Gareth Southgate.

“I’ve directed Champions League games, and the Italian fans are always noisy but with Senegal, there was constant noise and dancing, jumping and singing, and that’s not something you get in any other competition. It contrasted well with the England fans in their usual white shirts.”