The French Open is being produced in 3D for the third consecutive year, and, as with the previous two, a new production partner, Euro Media Group, is providing the technical services to capture and produce images that will be delivered around the world. 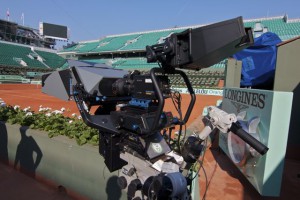 Six 3D cameras are capturing all the action at Roland Garros during the two-week tennis tournament.

“The 3D market is still a niche market so we developed a group to work on a European-wide basis, gathering people from different nationalities to share equipment and knowledge,” says Ronald Meyvisch, Euro Media Group, new technology officer, who has been involved in 3D development for three years.

The company has developed 11 of its own 3D rigs with Microfilms of France that couple Sony P1 cameras with Canon lenses.

“The advantage of our rigs is, they automatically align the cameras and deliver perfect 3D without electronic processing and instead use optics,” he explains. “Other companies move the cameras to correct for optical errors, but we have developed a system that moves the mirror and controls the groups of lenses.” 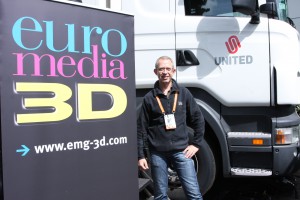 By coupling the ability to move the mirrors with Canon image-stabilizing technology in the lenses that moves the lens element rather than work in a stabilization mode, Meyvisch says, offset of only one vertical pixel is achievable on a consistent basis. When using standard lenses without image-stabilization technology, the rigs rely only on the movable mirrors and will not match the performance of the Canon stabilized lenses. For rig alignment, an electronic image processor outputs all offset data from the two cameras to Total Control’s onboard computer. Images can be offset horizontally, vertically, in scale, and in rotation. The computer receives all offset data and stores all the offset correction values needed for lens matching

Three of the mirror-based Total Control II rigs with OLED finders are being used for the 3D coverage at Roland Garros, along with one Stereotec side-by-side rig for wide shots and two Panasonic 3D camcorders for shots of fans and other non-match needs. Ten Sony MPE 200 processors are also on hand for quality control and to convert 2D shots to 3D. The camera signals are mixed on a vision mixer in OB truck United 15, from the Dutch subsidiary of Euro Media Group.

“The truck is just an HD truck, and, the way we developed 3D, it can be done with any HD truck because we have all the equipment rack-mounted so we can set up as a standalone operation outside of the production unit,” he adds.

The company also developed a new fibre system that sends power, signals, and controls over one fibre cable and can also operate with other side-by-side rigs. 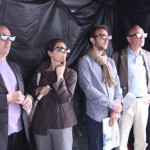 3D viewers at the French Open

“The form factor of our rigs is a lot smaller than others so we can get a lot closer, and we also don’t lose any resolution because of electronic processing,” says Meyvisch.

He adds that tennis is ideal for 3D because the field of play is fairly compact and the ball tends to be coming towards and going away from the viewer whereas the lateral coverage of a sport like football does not take advantage of the 3D format.