Cedric de Saint-Martin, France Télévisions, digital innovations engineer, and the innovation technologies division of the French national TV service, are on hand at Roland Garros testing a number of new innovations, not the least of which is live VR coverage thanks to technologies from three French-based companies: a  VR camera system from Videostitch, integration of digitally inserted graphics via Push-Pull TV; and encoding courtesy of cloud-based service FireKast. 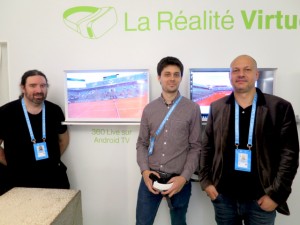 “Last year we experimented with VR and the feedback was that the VR quality was not very good but the experience was good so we wanted to continue and improve the quality and scope of VR,” says de Saint-Martin. “Our goal is to eventually make it so that the production team can do it rather than the innovations team.”

The coverage begins with the Videostitch Orah 4i Live VR camera that is mounted on top of the sun shade above the umpire chair on the three top courts: Philippe Chatrier, Suzanne Lenglen, and No. 1 Court. The camera has four cameras that record at 2,048×1,536 pixels each and 30 frames per second. It also measures less than three square inches, weighs only 17 ounces, and is currently priced at $1,995.

“The camera signal is sent back through fiber to the broadcast center where we stitch the different camera images into one 4K image,” explains de Saint-Martin. “We then put a logo onto it and graphics. FireKast then encodes it live and sends it to the cloud where it can them be published to different applications.” 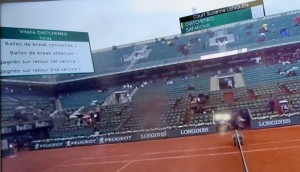 Even amidst the rain drops of a rain delay the inserted Push-Pull TV graphics for the 360 video application delivers for fans.

Serge Dulin, Push-Pull TV, co-founder and general manager, says that Push-Pull’s graphics insertion technology is being used to lay graphics into the live video for both the VR app (RG360, available in the Apple, Android, and Samsung Gear stores) and then testing an application that will bring not only the 360 video but also the graphics insertion to digital cable set-top boxes. The latter will allow for viewers at home, eventually, to access the 360-degree view on the TV set. One potential application? The 360-degree view could be located in a picture-in-picture view so that viewers can play director in one picture while watching the main production in the other.

Jean-Noel Gadreau, Push-Pull TV founder, says that the Push-Pull system is pulling in hundreds of data points (like score, aces, double faults, etc.) and then delivering them to virtual digital scoreboards that can be inserted into the image and look as if they are part of the physical structure of the court.

The use of all the technologies at Roland Garros embody a movement towards making the VR experience not only more compelling with personalize content like statistics but also making the experience easier to create.

“The installation of FireKast on site is simpler than having three 4K encoders on site because the cloud service can publish the VR streams to different bit rates so that anyone can view the stream, even if they don’t have the bandwidth to view the 4K signal,” says de Saint-Martin. For example, the 360 coverage is also available at YouTube but YouTube resolution maxes out at around 2K.

The Roland Garros 360 app is called RG 360 and is available in the French Apple app store and Android store.