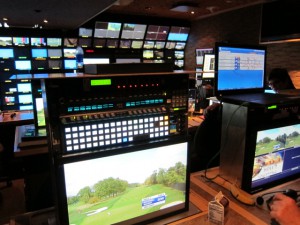 Corplex Chromium’s main production area will be home for European Tour Productions and CTV OB during the Ryder Cup.

Two years ago it was up to the production team at European Tour Productions and CTV OB to oversee a Ryder Cup production that was about as water logged as a golf tournament can get. This time around the efforts on the front end have been a little bit easier as NBC Sports plays the role of host, allowing ETP and CTV OB to focus more squarely on their own audiences needs. And it has been US-based OB provider Corplex that has been at the center of those efforts, providing the production units that ETP and CTV are calling home for the tournament.

“From a technical point of view it has been a lot easier and Corplex has looked after our needs very well and there haven’t been any surprises,” says Hamish Greig, CTV OB technical director. “They’ve done a really good job for us.”

Corplex is providing four units: Chromium, Nickel, Iridium, and Zinc while Total RF5 is on hand for RF needs. Chromium is home to the core production unit and audio as well as a “super iso” replay area that will have three EVS operators keeping track of player reactions and crowd shots on Sunday when the competition expands to 12 singles matches.

“Corplex has been excellent and is probably the best [US-based Ryder Cup partner] we have had,” says Tony Coxon, European Tour Productions, head of production operations.

The main video submix is being handled in Nickel, with four replay positions focusing on shot coverage while Iridium is home to the audio effects, feed recording, virtual eye graphics, and camera shading. Zinc is handling world commentary as well as Telex intercoms and the Total RF truck is home base for the communications and wireless mics. Broadcast RF, which supports all CTV OB golf operations for European Tour Productions, is on hand for wireless camera needs while PSSI is handling satellite transmission responsibilities. 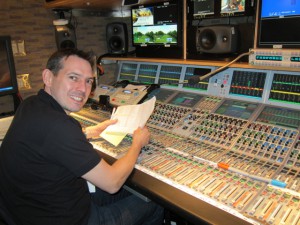 The six RF cameras are complemented by 34 Sony HDC-1500 cabled cameras and the team also has access to NBC’s cameras, including specialty cameras like blimp shots, and RF and specialty cameras deployed by BSkyB for its 2D broadcasts.

With the weather (thankfully) not a factor this weekend the biggest issue becomes managing the variables of play as Ryder Cup matches typically do not play out for an entire 18 holes.

CTV is creating four feeds: a clean feed,  dirty feed, a dirty feed minus ticker for BSkyB, and then a clean feed with transition wipes. Three For.A frame rate converters are also on hand to convert the clean and dirty feeds from 1080i/59.94 to 1080i/50.

European Tour Productions flew its core production team over from Europe, removing the variable of working with production staff that is unfamiliar with the ETP style of production.

Coxon, says that the camera complement is similar to an Open and that his team and the NBC Sports team worked closely on camera positions, the placement of camera towers, and wireless plans.

“We don’t get in each others way and if we have two RF cameras on a match we’ll share those pictures,” he says.

Today and tomorrow only feature eight matches (four at any one time) but on Sunday Coxon says the action for all involved will heat up.

“On Sunday 12 matches hit the course and every match is important,” he says. “It’s complete bedlam from start to finish.”

While the Ryder Cup signals the end of the golf season for US broadcasters and the PGA, the European Tour continues next week and really never ends as there are events in Asia and the Middle East (“We chase the sun around the planet,” quips Coxon). But for the next three days all eyes are on Medinah, Illinois.

“This has many more viewers than the other tournaments and this is the peak,” he adds.