From the outside looking in the Ryder Cup may not seem like a golf event that would require a massive TV production effort. Until the final Sunday only 16 golfers are on the course at any one time (and on the final Sunday the max is 24). But the importance of the every-two-years event, which pits 12 golfers from the U.S. against 12 golfers from Europe and the need to give each continent a production that meets the needs of their viewers, requires a massive effort that includes almost 1,000 miles of fibre, 900 production staffers, more than 185 cameras, and a production compound with dozens of production trailers, trucks, and satellite vehicles. 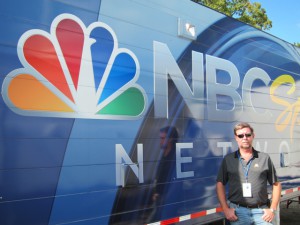 Ken Carpenter of NBC Sports is playing the role of host broadcaster at the 2012 Ryder Cup.

“We have fiber for pretty much everyone and if we weren’t sharing it I don’t think there would be enough fibre in existence to meet everyone’s needs,” says Ken Carpenter, technical manager for NBC Sports golf coverage. NBC utilities laid down the fibrr that is provided by CP Communications whose team then helped terminate the cable runs.

Because the Ryder Cup is in the U.S. this year (at Medinah Country Club in Medinah, Illinois) NBC Sports plays the role of host broadcaster. They are joined by ESPN which is broadcasting the first day of coverage today (NBC handles production of all of course coverage), the Golf Channel which is broadcasting shoulder programming around NBC Sports coverage, and Turner Sports which is on hand for Internet streaming coverage. And then there are the European broadcasters: European Tour Productions which produces a core feed for European broadcasters, BSkyB which is handling live coverage for the UK and also producing 3D coverage, and the BBC which is creating a two-hour highlights package that runs as soon as the final put drops. All told, more than 900 broadcast production professionals are on hand to deliver what is arguably the most compelling tournament in golf.

NBC Sports also has a great partner on the production in the form of European Tour Productions (ETP). NBC Sports has 49 of its own cameras while ETP has 40 of its own. But all cameras are available via NEP’s ESU, giving the NBC Sports production team a wealth of options when it comes to crafting the story of the 2012 Ryder Cup.

Live Power, for example, provides generator power for everyone in the compound and NBC Sports is also able to have the camera scaffolding company extend the rate NBC pays to ETP.

NEP’s ND4 truck is the main production area for NBC’s efforts while NEP ND5 handles video overflow of EVS operators, graphics, and other needs. Two CP Communications trucks, RF6 and RF8, are also on hand for fiber and wireless needs for the long hours of coverage. Transmission to the NBC broadcast center is via Calhoun satellite and AT&T fiber.

“It’s grueling as there are 36 holes of golf on Friday and Saturday and 12 twosomes on Sunday,” explains Carpenter.

The Ryder Cup is unique among golf tournaments as it features teams of 12 golfers from the U.S. and Europe competing against each other in three days of action. The first two days feature four matches each called “foursomes” and “fourball” while the final day is comprised of 12 singles matches. The tournament also does not use stroke scoring but instead involves players winning and losing holes. The result? All of the matches may end earlier than 18 hole as a team that is up 5 holes with only 4 holes to play have already one the match and the match ends at that point.

The unique format also means that there are only four matches in the mornings and four matches in the afternoons on Friday and Saturday. As a result, NBC Sports and ETP don’t need to have cameramen stationed on all 18 holes. Instead, 35 cameramen for NBC and 30 for ETP will move from one hole to a later one once the action at their hole is complete.

“[Getting through] the crowds at an event like this are always the challenge and the production team has to do an educated guess as to how far it will take to get from one part of the course to the next,” explains Carpenter. The required buffer means that the cameraman on the first green tomorrow will also go to 11 or the Super Motion camera person works on holes one, six and 16.

The vast majority of the cameras are manned but there are two robotic cameras are located in the water at the second and 13th holes. “They are there to cover balls that roll back into the water as we can’t see the water from our green cameras,” says Carpenter.

While the images are often the biggest part of golf coverage the Ryder Cup format makes audio nearly as important. First, there is the nature of the competition which features a lot of conversation between the players and caddies as they discuss shot selection and strategy (on the second hole of the first day, however, fans were treated to a less-than happy debate about ball placement). Six parabolic microphone dishes will be with the groups on Friday and Saturday with that number expanding to 12 on Sunday.

The emphasis of on-the-course audio and video coverage has led to some issues with respect to RF management as the Chicago airwaves are already dense with wireless traffic. It also introduces the biggest production challenge: managing the explosive crowd cheers as nationalism replaces the polite applause that can define a golf tournament.

“We call it the ‘Ryder Cup Roar’ and from an audio dynamics standpoint you go from hearing crickets chirping to a deafening football-stadium like roar, “ says Carpenter. “The big challenge is managing those dynamics.”