The fast, high-tech F50 catamarans of SailGP came to Europe for the first time last Sunday in blustery conditions resulting in “the most exciting racing of the series so far,” according to one of the commentators. The three races were all won by Australia, with boat speeds approaching 60mph/100kph at times.

Weather is a constant challenge for the remote production, meaning “schedules change with little notice, so we have to be flexible,” said Nick Buckley, head of operations, Timeline Television. “If the wind is too light, there’s no point having the race. If the wind’s too strong they become dangerous, so they cancel it,” as happened for Saturday – when all racing scheduled for the start of the Cowes Week regatta was abandoned. 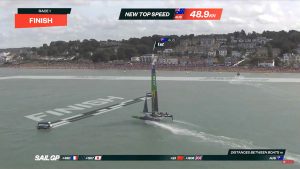 There are two strands to the work Timeline is doing with SailGP: the cameras on the boats, which it does for SailGP directly; and the remote production for Whisper Films, the production company. With its strengths in RF and having all the galleries and production facilities at Ealing Studios, in London, it is well placed to bring the two together. “I can’t imagine quite how it would have worked if they had gone with different companies to do those different parts, because we’ve integrated it quite tightly,” said Buckley.

Its remote production is one of the four nominated content creation finalists in the IBC2019 Innovation Awards Shortlist.

“There are two things you need for success in a remote production: one’s low latency, and the other is really good communications. Obviously we’ve got a low-latency data link, because the distance from here to Cowes is comparatively short, it’s only a few milliseconds of delay in the fibre path. That means that the talkback has no noticeable delay at all and the guys on the ground in Cowes are in a talkback network centred here, so everyone can talk to each other seamlessly over the Riedel talkback matrix,” he explained.

The latency of the fibre isn’t significant; even when the SailGP races were in Sydney it was only a few frames. This is thanks to clever coding. There are “up to four on-board cameras, which are encoded in H.265 on the boat, linked to the shore, where they are monitored, and the ASI, without being decoded, is then put straight on the fibre and actually decoded here [Ealing]. So, there is only one encode/decode cycle between the camera on the boat and the production gallery,” said Buckley.

“Typically, when you are doing an OB, you have multiple coding paths, because you decode into the vision switcher on the OB and then code for satellite. But we’ve taken out any excess coding, and that reduces the delay to the same value that it would be were you in an OB truck on site.”

The other cameras are fed over the fibre using J2K coding at 150Mbps with only about one frame delay (using Appear TV encoders/decoders).

Every camera comes back to PCR3 in Ealing, as there is no production on site. All the remote sources 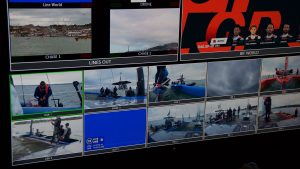 The main multi-view monitor in PCR3 before racing began, with outputs from various on-board cameras and the two chase boats

(on-board cameras, shore cameras, chase boats, helicopter, data and graphics) come in over a Tata diverse fibre network, with the BIF (Broadcast International Feed) produced in PCR3. “Everyone you see here is who would normally be on the OB in an OB truck,” said Daniel McDonnell, MD, Timeline Television.

Some graphics are done on location, by LiveLineFX. “These virtual graphics are tied to the water, ie the finish line, the course boundary. That’s data from the helicopter to track that graphic, and the graphic is produced by an engine at the OB, and comes down a video feed to us as a composite. So, we get the clean helicopter back here and the helicopter with graphics on, as a finished source we can cut to,” explained McDonnell.

However, it is more complicated than that, as it also has four Ventuz graphics engines putting the boundaries and finish line on in different languages and/or with different sponsor’s logos – for the Chinese, Japanese, European and world feeds. The European feed has fewer logos due to advertising regulations.

If it puts up a leaderboard in English, it automatically mirrors this in Japanese or Chinese. “In the mixer we’re making four different versions of the programme. We’re triggering automatic graphics, we are changing the wipe, so it says Replay in English, Japanese or Chinese, and the virtual graphics are changed in a substitution table, so the director just directs one output, but makes four different world feeds at the same time,” explained McDonnell. They chose Ventus because it is versatile, copes with the large amount of data received from the boats and “allows us to do a lot of automation” based on that.

The bespoke on-board cameras are housed in a waterproof pan/tilt/zoom mechanism where the camera is fed with pressurised dry air to avoid moisture. It is remote controlled down a single cable that carries the video output, and the external surfaces are all carbon fibre.

“We had to pay particular attention to the problem of electrolysis, which you get on boats, so extra insulators were added, which is something we’ve learned over the years from working on the America’s Cup,” said Buckley. He is very pleased with the resulting output.

They’ve got an integrated wiper in the base and tilt the lens down for cleaning. They had to avoid anything a rope might snag on, so the cameras had to have a smooth exterior, “which made the conventional wiper approach impossible.” It also has a fresh water spray, to deal with dried salt.

It uses the DTC Aeon wireless camera system, incorporating BWS Sapphire HEVC encoding/decoding, which is designed to minimise latency. The system can carry four HD channels or one UHD. “We asked DTC to optimise them for four non-synch HD sources, and they work very well.” The H.265 compression means you can get all that in about 20MHz “with pretty good performance,” he added.

There are four on-board positions (on the bow, the stern and either side – close in). Most yachts go with just two cameras, although the French F50 had three at Cowes.

“We couldn’t find [a camera] on the market that met the spec. We didn’t want a security-grade camera that was kind of jerky when you panned it, we wanted really smooth mechanics that you could pan and zoom on air, and something that was rugged enough to cope with the environment.

“Not only does it get deluged with salt water, but when the yachts are going at 40 or 50 knots there’s a lot of vibration. It’s not an easy environment to operate anything in,” said Buckley. Timeline had designed on-board cameras previously for the 2017 America’s Cup, and re-designed them for SailGP based on what it learned then.

Up to four of the five crew on each yacht wear radio microphones, and there is also a stereo effects mic. It has two chase boat cameras and a helicopter camera, all using Cineflex stabilised heads, plus a drone, which takes off from a chase boat. Everything is HD, although UHD has been discussed as a move for any future contract, but “it will involve a lot of changes,” he said.

What issues it has had have generally been around latency and remote production. Even so, the first event, in Sydney in February went smoothly, although it had its own challenges. The yachts raced around a tiny island, which was the only place it could receive the signals off the boats. They built a scaffold platform, and had to lay an underwater fibre across to the main site. 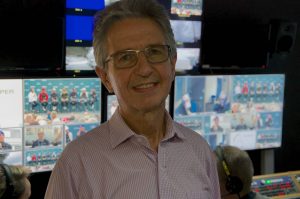 One issue in New York was the large number of other boats that arrived for the start of the racing. “Everything had been working fine in terms of the RF links off the yachts, and then these massive spectator boats suddenly appeared as the race started and blocked the signal,” said Buckley. Next year they will probably need a diversity receiver set up to cope.

Because Cowes is a venue from which Timeline has produced events before, there weren’t many surprises — and none caused by spectator boats, which weren’t allowed to the south (shore side) or east of the race boundaries.

Timeline is planning a further production control room the same size as PCR3 in an adjacent building, due in early 2020. “We have increasing demand for facilities here, particularly for remote production,” he said.

It does women’s football (WSL) in England (a four-camera shoot, which is directed remotely), Channel 4’s Formula One coverage, and other remote productions it can’t talk about. “We’ve certainly demonstrated that it can be done very effectively,” said Buckley.

A really good data connection is fundamental, which Tata provided for SailGP, with 1Gbps on each of two separate routes for full redundancy — although there was also a simple uplink and the ability to do a basic presentation if both fibres went down. For women’s football it doesn’t go to that level of resilience, using conventional internet feeds with 4G as backup – although that does mean the cameras aren’t synchronised as you don’t have direct control of the path, which needed a work-around. He thinks that 5G will be a game changer for remote production, opening up a lot of new possibilities.

There were only about 20 personnel on site at Cowes, whereas a conventional OB would have meant accommodating more than 100, raising costs and increasing its carbon and space footprints considerably – a problem in Cowes, where a big compound would have been difficult.

He believes that remote productions will have a big impact on what OB trucks it will need in future, as they will not need big production areas. Indeed, Timeline recently adapted one of its satellite trucks to handle an eight cabled-camera remote. “They’ll just be supporting the cameras and linking them back. They won’t need much in the way of replay facilities perhaps, and they’ll be simpler,” said Buckley.