MotoGP rights holder Dorna Sports is evolving the motorbike racing world’s technology and reach with some help from Tata Communications. SVG Europe visited Silverstone last weekend where MotoGP was in residence for the British Grand Prix, to find out how Tata has been working with Dorna to move MotoGP forward in sports broadcast. 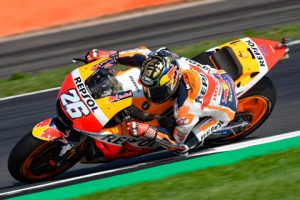 Dorna Sports has been the exclusive commercial and television rights holder for the FIM Road Racing World Championship Grand Prix (MotoGP) since 1991, along with the MOTUL FIM Superbike World Championship (WorldSBK), the FIM CEV Repsol, the Red Bull MotoGP Rookies Cup, the Idemitsu Asia Talent Cup and the British Talent Cup. This is now Tata Communication’s second season with Dorna on MotoGP and WorldSBK. Tata distributes the motorcycle road racing action from five continents to over 80 media partners, reaching over 200 million households, using its global superfast fibre and satellite network. 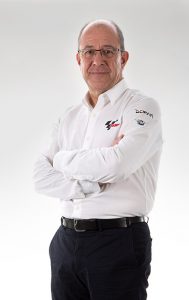 Manel Arroyo, managing director at Dorna, commented on how Dorna first got involved with Tata: “The fast evolving [technology] in this industry means we had to think of new strategies, so we were looking at companies bringing elements we don’t have, who can evolve and explore with us in new ways to improve our delivery to broadcasters. Until [Tata] we were in the hands of a company that only did the delivery. We wanted a company that could do more, and improve our platforms.”

According to Brian Morris, vice president and general manager of global media and entertainment services at Tata Communications, “Dorna was looking at how to evolve their distribution communications. Before they used EBU for satellite, but they wanted to look at the maturity, efficiencies and cost structures allowed by fibre, so they got in touch with Tata to find out more”.

Tata worked on proof of concept projects with Dorna initially, including remote production, and then rolled those projects out. One of those projects was also the Dorna TV compound, which Arroyo said has been opened up to become a laboratory for the TV industry, from RF camera lenses to editing. “The biggest companies in the industry are working with us,” he noted. 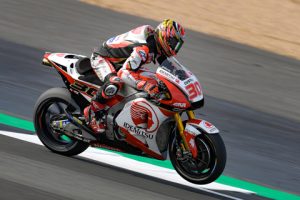 Dorna is a long-time feature in the virtual broadcast world. It started to deliver video to computers in 2000, said Arroyo. “We know a little bit about it,” he stated. “We decided to find a new way to interact with fans. Now, other motorsports are getting into it,” he noted, referring to the likes of Formula 1. He added: “We have 22 million fans now on the three main platforms, Facebook, Twitter and Instagram.”

MotoGP is in its second eSport season now. Commented Arroyo: “ESport is a competitor of the sports but we have to mess around with it. We are working on eSports because we know we can catch certain new fans with it; eSports is a way to attract new audiences to MotoGP. Developing new ideas is essential. Next year we will start a new Championship, FIM MotoE [electric motorbike] World Cup.”

For sports broadcasters, Dorna is all about innovation and quality. Commented Sergi Sendra i Vives, Dorna’s media content and production senior director: “The goal here is to produce an international feed over fibre or satellite, with the same configuration, to ensure quality, stability and efficiency, so anywhere in the world gets the same high quality. We use 60km of cable, with 30km going to the cameras on the track here at Silverstone and 30km for fibre onboard camera. We have 175 to 185 cameras here, installed in different devices to catch all the action, from cabled cameras to RF cameras, and a lot of onboard cameras. Those numbers are crazy compared to any other sport.”

Dorna currently uses four onboard cameras on every motorbike – front, rear, amusingly-titled butt, and helmet cameras – weighing a mere 1.75kg. “We have the most equipment on any bike,” claimed Sendra i Vives.

The history of Dorna and cameras began when it won the rights to MotoGP, back in 1991. A company made the first wireless camera system for motorbikes in 1985; the Rothmans Honda NSR 500 Onboard Camera was a Hitachi camera with a Fujifilm lens. The transmitter and battery were stored in a ‘secret compartment’ in the fuel tank, which meant two litres of fuel were lost. At the Assen Circuit Race Day on 29 June 1985, driver Randy Mamola won, with his camera intact. Since then Dorna has stayed focused on developing camera technology further, bringing development inhouse. In 2007 it went from analogue to digital, cutting out the need for a helicopter in the sky to get coverage from the onboard bikes to the TV compound, in 2010 it created a gyroscopic camera, and in 2011 it went to HD.

Today, with Tata, Dorna is also working on 360 degree live viewing for fans using a specialised camera built inhouse at Dorna. “You are the passenger on the bike, live in the race,” noted Sendra i Vives. The image from the 360 degree camera on the bike is sent using four HD signals to the master control, then over the Tata network to Barcelona where the images are is stitched together using Dorna’s own software, and loaded onto a website. “There is currently a 20 second delay, but we’re looking to reduce that,” said Sendra i Vives. “This is a proof of concept. We tested it first in Valencia in 2016. You can’t put a camera yet on Messi or Ronaldo, we we can take the profit from bikes using cameras and data. That’s very important,” he added.

Morris stated that Tata is currently working to reduce the latency on the 360 degree live experience. “This season our innovation with Dorna means we can cut that latency by half,” he said.

This year Dorna has begun doing more remote production through its partnership with Tata. Last year it trialled two people working on MotoGP weekends remotely in Spain, and this year there are five people in Dorna’s office in Barcelona; one adjusting camera angles on bikes, two on graphics with just a 0.5 second delay, and one adjusting RF cameras. “We are now working on new challenges,” said Sendra i Vives. “More people could be in Barcelona. We are looking to double the current number.”

The company is continuing to be innovative, with the Dorna Motion Tracker, software that attaches software on top of live objects for live graphics, shortly to be licensed by a manufacturer. 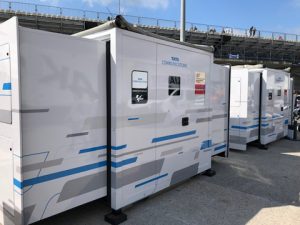 To deliver the vast amount of content being generated at the trackside, Tata has bought pods to MotoGP. Commented Martyn McKenna, director and head of delivery for media services at Tata Communications: “In 2016 we were using a portacabin full of  racks, monitors, connections; it took us a while to connect it all, and it had to be rigged and derigged 18 times a season. That was hard on equipment and staff.”

The use of the pods has, for Dorna and Tata, resulted in a far less demanding world tour for the MotoGP season. McKenna said that the pods, “significantly reduce the rigging and de-rig times (over two days are saved with a pod compared to using flight cases). Also, there’s a lot less stress damage to kit and cables as a result of rigging and de-rigging continuously, a more comfortable environment for our team to work in, and we have greater ability to scale as we have room for additional equipment.”

Now, Tata Communications is running two pods specifically for Dorna. The first is the Transmission Pod, which holds all of the equipment required for communications outside of the track. It has been designed as a 1+1, meaning fully redundant in all aspects including: power (technical power, supported by generators and UPS), dual fibres at Silverstone delivered from different exchanges and routed different paths around the globe, redundant video encoders, redundant fibre termination equipment and satellite transmission equipment.

Key components of this pod are: it is expandable (shrinks to allow it to fall within airline container size for flight); 100% redundant; holds customer termination equipment, fibre transmission, video encoding and decoding, and satellite transmission; it can work independently without operational staff, instead being controlled remotely from Tata’s operations centres in the UK and India; low latency encoders to facilitate remote production; and has a climate control system checking the temperature and humidity of each rack. 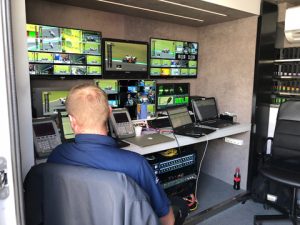 Pod life gets real with Tata for Dorna at MotoGP

The second pod is the Operational Pod (UBC). This pod holds the operational and monitoring equipment. There are generally four resources that are housed in this pod: the service manager; fibre engineer; satellite engineer; and Dorna representative.

The Operational Pod has very little equipment and has been designed to be silent to allow for communications within the team, as well as facilitating long working hours.  McKenna commented: “The guys can be in here for up to 15 hours a day.” He added: “Each operational resource has their own ‘station’ providing monitoring equipment for their role.”

McKenna continued: “This pod has also been designed for ease of use. Due to the volume of sessions, automation is key. We have features such as automatic BISS code changing via a pre-programmed schedule. This changes BISS encryption automatically on the decoders at all broadcaster locations when a new session starts. Also, Dataminer is used to monitor every piece of equipment in the pod and along the transmission chain. This shows a RAG status of each piece of equipment so that anything from a failing fan to a fibre cut can be diagnosed within seconds.”

However, despite all the technical expertise at Silverstone for the British Grand Prix, this year the track failed; for the first time since 1980 at the Salzburgring, MotoGP’s organisers were forced to cancel a Grand Prix after heavy rain fall left the newly surfaced Silverstone circuit unfit to race on last weekend. Racing was initially delayed, then cancelled, following bad weather last Sunday. Better luck next time.