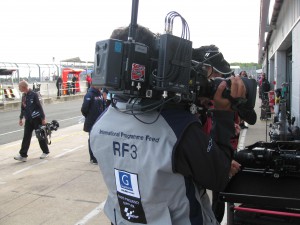 Previously, if you wanted to get live broadcast signals back from a UHD camera you had to use cables; but last weekend’s MotoGP at Silverstone has changed all that with the first ever use of 4K wireless links (from two cameras in the pit lane). The systems were developed for use on the new BT Sport UHD channel by Vislink, and will be available as products later this year. The event also saw BT’s first use of satellite contribution links for UHD.

Vislink has been developing its UHD encoder for two years, and started seeing images from a prototype UltraCoder system three months ago. “The engineers have been very excited to see the quality of the images, particularly at the very low bit rates,” said Ashley Jackson, Vislink’s VP of Engineering.

It has also now developed its own UHD UltraDecoder. Initially these were going to be purely satcom products, due to the high latency (which started at about 7-9 seconds), but as that was pulled down to three, and in the last two weeks to just under one second, it has become usable for broadcast too, with BT pushing them to get it ready in time for Silverstone.

“The latency has come down quicker than H.264 did when we started developing that,” allowing it to develop the wireless camera in parallel, he added.

The system used the standard Vislink RF infrastructure MotoGP’s Italian producers, Dorna Sports, had in place, “so we are literally adding a decoder in place of our existing H.264 decoder to produce the UHD. The RF parameters have not changed at all. We’re using the same bandwidth and the same bitrate as HD — 16Mbps [of H.265] in an 8Mbps wide DVB-T stream. And the results are astonishing,” said Jackson.

“The biggest thing we’ve noticed is the visible artefacts. When you start pulling the bitrates down in H.265, you notice the way the artefacts are managed is much, much less noticeable than it is with H.264. The step from MPEG-2 to H.264 was always a slight disappointment. We never actually saw that twice the amount of bandwidth saving, but with H.265, we’re actually seeing completely the opposite, and we think it is four- to fivefold visually. That’s how we’re managing to offer 4K UHD wireless camera systems that have the same robustness, and 4K quality, for the same bitrate performance as HD,” he explained.

“From the camera we have quad HD directly to our encoder, then we encode and pass that out as ASI, for a completely standard Vislink radio camera system, end to end.” This is transmitted as a unified picture, rather than in quadrants.

Right now, “compression through the HEVC encoding it still the biggest challenge — getting it down to the right latency to use it in a live presentation,” said Andy Beale, Chief Engineer, BT Sport. “Here we’re not really using it for presentation, we’re shooting managers, bikes leaving the pits, and lots of beautiful things.” 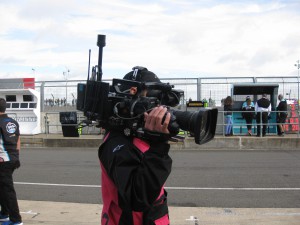 However, he can work with one second delay, for the moment, and given how little time Vislink had to get the system ready for Silverstone, he was amazed at how well they’ve done. “Two weeks ago they had no camera control, they had no iris control. They’ve been adding all these refinements at these late stages, and they’ve got it all working here today,” with full data control of the two Sony F55 cameras. “We were also delighted with the performance of the Sony F55 camera that we used together with our latest Focalpoint Camera Control System, which truly takes remote camera racking to a new dimension,” added Raj Kotecha, Strategic Accounts Manager, Vislink.

The F55s output in four quadrants, “and we needed a way to get the four quadrants back to the truck, and you can’t do it with four radio links because of the timing, etc.” However, the UltraCoder “can take the four videos and compress them into a radio camera slot but still keep the quality,” added Dan McDonnell, Managing Director, Timeline TV.

“H.265 is twice as good at compressing as H.264, so we go into the H.265 encoder, come out of that as ASI, and put the ASI stream into a normal radio camera transmitter, transmit that ASI stream back to our truck, convert it back into 4K, and output it to the mixer,” he explained.

“The challenge around that has been the latency. When I went to see it about three months ago, it was five seconds, and they’ve managed to get it down to a second now, which is a usable camera. An HD latency is two frames, so it’s still a lot longer than an HD radio camera, but it does look fantastic… and I think we will now roll out 4K radio cameras on to our normal coverage of sport.”

Vislink is currently working on the sub-frame latency, with a target of 40 milliseconds (just over one frame), which Jackson hopes to achieve within four months. It involves work with both the encoder and decoder, and part of the difficulty has been the availability of decoders to even start testing its encoder, which is why it has worked with an ASIC integrated circuit manufacturer to develop its own HEVC decoder products. “It’s all down to software now,” he added.

The company will release the satcom versions for broadcast contribution at IBC, and currently has a parallel development team working on a fully integrated wireless camera system, “which we expect to see well before the end of this year.” It is also working with Dorna to develop an on-board wireless system, and he hopes they will be able to test prototypes on motorbikes later this year. Initially this will use HD cameras and take advantage of the quad feed for multiple encoding, “with a view to testing its robustness, and then working either in house, or with another manufacturer, for a 4K on-board camera.”

As the H.265 system has four separate encoders, with a low power budget, in a very small package (“our actual encoding device is credit card size”), it can transmit four camera feeds from a bike, live, simultaneously, with very limited bandwidth.

The MotoGP was also the first time BT Sport has achieved contribution over satellite for an Ultra HD broadcast. BT’s Media and Broadcast division developed a hybrid system using an additional vehicle with the UHD encoder set, using quadrant-based H.264 (running at about 80Mbps) encapsulated in one wrapper “using some clever time stamping”, encoded into IP and sent as an ASI stream via an adjacent uplink truck to the satellite, explained Beale.

They chose H.264 because there was no proven H.265 contribution system (encoder/decoder) available, as there were no professional decoders. “People are rapidly developing encoders for HEVC, but they are all domestic receivers,” he added.

“Manufacturers couldn’t give the assurances around service guarantees, uptime and reliability.” He expects that it might take a year to 18 months before they can use H.265 for contribution, but it will take away problems with timing, particularly making sure the quadrants stay in synch.

However, BT Sport has done eight tests and five events using the quadrant system and it has proved reliable. “We’ve worked closely with people like Axon, to develop cards [its UHD Toolkit card] which will pass four paths at the same time and manage that timing relationship between the quadrants better, so will line synch together rather than being agnostic to each other.”