The Northern Hemisphere’s premier rugby tournament, the RBS 6 Nations, has kicked off with victories for England in Cardiff, France in Paris and Ireland in Rome. The Host Broadcaster operation for Italy v Ireland was a joint effort between Observe (part of the Dublin-based Screen Scene Group recently acquired by NEP) and Sunset+Vine. SVG Europe was at the Stadio Olimpico di Roma to learn the background to this RBS 6 Nations partnership and observe how they brought Saturday’s Italy v Ireland Match Day to broadcasters around the world. 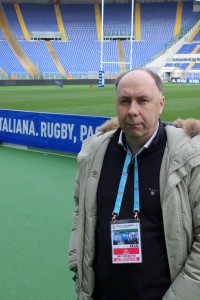 “Six Nations Rugby Ltd, in the last TV rights deal, decided they were going to produce some of the games themselves. This would give them an opportunity to work with new or different broadcasters in the future,” said Alan Burns, co-founder and director of the Screen Scene Group and Observe OB crew technical director in Rome. “Italian broadcaster DMAX didn’t have a huge history of sports coverage in Italy, but they really wanted to do it. DMAX is an Italian free-to-air channel, owned by Discovery, that targets mainly male audiences, and they’re starting to get into sports.

“Discovery was very keen to do the deal,” said Burns, “but didn’t have a lot of sports production experience. Six Nations Rugby Ltd decided to go ahead and they asked me to come and produce the game – as Observe. Last year was season one, and the deal is for four seasons, ten games here at Stadio Olimpico (two home games one year and three the next).

“Six Nations Rugby Ltd wanted to increase the quality of the coverage coming out of Italy so that it was on a par with what the other broadcasters were producing out of the British Isles and France. Production is not my speciality, so I spoke with [Sunset+Vine chairman] Jeff Foulser and we brought in Cerith Williiams from their Welsh office – and that’s really where it kicked off. It’s a Six Nations Ltd production; Sunset+Vine is the production company and Observe [with its UK operation OBS TV] provides the technical facilities.”

“The initial approach was made to Observe, the faciiities company,” confirmed Sunset+Vine match director Cerith Williams. “We had worked on other projects with Observe, and Alan approached S+V to do the production element of the operation. And I was lucky enough to get involved early on and it fell to me to move it forward – and I’m very pleased because rugby is a passion and mostly what I do back in Wales for Sunset+Vine Cymru. We do most of the coverage for Welsh language broadcaster S4C. 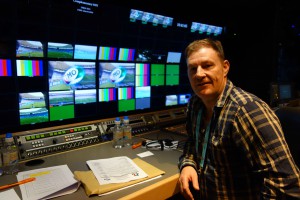 “I think the Six Nations people have seen what other sporting bodies have done, cricket in particular,” said Williams. “The ICC Champions Trophy and Cricket World Cup are their property, their asset and they own it. It’s not an unwise thing to do. We’re very pleased to be involved. It adds to our rugby coverage. In Wales we got involved in rugby almost ten years ago. More recently, we got involved with ESPN to provide coverage of the English Rugby Premiership. And now, Sunset+Vine does all of BT Sport’s rugby including European Champions Cup and Challenge Cup. Rugby, now, is becoming a big part of Sunset+Vine’s core business,” he said.

“Here in Rome we’re creating a world feed with 20 cameras,” said Burns, “and for the first time this year on Six Nations games we’re using a mobile camera on the referee. That’s provided for us by BSI, who have also done it for us on BT Sport coverage of Champions Cup rugby.

“We use Broadcast RF for the radio cameras; Ben Hawker is here on the Broadcast RF side. We have three wireless cams on the pitch and a beauty shot – weather permitting – on the gold statue up on the hill above the ground, with the stadium in the foreground and Rome in the background. It looks fantastic.”

Broadcast RF on-site engineer Ben Hawker added, “We’ve four cameras here: three roving RF cameras inside the ground and a beauty RF camera up on the hill. It was difficult initially [to get the beauty camera on the hill in place] when you weren’t sure who you were dealing with,” said Hawker. “Now we know what cabling we need up there and which way we’re facing. This year the guys can just get up there and do it, and if they’ve any problems they can come to me.

“We’re fairly self-contained here,” said Hawker. “We’ve a great relationship with Observe and with Alan. He lets me get on with it, and when I’m ready I say ‘there’s your cameras’. We take the hassle away to deliver seamless pictures without the additional worry for the OB.” 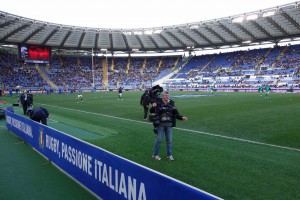 “We’re not allowed to use Spidercam in this stadium” said Burns. “A Spidercam got caught on a pole a few years ago (well before our time!) and they had to get a cherry picker out to untangle it. That was the end of that. Our camera set-up would be comparable, or maybe a little bit more, to any other Six Nations production.

“We have two super slo mos and one high speed radio camera here,” he said. “The high speed 400 to 500 frames per second, on a radio link back to the OB. This is not a live camera, but we’re getting those extra handheld shots at high speed. That’s a Sony camera, with a radio link from Broadcast RF to the EVS. It’s just for analysis.”

“One interesting thing about cameras,” added Cerith Williams. “I’d not worked this stadium until last year. Where I have my main camera gantry (Cameras 1, 2 and 3) is the furthest away from the touchline that I’ve ever seen in any stadium. It’s a good 100 metres. So we have to have very very powerful lenses on all of those cameras.

“Hopefully, viewing at home, you wouldn’t know the cameras were that far away! Other than that it’s a great stadium to work with, plenty of atmosphere, full to the rafters with plenty of colour.”

“This stadium is municipal and multi-purpose,” said Burns. “It’s not bespoke. There’s no cabling infrastructure – and anyway a cable rig for rugby is different than a cable rig for soccer. So we’re very much on the ground, with handheld cameras, touchline ground cameras, TMO cameras in the corners – you don’t have any of that with a football match.”

Because it’s a tight stadium for broadcasting major sporting events, the OB compound configuration at Stadio Olimpico is rather unusual. “There are three layers of an OB compound, going up the hill above the stadium,” said Burns. “The ground layer is the production vehicles; the next layer is the uplink compound; and the very top layer is where the generator and support vehicles go.” 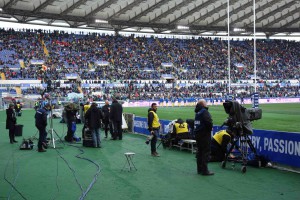 “We’re the Host with OB 1 and our support vehicle; DMAX is next to us; and the other people we have on site are BBC Sport with Telegenic. They do studio analysis and pitch-side pres with BBC staff. They’ve four or five cameras and they take our feeds. They have their own personality camera so that when there are lulls in play they can choose one of their own people rather than what’s coming off the world feed. DMAX do something similar: they take our feed and do their own commentary, analysis and pieces they’ve shot and so on. And then there’s RTE [as Main Visiting Broadcaster] who have a small set up here with an interview camera and they’re doing news pieces with that for RTE Sport and RTE News. We do the commentary team set-up for them.

“Our truck has eight EVS XT3s on board,” said Burns. “This truck has a massive Evertz EQX multi-embedder, Evertz routers, RTS Telex talkback matrix, Sony vision mixer and Sony cameras. We’ve always been Evertz; Simon Reed has been a good supplier to us for 12 years. All our trucks are Evertz.

“In audio we have a Studer console. We’ve just put Calrec Artemis into our other trucks. We’re actually moving to the Artemis, from the Studer,” said Burns. “We had Calrec before, then we went to Studer – and now we’re going back to Calrec. When we bought this desk, Studer was a little bit ahead. But with the Artemis now, Calrec has gone ahead. The Artemis is excellent, excellent,” he said.

“This year, as a separate project, the Six Nations has now got a new graphics look,” said Burns. “We did a test run here and in Ireland last year. Now there’s one RBS 6 Nations graphics feel across all 15 games this year.

“Six Nations Rugby contracted Alston Elliott to produce the graphics, as part of this look. The look was created by Screen Scene and then Alston Elliott took the design and prepared it to work on air. 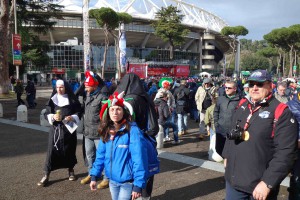 “There are Alston Elliott machines in the Observe truck and in the BBC truck. They can generate different version of the graphics: English, French, Italian and Welsh. They’re now very much part of the RBS 6 Nations look and feel. On the ground, it’s a combination of their staff and my staff. So whether you’re watching on BBC, RTE, France TV or DMAX, it all looks the same,” said Burns. “Then for the world feed, Pitch International distributes it to all the other territories – South Africa, New Zealand, Australia, Argentina.

“It’s been a two-year project — a look across the whole competition, whether the broadcasters are commercial or non-commercial,” he said. “It’s all centrally pooled with Alston Elliott; everybody has the same data and we’re all running off the same graphics engine.”