“For the first time, this year, we’re working with the 6 Nations and all the other broadcasters on an homogenous look for all the graphics,” explained Paul Davies, BBC Sport’s executive producer and match director for England v Italy coverage from Twickenham. “Previously, all the broadcasters have run their own style. They have tended to take what’s on offer from the host broadcaster, in terms of the match graphics, but that meant that around the world you were getting three, maybe four, different styles depending on who was the host broadcaster that week.”

The BBC, like the 6 Nations, has wanted all 15 matches to have the same look, at least from a host perspective. “Domestically, people are still doing their own style to a degree. We’ve skinned our domestic graphics in the colours of the world feed graphics, silver and blue.” He feels it is good for the viewer, and for the 6 Nations, as it gives it a recognisable look “without taking away from the uniqueness of each venue”.

Following the 6 Nations initiative to have a common look, the graphics package was designed by the graphics department at Screen Scene in Dublin and Alston Elliot were then hired by the 6 Nations to do the on-air delivery across all 15 games in multiple languages.

There have been occasions during the first six matches where the large trophy logo on the bug used for kick-offs and scores has obscured some of the action, but the 6 Nations were keen on getting its new trophy in the graphics, and Davies feels it is just a matter of being aware of this and allowing for it in, perhaps, looser framing of those shots. 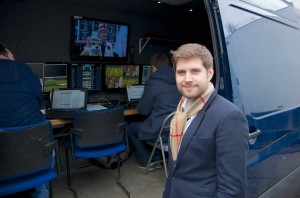 James Smith with the Alston Elliot van, which housed the match and presentation graphics

Alston Elliot is the main graphics provider for the 6 Nations, and had two Vizrt systems at Twickenham, one for the match graphics and one for the BBC presentation. The BBC also used the Viz Arena system (supplied by another company), for on-pitch graphics. “For the first time ever, the match graphics are generic, whether you are watching the game in France, in Wales, it is all the same style,” said James Smith, project manager for rugby, Alston Elliot (Aegraphics).

AE is also working with Opta to provide match data, which has moved on a long way in the last few years. AE has a “fruit machine” data table, using data logged in Leeds by Opta, which is fed to the ground via ADSL lines, “and we can turn it into graphics in three seconds. It’s a few button presses. It’s all automated. As soon as the guys log it there, we’ve got it available to put on air,” said Smith.

There are hundreds of different options to what data they can display, such as how many carries a player has done, compared to another player, or alongside further statistics. “In previous years it has only been the BBC-controlled games that have had this kind of service, now all the broadcasters have it,” he added. “They’re getting this generic brand that has the same amount of information everywhere.”

The international feed is now in two languages: English and French. For a match in Paris, France TV would call up graphics in French, and those would be instantly replicated in English on the world feed. It has also been produced for Italy previously, but not this year.

“It is very clever, and something we are doing for the World Cup as well,” at least in French, with Japanese and further languages a possibility. For the Rugby World Cup there will be a BT line back to the IMG (the international broadcast centre), which will provide the alternative language versions — each from its own dedicated Vizrt system.

For the 6 Nations, the French are only taking the French graphics for their own games (so in the last round of matches, the simultaneous graphics were only done in Dublin for Ireland v France — where there were six machines — one for the match graphics in English, one for French, plus presentation graphics for RTE, France TV and the BBC, as well as a spare machine).

“That’s a big operation, but the 6 Nations is as big as it gets in the Northern Hemisphere, the pinnacle of international competition,” said Smith.

On March 14, for England-Scotland, Alston Elliot hopes to test Ncam Technologies’ augmented reality graphics, again using Vizrt systems, which it used with Sky on the Autumn Internationals. Ncam can be used on a hand-held camera or on a Stanton Jimmy Jib, and is something the BBC are interested in adding to its coverage.