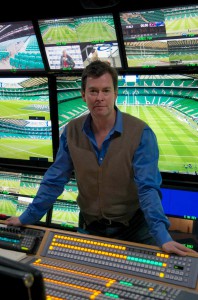 In command: Paul Davies looked after the international feed while working closely with the BBC’s presentation director

“By its very nature, The RBS 6 Nations is always a massive annual event for the BBC, involving complex host and domestic operations across six European cities, requiring detailed logistical planning and execution. With multiple primary rights holders, it’s not uncommon to have four or five different broadcasters at any one match,” said Paul Davies, BBC Sport executive producer and match director for last Saturday’s 6 Nations’ match between England and Italy. At Twickenham the new Italian broadcaster D-Max had its own cameras and presented from pitch side, alongside RTE and FR2.

“We work very closely with the other international broadcasters to ensure that any of their add-on unilateral cameras are carefully positioned both to service their specific requirements but also to make certain that they do not compromise any of our 23 host match cameras; this would work in reverse if we were in Paris or Rome,” he added.

“There’s a lot of planning that goes into the whole operation. We come together as a group as early as October when all the rights holders [the BBC has exclusive UK live broadcast rights until 2017] go to Dublin to meet with the 6 Nations committee,” to review the previous year and discuss the upcoming Championship.

Rugby is one of the more complex sports to cover, but technology, from high-speed cameras to Ref Cam, can help to make it more understandable.

All the broadcasters have fully incorporated Ref Cam into the 6 Nations this year. “It’s always a tricky camera to cut into live play, because you’re always down to the vagaries of what the referee is doing, but it can be very effective when you have set-plays or the ref is talking to the players. It really gets the viewer into the heart of the action.”

If used judiciously, Davies thinks it can be effective, “but you don’t want to disturb the viewer by cutting to a shaky shot, and suddenly the players are out of frame. Used in the right way, and particularly as a replay camera, it often gives us some very good views, particularly on TMO decisions, because the ref is right in there, and sometimes just to show the ref’s perspective. Sometimes the commentators will say: ‘The ref was right there, surely he must have seen that,’ but when you see it from the Ref Cam you’ll see that there was a player in the way or their view was obscured by someone’s arm. So, I think it can reveal quite a lot.”

The position of the Ref Cam on the chest isn’t ideal for TV, and some sports, such as Rugby League, have experimented with a head-mounted camera, but where it has been trialled with Rugby Union, there have been safety concerns for the referee — “if they were to fall over and bang their heads,” which is why World Rugby (formerly the IRB), is keen that it is left on the chest. “It’s really a case of knowing the behaviour of each referee as they have different methods and styles of movement and posture. The camera therefore needs to be angled to the optimum angle dependent on those factors, ideally we would have the ability for remote control but that would be a real challenge, though not impossible,” said Davies. 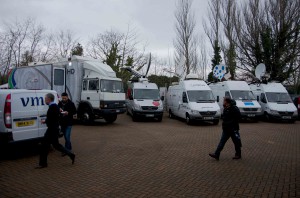 Some of the additional vans in the OB park at Twickenham, Saturday 14 February

For general coverage, “we have pretty much all the cameras that we could possibly want.” The BBC did experiment with Corner Flag Cams during the Autumn Internationals, although it didn’t broadcast the pictures. He believes they need to be RF cameras, because so many pitches are artificial, or the off field areas (as at Twickenham, which has a hybrid grass playing surface) are artificial, “and the groundsmen don’t like us drilling great big trenches into their grass to lay the cables.” It looks likely that ITV will use them on the Rugby World Cup, but getting them installed for the 6 Nations would have been a challenge.

Besides, “you need to look at the value you are getting from all the kit you’re putting in. Yes, if you have got a player sliding towards the corner cam, it could give you that definitive replay shot, but realistically you’re never going to cut it in live. It might give you one shot in a match, max, so you have to weigh up the value of investing in something like that versus what you get out of it.”

The BBC used to use cameras on the goal posts, but it used them “maybe two or three times a match, and they cost £4,000 a game, so I think you have to think about the cost per shot, and work out where you want to invest your money.”

However, high framerate cameras “have brought a revelation to all sports coverage,” added Davies, who is also responsible for Wimbledon, Open Golf, Sports Personality of the Year, and the Boat Race. “In all sports, but particularly rugby, it is revealing so many things about the technicalities of the game, in particular the power, strength and skill as well as just how tough the sport is.” It also looks good. “For such a contact sport, to get such beauty out of it, particularly using speed ramped shots, where the collision or some great piece of skill can be highlighted, the hi-mo cameras have been a fabulous addition.”

The Television Match Official, who sits in the OB truck, is a developing part of the game, going beyond just the try.

Sometimes you see the TMO in vision, but Davies feels this puts extra pressure on them, and believes that hearing them discuss what they are seeing with the referee is the crucial thing. The IRB has had doubts about this (feeling that it might put pressure on what perhaps should be a private conversation), and, as a trial, the TMO wasn’t heard during the Autumn Internationals, but is now allowing the TMO to be heard again for the 6 Nations.

The referee’s microphone is also very important in rugby, according to Andy James, senior sound supervisor, BBC Sport. “Not only do you hear what he says but it gets the close up effects of the scrums, the rucks and the mauls, and the kick of the ball. To get the effects from the middle of the pitch, which otherwise you wouldn’t get.”

The referee wears one microphone for the rugby talkback, and another for the broadcast, but they both back up each other.

Besides the TMO, there is also a citing officer, who comes in to the truck after the match to view clips to see if something illegal happened. “We’ll dub off the incident from as many angles as he sees fit, so that he can review them,” added Jackson.

The TMO will soon have more eyes to help him. Hawk-Eye was at Twickenham doing a not-for-broadcast trial of alternative TMO set ups, which will be used for some Pro 12 matches, where the TMO will be able to view many different angles at once, both from the broadcast and the Hawk-Eye cameras. “It will be much more interactive for the TMO,” said Davies. “At the moment they are very much relying on the director. We have good communication with them, but sometimes we’re are not absolutely certain what they are looking for, and sometimes they’re not sure until they see it.”

The analysis of rugby has moved on “incredibly well,” with the use of such devices as Piero (which had its own truck at Twickenham) for highlighting a move from multiple angles, with virtual graphics, but Davies feels that the next move for broadcasting rugby should be to take it back, in some ways, to basics, which it is doing for this series “using a telestrator in its most purest and basic form.”

Often, particularly in the breakdown (ruck and maul), a commentator will want to highlight a player’s action, but it is difficult for the viewer to understand. “It is all about identifying in a clear way what they are talking about, and I think the basic use of a telestrator, whether just with an arrow or a circle, says ‘this is what I’m talking about and visually that’s where it is’, and straight away the viewer says ‘I get what you’re talking about.’ We get some frustrated viewers, particularly for the 6 Nations, who might not watch rugby week-in-week-out.” Therefore, the presentation can benefit from being less technical, and should aim to explain the rules of a complex game, which is why it has brought the telestrator back into the commentary box.

For many millions of people, the only rugby they watch is during the series (the BBC had 9m viewers for the Wales-England evening kick off), and they have discussed with the commentators and analysts how they can “enlighten the casual viewer, without dumbing down the coverage.”

One of the things that Sir Clive Woodward talked about was that coaches often play their most effective team in the second half, to win the game against a tiring opposition, rather than starting with the best team. With so many changes in the second half, they talked about how best to make this clear for the viewer. They now use a graphic to visually demonstrate who has gone off and come on, and in what position they are now playing in (because some of the changes are purely positional). “It is a very basic graphic, but it is totally revealing,” said Davies.

“You can get really complex and bogged down with your analytical stuff, but sometimes it is just about a basic bit of telestration or a basic graphic to reveal what is happening.”