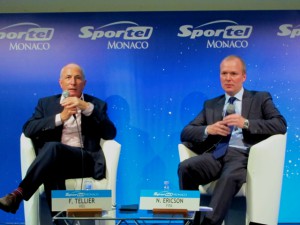 World Cup rights-holders next summer will have more ways than ever to reach football fans as FIFA TV and HBS will offer up not only a full slate of HD production but also 4K coverage of the Final (and possibly other matches), as well as a multimedia experience that will deliver a wealth of video to handheld devices via apps and Web sites.

“A customised player can be paused without delay and key plays will be marked with icons in the [player timeline,” said Niclas Ericson, FIFA TV, director, during a press event at Sportel in Monte-Carlo. “And fans will be able to watch not just the match but also a tactical feed, two player feeds, and two teams feeds.”

Also available will be video on demand content, including interviews, city profiles, feature stories and match profiles. “The white label service is a huge undertaking and one of the reasons we will have a team of 3,000 to deliver an operation like that.”

Those 3,000 personnel will rely heavily on workflows that HBS, the company at the centre of the World Cup efforts, has been refining since 2002, when it first won the bid to serve as host broadcaster for the World Cup.

“We don’t start from scratch every time and there is a lot of continuity in concepts,” said HBS CEO Francis Tellier.

There will be some new production features this year. Each match will feature 34 cameras, including eight super-slow motion cameras as well as two ultra-motion cameras, new POV cameras (like tunnel cameras), a CableCam, and cameras on the reverse side of the field located at the six-metre mark.

“The reverse-side cameras are useful because in principle we should not miss any game action,” added Tellier.

The expanded use of ultra-motion cameras is no surprise given that they are often responsible for some of the stunning slow-motion replays that the team of eight world-class directors and broadcasters make such good use of within a broadcast and pre- and post-game coverage. In fact, the clips are such a hit that next year’s World Cup will have a second compilation channel, with one dedicated to replays and action and the second to emotions.

Broadcasters and fans can also expect more content to be produced the day before each match.

“More and more happens on that day and we have to offer more services to broadcasters, like live coverage of training and press conferences,” added Tellier.

Helping get that content out to broadcasters will be an expanded FIFA Max server that can be accessed both onsite at the IBC and offsite.

“We have added more and more flexibility so that everything is on the server as there is more demand from access outside of the IBC.

Another highlight of the presentation was the naming of the eight football directors that each will lead a “dream team” production crew. The directors are Jean-Jacques Amsellem, Francois Lanaud, Knut Fleischmann, Wolfgang Straub, Thomas Sohns, Jamie Oakford, John Watts and Grant Philips.

There is still plenty of preparation to be done for the World Cup. Ericson said that while a number of stadiums still have some work to do, FIFA TV is “relaxed about it” and expects everything to be fine by next year. And then there is work to be done on social media.

“We’re working actively to get agreements with key social networking sites like Facebook, Google Plus, and You Tube to make sure we can have social media on our sites in an integrated way,” he added.