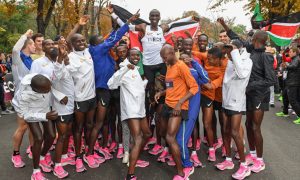 Eliud Kipchoge celebrates breaking the two hour barrier for a marathon distance with supporters and his team on the Hauptallee, at the At the INEOS 1:59 Challenge, Vienna, Austria on 12 October 2019

Global host broadcaster Sunset+Vine is in Monaco at Sportel to showcase the most innovative and technically challenging projects it has completed over the past year, including the recent INEOS challenge completed by Eliud Kipchoge.

The company is also talking to federations about enabling them to maintain control of their content output and productions.

On Sportel, Jeff Foulser, chairman at Sunset+Vine, like many present here in Monaco, says the event is evolving over time. More federations are producing their own content, which means companies like Sunset+Vine have a role to play in showing those organisations how they can achieve that.

Talking to SVG Europe, he commented: “This event has changed over the last five years. We’re talking to federations about content production. Federations producing their own content is happening more over the last two to three years. Clients want more control over their productions, rather than have a network do it for them.

“The ICC are a prime example. The federation can keep control of their production. What the federations have become [more astute] is they know the people worth talking to so they do closed tenders sometimes,” he noted. Sunset+Vine is currently pitching for the Commonwealth Games Birmingham 2022. Said Foulser: “Covering 17 sports all at once is a logistical as well as technical challenge.”

He added: “We’ve got a lot of mouths to feed [at Sunset+Vine] and we need big contracts to sustain them.”

On challenges, Foulser said: “Not missing anything is a challenge. It’s important for us to be here as a producers and distributer as well.”

On the INEOS challenge, he noted: “It wasn’t just a technical challenge; it was all about creating the perfect conditions to enable Eliud to do that.” Kipchoge had a ten day window which would be used one day at a time if the necessary conditions were elusive, but this meant Sunset+Vine’s team, as well as all the broadcasters taking the feed, had to be as flexible as possible.

Added Foulser: “It was very challenging but we provided not just the live broadcast but the data feed as well, real second screen stuff to go with the race coverage. It was a challenge but very successful. We’d like to do more of that challenging stuff.”

The company is growing thanks to its successes under testing conditions. Commented Foulser: “Over the last five or six years we’ve become a big business. It wasn’t particularly planned, but if you do a good job you get a reputation and people just pick up the phone to you.”

He concluded: “We’ve done all sort of things I never thought we’d do, like the World Equestrian Games in North Carolina with FEI, the federation. It was a tender process, and we’d never done anything like it before, but we bought people in that did and because of our event experience, we got it.”