Twitter began as a social media platform based around text characters but the launch of Go Live earlier this summer has put video front and center for the company and its users. “This is a great leap and working with the NFL and others drives a dependable experience across sports, news and entertainment,” said Raleigh Blank, Twitter, director, live content, at a Twitter presentation at Sportel. “It is a differentiator with how content can be engaged with throughout the world.” 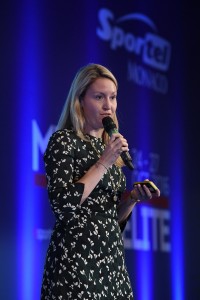 Raleigh Blank, Twitter, director, live content, says the company is proud of what it has accomplished with respect to live video. (Photo by Valerio Pennicino/Getty Images for Sportel Monaco)

The big news recently has been Twitter’s partnership with the NFL, whereby Twitter is streaming 10 NFL Thursday Night Football games this season. Monetization is courtesy of Amplify, Twitter’s system that allows content publishers and creators to monetize content by making it easier for advertisers to reach audiences.

“We are also really proud about being on connected devices like Apple TV where half the screen follows the Twitter conversations while the other side has the stream and ads,” said Blank.

Alex Trickett, Twitter UK, head of sport and global sports chair, said that video increasingly has a place on Twitter and is connecting fans and athletes in new ways.

“Live is in the moment and if you care about sport you are following it on Twitter,” he said. For example, when Leicester City won the English Premier League last year a member of the team was broadcasting live through Twitter when the title was clinched. That video drove 187,000 tweets per minute and accounted for an 86% increase in normal Twitter activity in the UK.

“But sometimes it is about planned content like what BBC did during the Rio Olympics,” he added. “With SnappyTV you can take a live stream, clip it in realtime, and then publish it to Twitter. Capture it, bottle it, and share it and people will lap it up because it is so time sensitive.” 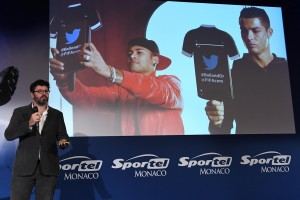 Another example of the power of tweets was when Wayne Rooney scored his fiftieth goal for England, setting the all-time record. As part of the celebration a 20×20-metre flag was emblazoned with hundreds of tweets from fans and then unfurled at Wembley Stadium.

“Rooney then interacted with three or four of the fans who tweeted, closing the loop and making it a joined-up experience,” added Trickett.

EPL club Tottenham Hotspur also engaged with fans via twitter as a number of player signings occurred and one of the fans, Benny V, wrote in and asked when his contract would be signed. The team took his photo from his twitter account and photoshopped into a photo of one of the real signings to grant Benny’s wish.

“It shows that the club cares, is listening, and that the fans are part of the organisation,” said Trickett. “How you tell your story on your twitter channel is important.”

And then there is the ability of a tweet to become more than just a viral social media phenomenon and actually inspire real-world action. When twitter user and Northern Ireland football fan “Kenno” posted a video where he sings a song he wrote called “Will Griggs on Fire” it quickly spread like fire and eventually became a song that was sung by Northern Ireland fans at the team’s Euro matches.

Aneesh Madani, Twitter India, sports partnerships, added that twitter can also play a role within a TV broadcast. Twitter allowed viewers of the ICC World Twenty20 cricket championship in India to tweet in questions for the Indian team captain for each of the 35 matches.

“Getting the question asked makes the dream of one fan come true and they were able to do that 35 times and create a story for those fans that they will hold for a lifetime and share with friends and family,” said Madani. “It’s the power of a live communal sports experience coupled with the distributed nature of Twitter.”

And even inanimate objects can get into the Twitter game if a marketing team is savvy enough. The Olympic Torch, for example, was the first one to tweet about its lighting and the beginning of its long journey from Greece to Rio for the Summer Olympics.

“You can use Twitter with a lot of personality and flair and get fans closer,” he said. “And overall there 75 billion Twitter impressions for the Olympics that were personal and authentic.”