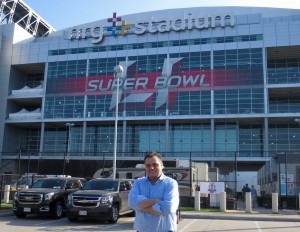 Mike Davies: “I have never been so proud of a whole group of professionals that have worked together on an amazing project and managed to keep it sane and methodical”

The excitement is building among Fox Sports team members as they finalise production plans and look to roll out a few technical innovations that will raise the Super Bowl production bar, something that happens every year for an event that rotates among Fox, CBS, and NBC. At the helm this year, Fox Sports plans innovations that could become a mainstay for future Super Bowl broadcasts.

“It’s a showcase, a stage,” says Mike Davies, SVP, technical and field operations, Fox Sports, “and, the way technology is going, it will always feature some new things.”

The technical advance that will have the biggest impact on the production is the use of more super-slo-mo systems and high-resolution cameras than have ever been used at a Super Bowl. Sony HDC-4300 and P43 cameras will be operating in 4K mode in key locations — goal line, end line, sidelines — so that the production team can zoom in for high-resolution close-ups. And two Sony HDC-4800 cameras are on hand for super-slo-mo coverage.

“We even have a super-slo-mo camera to capture fan reactions,” says Davies. “Super-slo-mo is great for the game coverage but also for capturing the emotions, like a grimace or a wink.”

Fox Sports is also taking pylon cameras to the next level with a simple change: the cameras will be angled at 45 degrees rather than perpendicular to the lines.

“What we like about it is that you can see more of the field. We can potentially do a replay that goes from one camera in the pylon to the next,” says Davies. “And, now that the cameras are HD, it’s shocking how good they are.”

The most eagerly anticipated innovation is Fox’s Be The Player enhancement, which will use technology provided by Intel. Last year, Intel acquired freeD, a technology that had a role in the CBS Sports broadcast of Super Bowl 50. The freeD system last year comprised 36 5K cameras installed around the stadium to capture the action from all the angles. Those multiple angles were rendered to create a replay that allowed viewers at home to see a single moment from all angles; a virtual camera would swing around the point of focus. The camera installation gave Fox and Intel a chance to continue to experiment

At NRG Stadium, Fox Sports is taking the technology to a new level, deploying 38 cameras. Each camera will be connected via fibre (more than five miles of fibre in all) to a dedicated server in Intel’s onsite production room, which will house a half dozen Intel staffers and a dedicated Fox Sports producer.

Simultaneous camera data are processed together, composing every point in the stadium into individual volumetric pixels (or ‘voxels’), which are used to build a true three-dimensional reconstruction of the scene. In addition to the individual camera servers, ‘management servers’ provide the computer power to build the replay packages, which display a 3D reconstruction of the play and can be paused, zoomed in or out, and viewed from anywhere on the field.

“Once the Intel team understood that we were somewhat permissive as to how things looked, that got things turning. As it turned out, it not only looks really good but can be turned around pretty quickly,” says Davies. “We benefited from faster processing and other good stuff, but we are really pleased with how the workflow was ironed out.”

8K will be deployed to catch missed action 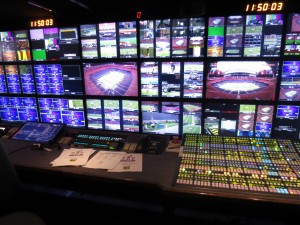 Another first at Super Bowl LI will be the use of an 8K camera from Astro and an Evertz DreamCatcher replay-server system. The 8K camera is located at the 50-yard line on an upper level and will be able to get a shot of the entire field of play (as well as sidelines and the crowd). An operator in the compound will be able to zoom in and extract an HD-quality image from the frame, giving the production team a chance to capture replays that might escape one of the regular camera operators, who are focused on specific assignments.

“We tried it with Astro and Evertz at the World Series, and it worked really well,” says Davies. “So we asked them if it could be available leading up to the Super Bowl for some tests. But there are so few cameras in the world like this, that wasn’t possible. It’s the whole whiz-bang thing of seeing the Super Bowl in 8K.”

This is the fourth Super Bowl that Davies has worked on. Although the game coverage has evolved, the biggest change around the big game is the increase in pregame coverage.

“At Super Bowl XLII in Phoenix [in 2008], we had a single pregame stage and a day’s worth of programming,” he recalls. “Now the Super Bowl programming is tied into weekly cable programming, so it’s like two Super Bowls: we have as many people working in Discovery Green [on programming all week]. This is a fairly recent phenomenon for Super Bowls.”

Game Creek Video’s Encore production unit is making its Super Bowl debut, and Cleatus, which is normally deployed by another network under a different name, will be used for pregame coverage. Also on hand at the stadium is Game Creek’s Chesapeake, a new unit that will spend most of its year working for MASN in the Baltimore/Washington market. At the Super Bowl, it will be used for the red-carpet show.

“Working with Game Creek over the years, we have generated additional support trucks and work in a symbiotic way,” says Davies. “And we have the confidence in the team brought in by Game Creek, whether it’s engineering, management, or the people working on the trucks.”

NEP, meanwhile, is handling Fox production needs at Discovery Green with ND1 on hand for the full week of programming.

Notes Davies, “We are using ND1 as a bit of an ESU, with a lot of the shows being finished in Los Angeles or done fully as a home-run production back in Los Angeles.”

Fox Deportes, Fox Latin America, Fox News, and Sky UK are all on hand as well, ratcheting up their production hours and presence at Discovery Green and the NRG compound.

“NEP has been awesome: the trucks at Discovery Green are being used for something totally different than how they are used for the rest of the year,” says Davies. “And that speaks to the utility of the facility and the engineering teams.”

Among other technical providers is CP Communications, which handled fibre installation and is providing standard wireless field audio plus four RF cameras, including three Steadicams. BSI is providing hand mics; Soundtronics, wireless mics on the red carpet. VER is supplying the routing equipment, the core of the distribution area. And Fletcher is providing multiple robotic cameras.

Cyber security Is new challenge with complex operations
The entire Fox Sports presence across Houston is a massive technical showcase for mature technologies and new workflows that rely increasingly on IT networks for things like file transfers, device control, and signal transport. That is one reason Fox Sports is working closely with the 21st Century Fox Cyber Security Group to ensure that the various entities in the compound are operating in a secure manner.

Part of that process included an audit of both Fox Sports operations as well as those of various vendors.

“[The Cyber Security Group] made some recommendations that we have implemented, but, overall, we were pleased that everything was within acceptable margins,” says Davies. “With complex setups come complex problems, and cyber security is one of them; we have a compound full of hundreds of people. We separated the normal internet traffic onto a network provided by Beagle Networks that is an arm’s length away from the network being used by Fox or on the truck networks.”

When the game ends on Sunday night, odds are that Fox Sports will help move Super Bowl production forward, providing a bit of a template for NBC Sports to follow next February, when Super Bowl LII is held in Minneapolis.

“The networks build on each other’s shoulders,” says Davies. “One of our colleagues at another network wished us luck and told us he felt pride in what we have planned here because we all build on what everyone else has done. We’ll take a page from the NBC and CBS book as they do ours. But there’s always a healthy competition to add new and relevant technology to the Super Bowl.”

Davies says that there is a lot of pride among the Fox Sports production teams and they are committed to putting in a lot of work upfront to make sure they can be prepared for the unexpected.

“We have a really good team of people who manage really good teams,” he says. “I have never been so proud of a whole group of professionals that have worked together on an amazing project and managed to keep it sane and methodical.”