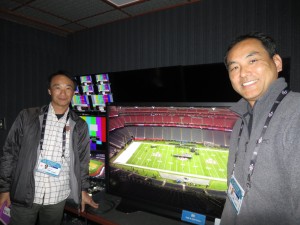 Four years ago, at Super Bowl XLVII in New Orleans, Evertz introduced the first 4K zoom system that launched one of the hottest new sports production trends: extracting HD-resolution closeups out of a 4K image so that viewers at home (and replay officials) will more easily be able to tell if a player’s foot is in bounds, whether a catch is made, and more. And at Sunday’s big game Evertz, along with Astro Design, takes the next leap with the use of an 8K system.

“We can do two 8K pictures in and a 720p picture out that is extracted out via 600% zoom,” says Joe Cirincione, Evertz, vice president of sales who is on site at NRG Stadium.  “An associate director will be tracking the motion and can do live zoom, pan, tilt, and even key frame tracking.”

The workflow begins with an Astro AH-4801-B camera coupled with an 18mm prime lens capturing an image of the entire field of play from the alt 22 camera position at the 50-yard line (prior to the game it was moved to a slash position). That camera is connected to an Astro AT-4803 8K optical transfer unit, an AR-4804 8K optical receiver unit, an AC-4802 camera control unit and an HR-7512 8K uncompressed SSD recorder and player. An Astro SC-8215 converts the 8K signal to 4:2:2 and then passes it on to the Dreamcatcher for editing via 16 3Gbps-SDI links and to the 8K DM-3814 monitor via 16 channels of DVI.

The Dreamcatcher control allows for the user to set it to follow a specific player or be easily moved around the 8K image as needed.

There are plenty of potential applications but the goal is to provide the ultimate backup for a massive production team that often has very specific camera assignments. For example, if a penalty for too many players on the field is called the 8K camera allows for an HD extraction of the quarterback snapping the ball and then moving the extraction frame to the sideline to see if the players did not get off the field in time. It also could be useful for replays of an injury that occurs away from the action and more.

“We can be ready by the third replay,” adds Cirincione. The system works in realtime but the slowdown is simply due to the editorial decision making that needs to take place. The replay can also be delivered to a third-party telestration system and Evertz has plans to eventually add in their own telestration system.

The 8K camera has a 1.7-inch CMOS sensor that captures 33 Megapixel images at 60 frames per second. Resolution is 7680×4320 and output is via 12-channel parallel optical output (SNAP 12). It can handle PL-mount lenses and weighs only two kilograms, excluding the lens.

Kevin Akiyama, Astro Design, CEO, is based in San Jose, CA and says that the company is looking for other applications for the system. “We have been working with NHK for more than 10 years and in 2020 NHK is targeting 8K distribution to homes for the Olympics and that is our goal as well,” he says.

With the move to UHD broadcasting on the near horizon the system could also play a role in 4K productions by allowing the current zoom craze to migrate over to the new format, making high-resolution 4K extraction a part of the UHD production puzzle.