The Philadelphia Eagles are headed to Super Bowl LII. And, although plenty of Birds fans are sure to flock to Minneapolis this week, millions more will watch their team from home.

It’s Philadelphia Eagles Director of Production — and lifelong Birds fan — Eric Long’s job to deliver the sights and sounds of Super Bowl Week to one of the league’s most passionate fanbases. He, along with 12 other members of the Eagles’ content and creative team, are more than up to the task. 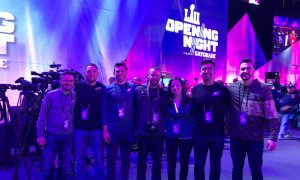 The Philadelphia Eagles’ content-creation and production team onsite in Minneapolis

Before the Eagles could punch their ticket to Super Bowl LII, however, they had to first get through the Minnesota Vikings in the NFC Championship Game. While Long’s team — which is responsible for the in-venue videoboard show — prepared for one of the most important games in stadium history (Lincoln Financial Field last hosted the NFC Championship Game in 2005), it also wanted to be ready for what might come next.

“We knew the place was just going to be rocking,” says Long. “When the fans are coming in already excited and fired up, we’re trying to be that spark that, at the right moment, takes them over the edge and ignites the place. We knew that this was the biggest game that we’ve hosted in many years here, and a lot of planning went into how we could take things a step further in terms of keeping the energy level up.”

Working with its closest technology vendors — including Sony, which brought in an HDC-4800 super-slow-motion camera for the game — the team aimed to capture every moment of the game and its aftermath.

“We were optimistic that we would win, and we were prepared to capture that moment and capitalise on it,” Long recalls. “When the game ends and we’re celebrating and have the trophy presentation on our field, we’re all fans enjoying the moment, but we also had to stay focused and make sure we’re capturing this in the best way possible. The last thing that you want is to miss those shots or for something not to work when you need it most. Fortunately, all of our planning paid off, and we were able to put it all into action.”

Long and his team arrived in Minneapolis on Sunday night and, with Super Bowl LII only a few days away, are currently hard at work churning out content for the team’s website, app, and social-media platforms.

They are also building a Super Bowl-coverage plan from scratch. The last time Philadelphia played in the Super Bowl, Facebook was in its infancy, and neither Twitter nor the iPhone had been invented. The group looked at how recent Super Bowl-bound teams like the Denver Broncos and Seattle Seahawks leveraged technology and social media to deliver the experience to fans at home and how the production team could supplement the linear Super Bowl coverage.

Sports Video Group has a team of editors live on-site in Minneapolis this weekend. You can follow all the action via our SVG Super Bowl LII Sports Tech Blog.