The Super Bowl is one of those rare events where one compound is simply not enough as it is split into a domestic compound for the US rights holder and an international compound.

“The NFL Network would typically have four trucks in our compound, and we don’t have that this year,” said Michael Greenwood, NFL Films, director of engineering services. “And it’s a good thing because the compound is a little challenging because it is uneven.”

The NFL international compound this year includes 16 production units, including NEP’s EN1 A and B unit which is where the world feed is produced (the other trucks support international needs). There are also 23 production trailers and five satellite uplink trucks. 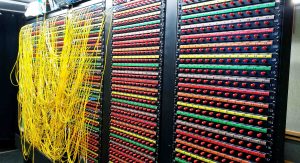 have two routing switchers as the unit now has an Evertz Trinix router with multiviewer that is large enough to meet the demand with room to spare.

“It’s made a big jump this year and NEP did a really great job on it,” he said. “They were involved with our signal distribution before, so they were very familiar with what we were asking for.”

This story first appeared on Sports Video Group US. To read more, go to: https://www.sportsvideo.org/2019/02/02/live-from-super-bowl-liii-nfl-films-embrace-revamped-nep-super-b-for-fiber-needs/