Sky Sports UK is in the first year of a new five-year deal for the Super Bowl and it is expanding on previous coverage with the use of a new combined satellite/production trailer from Sure Shot, a larger studio position, a pitch side position, and more programming in advance of the big game.

“We have been running a lot of NFL Network programming so there is a lot of live network programming taking place all week based around the NFL and what the Super Bowl is all about as we give a boost to the coverage of the NFL,” said Keith Lane, Sky Sports, director of operations. 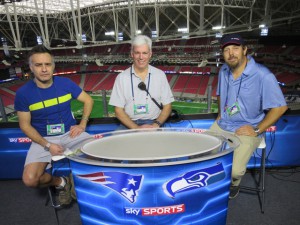 Sky Sports game coverage kicked off Sunday at 10 pm GMT, an hour before the pre-game festivities. For game coverage Sky Sports relied primarily on the NBC dirty feed for the game coverage and the world feed for the halftime show. It also had access to individual camera feeds and three EVS servers so the production team could build up replays for analysis and also cut around NBC promotional material. Adobe editing software was also used for building packages. Outside of the game coverage Sky Sports this year had a pitch side host position. “We want to bring the game and atmosphere to the viewers at home and we thought it would be good to have a pitch side reporter who has an opportunity to grab some people and talk to them,” added Lane.

The biggest technical change this year was the use of Sure Shot’s KMHD, the company’s newest production/uplink truck. It measures 42 feet and has a C-band uplink plus Grass Valley LDX-80 cameras with Canon lenses; a Grass Valley Kayenne K-frame production switcher with four mix effects; two EVS six-channel servers (Sky had a total of three EVS servers); and a Chyron LEX 3.1 Duet graphics system.

Lane says Sure Shot has done a good job outfitting the truck with really good equipment and the C-band link will provide domestic satellite transmission to New York City where a fibre connection from Pac TV was used for primary transmission back to the UK. Encompass provided a backup transmission to the UK and Sky Sports also downlinked the world feed in the UK as an extra layer of redundancy.