The previous FIFA Women’s World Cup was held in 2015, and the four years since then is a lifetime when it comes to the evolving needs of social media content creation and delivery. There are new devices, anticipated trends that fail to materialise, and new trends that pop up. But one thing remains constant: social-media content is one of the best places to showcase personalities and events that happen off the pitch.

“The story of an event like this is the colour around the matches,” says Neil Darroch, senior manager, TV operations, FIFA TV. “The matches are good, but you also really need the stories around the matches. And now we’re beyond the standard interviews.” 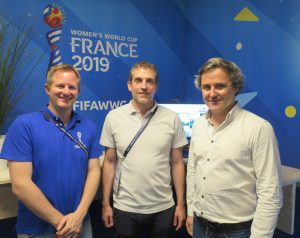 This year’s tournament production features the largest commitment ever to creating content beyond the pitch. Each team had a dedicated video team that captured everything from practices to press conferences to arrivals. Those teams spent plenty of time with the athletes and coaches, and that familiarity produced a new level of relaxed storytelling that generally occurs only after a subject and production team have been working together for years. But today’s athletes, growing up with video cameras in their pockets, are extremely comfortable in front of (and sometimes behind) a camera.

HBS has a team of seven working in the IBC on social-media needs and, as has been the trend for nearly all sports productions in recent years, they are working closely with the rest of the editorial team.

“We’re trying to bring those teams as close together as possible,” says Johannes Franken, head of digital, HBS.

The content that is created has three pillars: short-form videos, 360-degree videos, and infographics.

“Broadcasters can get long-form content via the FIFA MAX server,” notes Franken, “and we now have a social-media interface that is simple and also goes chronologically so that the user can scroll backwards to the earliest items. They can also download items as either 1:1 or 16:9, which enables easier publishing to Instagram or Twitter.”

The content is also more easily personalised to rightsholder needs. Infographics can be downloaded either as a JPEG for quick publishing or as a layered Photoshop image, allowing rightsholders to change branding, photos, or other elements.

The video content also goes beyond highlights with things like quizzes or “5, 10, 15,” where players discuss their involvement with soccer at ages 5, 10, and 15 (newsflash: they were often on kids’ teams for at least two of those three ages). Another popular item was the “Kick Up Challenge” (China took top honors). And then, of course, there are unscripted moments, such as interview bloopers and visits to landmarks around France.

“The behind-the-scenes [looks], what the players have been sharing, and the quizzes have been really interactive,” reports Stefan Wistuba, director of production, HBS,“and you can see the clips being used everywhere.”

Adds Franken, “Some of the content has been very popular, and smaller items without big reach are doing well. And then there are other items that have gotten close to a million views. All in all, it’s been a great product.”

There are also advances that hint at future workflows. SBS Australia has a section on its website that relies on AI and machine learning to tag players and also understand the type of event occurring on the pitch. Users can dive into the application and search for something like all goals scored by the U.S. team. A quick hit of the return button quickly produces a video compilation rendered on the fly, thanks to a database that is automatically compiled in the background.

“How the manually entered data and the automated data come together is an important part of the future,” says Franken. “And what SBS is doing on the frontend is one of those things that is coming together and offers a lot of potential.”

The biggest development at this year’s World Cup has been the ability of rightsholders to access the FIFA MAX server — the massive repository of content ranging from game action to feature packages, interviews, and more — from their home office as well as the IBC.

“We have a new frontend that is customer-facing,” notes Franken, “and we made some significant improvements on the technical and editorial side for users.”

The digital team has also been hard at work developing other important services for rightsholders. One on-going experiment is live-streaming a high-resolution contribution feed on a point-to-point basis. The technical vision involves sending a contribution feed over the backbone of a large cloud service provider and then touching public internet for connectivity to a rightsholder. The contribution vision would be to offer it as a service whereby rightsholders have access to feeds and other elements without the need for satellite delivery.

“We have created a low-latency loop that streams content from here to Frankfurt to Sydney and then back to Frankfurt and back to here, and the roundtrip latency is only four seconds,” says Franken. “That is faster than satellite, and it is also fully encrypted. So we envision it as an alternative path to satellite distribution of things like alternative feeds.”

The new workflow introduces some different challenges compared with a normal mass-distribution platform. The audience is very narrow, and an item may have only a single user, so the normal caching mechanism, in which a first download in a region triggers replication for others in that region, doesn’t apply.

“One feature we have is that, when someone begins watching content, they automatically can see subtitles that aren’t burned in. For a producer, that makes life much easier,” says Franken. “And [the producer] can simply use an edit controller to mark in and out points and then download to a target, [which] could be wherever they want to receive content: Los Angeles, the IBC, or anywhere else.”

There is also additional metadata information that is more easily visible. And, if a press conference, say, is a subclip within a larger clip, such as a three-hour match feed, the rightsholder can also see all the other subclips within that larger clip.

“If they want to see what was going on in another feed at the same timecode combination, they can do that,” adds Franken. “In the past, rightsholders were overwhelmed with the amount of content, and so we put in a lot of effort to understand how we can provide more value with the same content. I’m quite proud of what the team was able to develop around that concept.”

According to Wistuba, feedback from rightsholders has been positive.