Live from The Ashes: Sky Sports, CTV OB bowl over viewers with tech

The Ashes returned to the world stage this past week at Trent Bridge outside of Nottingham and the level of hype and attention is at an all-time high as the England and Australian teams move to London for a test match at Lord’s Cricket Ground and Marylebone Cricket Club. In the UK cricket fans are getting more than their share of coverage as the BskyB has dedicated one of its channels to all things Ashes and cricket. And cricket fans around the globe and especially in Australia are also tuning in to watch a world feed that is produced by Sky Sports and CTV Outside Broadcast and a total of 110 production personnel. 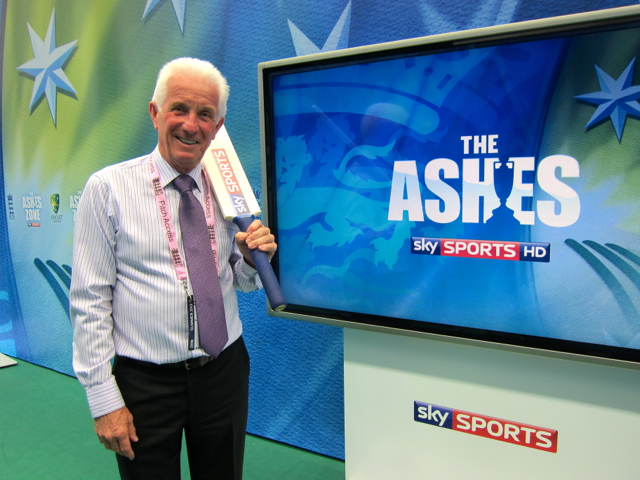 “The world is watching,” says Roger Chambers, Sky Sports production manager for cricket since 1999.  “It’s not like one of our midweek games. This is full on, all over the world, everyone is watching, and, given human nature, everyone wants to make it perfect.”

“Day one is no different than day 100 of the previous season and everyone knows what they’re doing,” he adds. “It’s the teamwork that works out in the end.”

The most unique aspect of a test match production is because the days can be so long, with play for upwards of seven hours a day, the producer is actually located in the commentary booth, not the OB unit. And that is also one of the reasons the broadcasters use handheld microphones with unique wind screens as they prevent noises in a commentary booth that is quite active from making it to air.

The core of the production takes place in CTV’s OB4 HD production unit and relies on roughly 22 Sony cameras with Canon lenses placed strategically around the pitch (as well as on a crane and a tethered blimp) also new this year is that the six Hawk-Eye cameras that capture a large amount of data that is an integral part of reviews and scoring decisions are also now broadcast-quality cameras capturing the action at 340 frames per second. 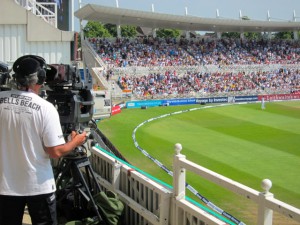 22 Sony cameras with Canon lenses provided the backbone for coverage of the The Ashes in Trent Bridge.

“As technology has improved we have moved along with it and we have always integrated our system with the broadcast cameras to help the believability of the replay as if you can show the camera view with our data laid over it the public can understand what is going on,” says Edward Hawke, Hawk-Eye, cricket operations manager. “And now we have built our own very high frame rate cameras that can record at 340 frames per second.”

Also important are stump cameras from SIS and microphones located on the wicket between the stumps. There are currently two HD

stump cameras in use with one located on each of the middle stumps on either end of the wicket. Capturing 1080i signals, they are transported via cat 5 cable from the stump to the side of the pitch as analogue signals. Once there they are turned into HD-SDI signals for final transport to the OB unit.

“There is also a data signal so we can control camera shutter and color control,” says Andy Aranaz, who maintains the stump cameras. “There is also an audio signal that is sent separately.”

The Ashes return to the UK every four years so there have been plenty of improvements in the core camera, EVS, and audio technologies that are used to cover the action on the pitch. But then there are some new enhancements, including TrackMan, a system that measures the speed of rotation the ball makes as it leaves the bowler’s hand.

Adapted from a version used on the European golf circuit and built using missile technology of the kind found in Hawk-Eye, TrackMan is a small laser camera mounted on a tripod behind the bowler. It detects the ball rotating in flight (even from as far away as the stands) and sends the results to a laptop.

Also new is very portable 72-inch flat-panel touchscreen display that is custom built to be bright enough to operate outside so that Sky presenters can do analysis pitch side. Mounted on a buggy, it has the look of a mobile billboard while travelling from one side of the pitch to the other.

“We can drive it across to the pavilion area before play to do analysis and then park it in the corner,” says Chambers.

And the analysis tools extend well off the pitch as well as the indoor area where players can warm up and practice bowling and batting has been converted into a virtual studio where the Hawk-Eye system and Alston Elliot graphics deliver virtual bowls to Sky analysts so they can discuss strategy and technique. 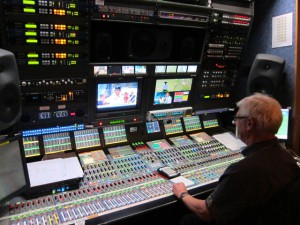 Denis Stevenson riding the desk in CTV OB4 during The Ashes at Trent Bridge.

Audio also plays a much larger role in cricket than it does in other sports as often the sound of the ball hitting an object can mean the difference between a run and an out. The up-close sound is then layered on top of one of two Surround Sound mixes as there is a mix for each side of the wicket.

“There are two omni-directional DPA 4060 mic buried in the ground behind each wicket, a main and a spare,” says Denis Stevenson, Ashes audio mixer. “And on replays we record the stumps audio clean onto the EVS and then I adjust the EQ to play them up and hear the hits.”

There are limits to the audio. “The wickets are where the action so you want to hear that but it’s tricky trying to get that energy but not the [occasionally] abusive language,” he says.

Rob Rogers, CTV Outside Broadcasts, unit manager, says the OB4 works alongside its tender truck, two small nonlinear editing units (one of which is located in the tender unit), and another OB unit that handles the presentation side of Sky’s coverage.

With the Trent Bridge action ending yesterday the OB units are already being set up for the second test that takes place at Lords beginning Thursday. Helping speed those efforts is the fact that both Trent Bridge and Lords are permanently cabled so that the camera cables simply need to run to one of two locations on the pitch. Once there the signals are then sent back directly to the compound. 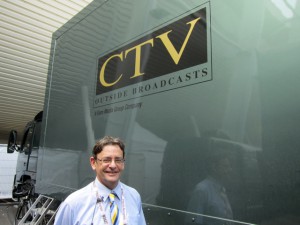 Rob Rogers of CTV OB outside OB4 at Trent Bridge.

Chambers says those sort of connection shortcuts are also important because a cricket pitch has multiple wickets so what is a perfect camera position for one event will not be for the next as following an event a wicket needs some time to heal. Unfortunately two of the remaining four venues, Old Trafford and Riverside Ground, will require camera cabling to be laid the old fashioned way: from camera to compound.

But those efforts are all in a day’s, week’s, and month’s work for a crew that is already in synch as much as the teams from Australia and England.

“There are more facilities and more pressures than a normal cricket match as Ashes is the number one event in the cricket world,” says Rogers. “And Sky demands an even higher standard of product.”

So far those demands have been met and with some more still-to-be-announced broadcast enhancements on the horizon that standard may rise even further.