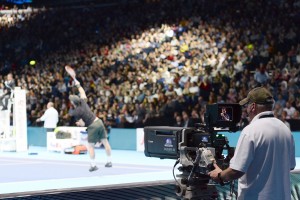 On November 15 ATP Media invited selected press to a comprehensive behind the scenes look at the broadcast production set-up underpinning the Barclays ATP World Tour Finals. The result was an illuminating insight into the innovative production processes at the hugely popular tennis tournament, which has been taking place at The O2 since 2009.

“During the [years we have working on these events] we have really grown a lot in terms of the coverage that we are able to provide,” said Gresset. “We also use a lot of companies who are ‘best of breed’ to provide facilities and personnel. Our approach is not to throw cameras everywhere, but rather to put them in the right places and get the right shots in order to tell the story of the event and give a real sense of the atmosphere.” 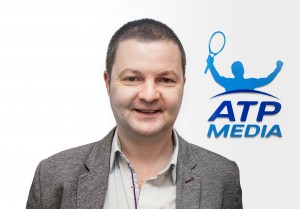 Generally this translates to a specification of 16-18 cameras in the arena, including high-motion, slow-motion, Spidercam and Q-Ball cameras. At The O2 this year the team deployed a grand total of 18 cameras inside the arena, alongside “a few extras” to accommodate the groundbreaking VR trial (which will be the subject of separate coverage on SVG Europe in the coming days).

The cameras – along with other technical facilities and personnel – are provided by long-term broadcast services supplier of choice, Gearhouse Broadcast. Meanwhile, ATP Media provides a core team of senior production people as well as freelancers “who do all the directing and a lot of the producing as well. Many of them have working with us for a great number of years and have really grown with the company,” says Warden.

Underlining the extent to which the camera specification is an evolving entity, Gresset reveals that a BowCam – which is a point-to-point camera system using cables to carry a  camera platform between two mounting points – at a host of 2017 events. “We are going to use it to fly over the top of where the fans are gathering, not least at lunchtime,” he says, describing an addition that is likely to further enhance the atmospheric nature of ATP Media’s coverage.

With the extent and quality of ATP Media’s output continuing to evolve – today it provides exclusive broadcast packages to 75 broadcasters worldwide, encompassing 23 tournaments – it is no surprise to discover that distribution and connectivity have long been near the top of the priority list. Accordingly, Bullock outlined a long-term programme to bring fibre connectivity to 22 of the 23 stadia it visits each year.

“For many years we relied on satellite delivery but that has challenges around the world with atmospheric, weather-related and capacity issues,” he said. A greater diversity among leading players in terms of country of origin – meaning that more and more broadcasters are seeking access to extensive content – also served as a spur to “invest in a permanent fibre network into each stadium”.

One consequence of this is that “key collaborators – such as Globecast for onward distribution” and individual broadcasters like ESPN, Sky and beIN Sports “can come onto the network and sit on the fibre with us. One result is that we are now able to deliver many more matches and feeds concurrently, so for example at Indian Wells next year we will have 14 feeds leaving the site in the first week.” Those additional feeds will include a commentator viewpoint for those overseas broadcasters “who are not on site here and want to commentate instead from their own regional studios. Rather than just have a director cut to and from the action, it means they can provide a view that one would have from the commentary box. It’s a further aspect that helps to build atmosphere.” 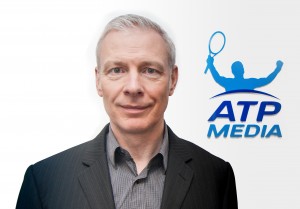 Shane Warden is director of broadcast and technology at ATP Media

In another move intended to enhance broadcasters’ access to ATP Media output, the company continues to evolve its Broadcaster Portal. Devised to streamline the distribution of important documentation regarding the tournaments, the Broadcaster Portal serves as a ‘one stop shop’ for pre-event planning and then serves as the main platform for downloading regularly updated video content during the actual tournaments. It also offers a live world feed blog to keep all broadcasters up-to-date via real-time alerts.

Meanwhile, the ATP Media Digital Archive – which contains footage from previous ATP World Tour Masters 1000 and ATP World Tour Final events – continues to grow. At present it offers some 1,500 hours of material from 2001 onwards, but in the near-future a further 800 hours – spanning the years 1990 to 2000 – will be added.

With the aforementioned VR trial also taking place at The O2, and plans to expand the use of HawkEye-based SMART production significantly in 2017, there is no denying ATP Media’s desire to – as Gresset remarks – “continually push at the boundaries of what is possible. We are always looking for ways to enhance the excitement and atmosphere of the coverage – and that process will carry on into the future.”