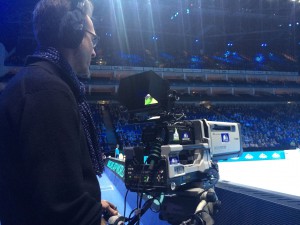 A mere two months since Hitachi launched its new 4K ultra-HDTV camera system at IBC and announced a landmark deal to supply 50 units to Gearhouse Broadcast, Hitachi Kokusai Electric Europe director and general manager Paddy Roache confirm that the manufacturer has already “geared up” production of the SK-UHD4000.

Roache was speaking to SVG Europe in the broadcast compound at the O2, London, where Gearhouse was using four of the cameras to capture the ATP World Tour Finals in 4K.

As expected, the ability of the SK-UHD4000 to use the 2/3-inch B4 mount lenses deployed in conventional HD broadcast cameras has proven to be a major selling point. The use of standard HD lenses with the Hitachi 4K cameras eliminates the need for special conversion adapters, making it possible for broadcasters to use their existing lenses and shoot video in 4K resolution.

For Gearhouse, the investment of 50 SK-UHD4000s represented the company’s first significant foray into 4K technology. “This camera and order represents not only an investment in cutting edge technology, but also sound commercial sense for Gearhouse and our broadcasting partners around the world,” said CEO John Newton at IBC.

Two months on, Roache estimates that “we have sold another 15-17 systems” since IBC and expects to be able to make specific announcements before the end of the year or early on in 2015.

“The ability for the SK-UHD4000 to be deployed as a high-end camera is a definite benefit, so you can be using it all the time – not just 5% of the time,” says Roache.

But there is no doubt that the level of interest has been significantly greater than originally predicted. We were “expecting relatively low volumes”, admits Roache, “but almost immediately we were gearing up manufacturing-wise. It has really struck a chord.”