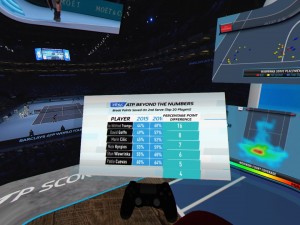 The VR demo at The O2 allowed tennis fans to enrich their experience with a wealth of data.

Visitors to the recent Barclays ATP World Tour Finals in London earlier this month were given the opportunity to experience the excitement of selected matches in a new way thanks to an innovative VR trial. Revolving around interactive pods featuring PlayStation VR, the demo was the result of a partnership between ATP, ATP Media, Infosys (the Global Technology Services Partner of the ATP World Tour) and Sony Professional Solutions Europe.

The demo followed hot on the heels of the October launch of PlayStation VR for PlayStation 4 (PS4), the ATP World Tour Finals demo took place in the Fan Zone at host venue The O2. Content-wise, it featured a combination of real court images, TV match coverage and virtual environments. Utilising both headset tracking technology and physical controller interaction, the user was presented with a reactive and customisable environment. Data insights and visualisations from Infosys and Hawk-Eye provided in-depth context as the matches unfolded. Social media fans were also accommodated with the inclusion of social media streams from MyATP (now on Vixlet).

Speaking to SVG Europe during a site visit to The O2 on 15 November, ATP Media Director of Technology and Broadcast Shane Warden remarked that from “a gaming perspective [one of the great things about] VR is that you can invent worlds that don’t exist. [With this project at The O2] we have used tracking camera technology to create a virtual environment for tennis.”

This environment was built using two Sony PMW-F5 cameras situated courtside. “It is possible to switch between the two cameras, and you fill the area around you with a variety of stats and data. All of the data is sychronised with the Hawk-Eye data, and with InfoSys,” added Warden.

In a statement issued during the tournament, UB Pravin, COO at Infosys, reflected: “Bringing virtual reality to tennis presents an opportunity to amplify human potential, not just in terms of seeing and understanding the game in a new dimension, but also arming players with the insight they need to elevate their performance. At Infosys we are using technology in ways that will reinvent the tennis experience with data, insights and digital experiences. Integrating analytics from the Stats Leaderboards into immersive virtual reality views of the game is one of the many ways in which we are bringing disruptive technologies together and delivering our promise to help everyone in the world of tennis see more and be more.”

Mark Grinyer from Sony Professional Solutions Europe’s sports team added: “It is great to be working with ATP, ATP Media and Infosys to push the envelope of immersive fan experiences. We have worked hard to create a platform which can deliver the exciting vision of our partners.”