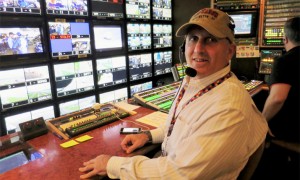 On Sunday afternoon NASCAR’s crown jewel, the Daytona 500 was run, a new champion was named, and Co-ordinating Director Artie Kempner and the Fox Sports team on site could exhale. But the rest is fleeting as next week the team begins a 16-week stretch of NASCAR coverage at Atlanta Motor Speedway. On Saturday Kempner sat down with Ken Kerschbaumer, SVG’s co-executive director, editorial services, to discuss the 2017 season and the big race.

SVG: The NASCAR season is sort of flipped on its head as you start the season with the biggest event of the season. Does that change the way you approach the event?

Kempner: There are a couple of things that play to our benefit. First, it’s a two-week event so last week was where we were getting our reps in. We do The Clash, qualifying, and some practice shows, so we have a chance to shake everything down.

The other thing that is great this year is our crew has not only been together forever but we have been in this compound for three years. We have the engineering down and the track has the fibre and everything where it needs to be. So, from top to bottom this has been the smoothest setup. And now we come into this second week and we know we are ready as we didn’t have any big hiccups last week.

So being that this is the Super Bowl of NASCAR we are ready for it because we had a full week to prepare with real life events.

This event is often a place where new technologies are used. What new tools do you have at your disposal?

We have a couple of Sony HDC-4800 [4K and high-speed] cameras we are using and we hope to get a couple of things out of those.

One of the things we have to be aware of with big events is the budget is higher and you think that if there is some new technology out there that you should use it. But you have got to cover the event at the standard and high level people are expecting.

Also with something new you don’t know if what you are using is a toy or a tool and it’s hard to use the Daytona 500 as a laboratory to find that out. So, we always need to balance that and be careful not to let what could be considered a gimmick or gadget to take over because then you aren’t delivering what the viewer is expecting.

This race is a little less challenging because everything is right in front of you because the drivers run in big packs. If I take camera one and the shot is widened out a little bit I have 30 cars in the shot and pretty much everyone that is being talked about. And I can say ‘point to car 17’ and then the [graphical] pointer points to 17 and we can zoom in. So, with the pointer we can move quickly from just about any car to another car.

But next week we go to Atlanta and the track there is a mile-and-a-half long and the cars get pretty spread out. Sometimes it looks like a conveyer belt where all the cars are six lengths apart. And in that case when Darrell [Waltrip} wants to talk about the number 18 car who is in 17th place we have to find him because he wasn’t in the battle.

You are using the graphical pointer to help find drivers?

Yes. I will tell them that as soon as you hear a car or driver mentioned to point to the car. [Producer] Barry Landis and I push upon the crew to play to win and be more aggressive. We can back you off a lot easier than if you are waiting to be directed and produced the entire time. Stuff is happening quickly in NASCAR so we don’t have the time to do that.

One of the things that is important in these big shows is to allow everyone working here to have ownership as an individual. I’m not going to tell Nelson Hastings, who has probably covered two million laps on camera two, what battles to go to. He is going to find those battles and find the best stuff so I just need to tweak his framing so I have the best stuff for what I need.

And yes, this isn’t brain surgery and there are no life and death issues. But when you sit in that truck there is a degree of impatience and a sense of energy. And part of it is getting people to do what they can do to streamline the process so I don’t have to direct as much as I am selecting. And that is the key to the big shows.

Fox NASCAR Analyst Larry McReynolds has also worked to pre-build some of the 3D-car visualisations so it is much easier for those visualisations to be worked into the show. How will that help the production?

Larry Mack, Zach Fields [Fox Sports SVP, Technology and Integration], and Zach’s team have done such a great job of putting this cut away car together and get all the types of things you could talk about but not show on air. And to the viewer there is also a sense of cool and a wow factor that is important for growing our audience.

Larry has also done such a great job of educating everybody. He has educated everybody on this crew for the past 17 years and I always say he is probably our most valuable unsung player when it comes to the things he brings to this group. He is on top of engineering changes, what’s going on in the garage, and what we can do better. He is the crew chief of our crew and Barry and I and all of us rely on him to get us through things.

And now we have given him this tool, because it’s not a toy. It has been used significantly throughout NASCAR weekends to show what happens to a car when there is side draft and what the airflow does to the car. And when you can visualize that instead of just hearing it talked about that makes it a real great tool in our arsenal.

Given that this is the Super Bowl of racing so what is the energy like for you and the team?

There’s not a problem of enthusiasm and energy for this crew when doing the Daytona 500. And I don’t think there is a lack of enthusiasm for any race because there is always a sense of the unknown and excitement about what is going to happen, even when we are doing Xfinity and the trucks.

But the Daytona 500 is the race that even people who don’t know racing are going to know about. And last year we had a finish with two cars .006 apart and that was the great finish that we hoped for. So, I don’t think there is any issue of getting pumped up for this week.

Also, this is one of two tracks, along with Talladega Superspeedway, where you can’t predict anything. So that is what is so incredible and that makes it exciting.

How do you manage storylines when it is so unpredictable?

When you are doing this race you have to think about it with a little bit of a broader stroke than we will next week in Atlanta when the more hardcore fans are watching. Here you can’t forget about Junior no matter what and you also can’t forget about Danica who is probably the most well-known driver, period. And then there is Jimmie Johnson who is going for an eight championship, something no one else has done.

One thing that has always been the case at Fox Sports since we started in 1994 is that the integrity of the race and the story happening on the track always dictates how you cover things. We don’t write out story lines and say we are going to hit those storylines no matter what. Yes, we are ready with our bucket of storylines and hopefully you don’t have to dip into it. In fact, at the Super Bowl they started dipping into their bucket in the third quarter. And then, suddenly, they had to talk about the biggest comeback and what was happening on the field. The energy comes from what is happening in the game.

So, we don’t have to provide the energy in the Daytona 500. The energy is there for us and our job is to cover it as best as we can.