Live from the FIFA eWorld Cup 2019: More content and more language feeds as the host coverage goes up a notch 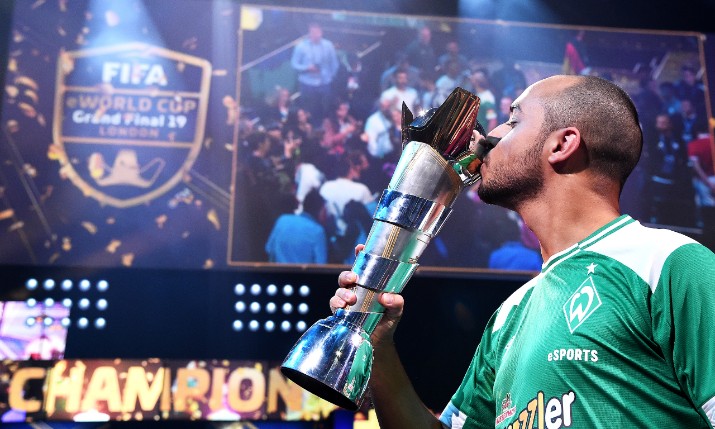 Augmented reality graphics, player microphones, heartbeat monitors and multiple language feeds were all part of an enhanced TV production set-up that was put together for coverage of last weekend’s FIFA eWorld Cup Grand Final in London.

It featured the 32 highest ranked FIFA players from the season competing across a group stage before heading into a knock-out phase that culminated in a two-legged final.

The 2019 tournament had a prize money pool of more than US $500,000 and attracted 21 media rights licensees covering over 75 territories.

“Producing [the coverage] in six languages adds complexity and creates an awful lot of work for the vision mixing kit in the truck. It also requires a lot of [preparation] to ensure that everything works to a tee when we go live.”

The host TV coverage of the event, produced by Sky Sports for FIFA, reflected the scale and importance of the event.

In total, there were more than 20 hours of live production across the three days with the output being shown on both linear and digital channels around the world.

In addition to the match-play stream taken from the video game itself, and the in-vision presentation, analysis and commentary, in order to provide production gloss the host feed also included live augmented reality graphics added to a Jimmy Jib shot, overhead shots captured by a BatCam and heartbeat monitors strapped to the players.

Competitors were mic’d up too, and each had a minicam installed in their playing booth, allowing the coverage to get even closer to the real-world action. 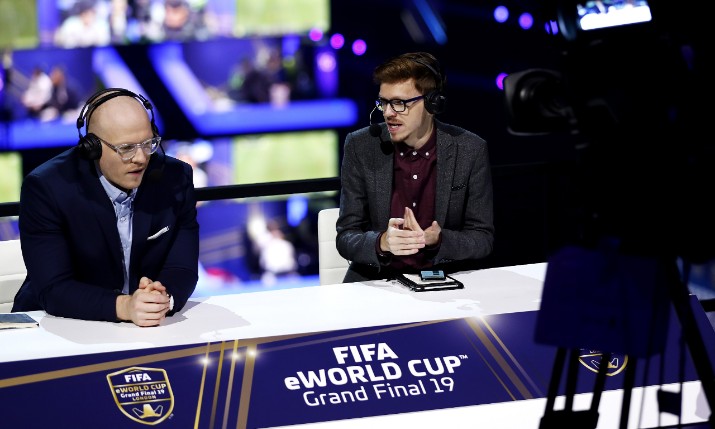 English, German, Spanish, Portuguese, Arabic and Chinese feeds were all produced, each featuring their own in-vision commentary team (see above).

The feeds were made available to the relevant broadcasters with each one also streamed live on FIFA’s digital channels.

Speaking to SVG Europe on day one of the Grand Final, Neil Darroch, senior manager, TV operations at FIFA, said that doing the multiple language streams from a single OB truck was the biggest challenge that the team faced.

“It’s one director managing six world feeds that are cut simultaneously,” he explained.

“It’s a big step up to manage all of that out of one truck. We do it this way to ensure consistency. That’s the biggest challenge and the biggest achievement.” 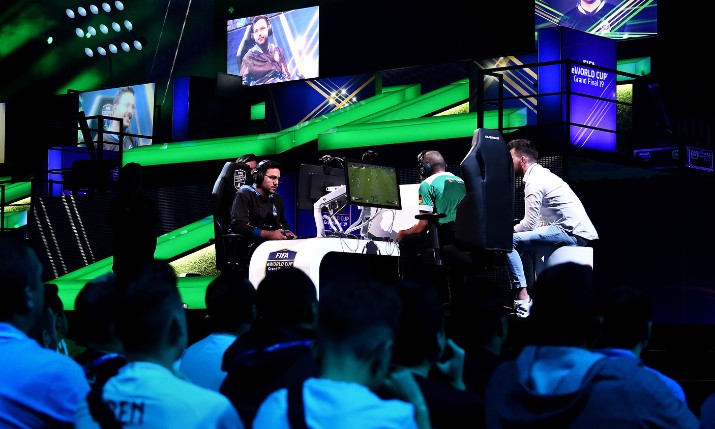 Sky Sports head of production Phil Marshall also pinpointed the multiple language feeds as an accomplishment, noting the importance of the on-screen graphics too.

Having worked on three tournaments with FIFA now, he sees it as being part of the production journey.

“We’ve learnt over that time and assessed from the audiences that graphics, and the ability to look at graphics in a digital world, are important,” he said.

“You can see the development in our graphics package. When people are using smaller screens, they are now able to see everything that is going on in the game and the tournament.

“Producing [the coverage] in six languages adds complexity and creates an awful lot of work for the vision mixing kit in the truck,” he added. “It also requires a lot of [preparation] to ensure that everything works to a tee when we go live.”

CTV Outside Broadcasts provided the OB facilities over the three days.

From an editorial standpoint, while there was plenty of presentation and analysis elements and multiple commentators, the coverage centred on the match-play taken from the video game itself. Especially in the early stages where games were being played simultaneously.

“Based on the feedback from the FIFA eFootball team, we know that the majority of the community want to see the game being played,” asserted Darroch.

“That was in the brief: focus on the gameplay but also make sure we show what’s happening in all the matches, not just the main one. So, we show goals in-play and there are shorter talking [segments] and introductions, especially for the group stage of the competition where there is lots happening at the same time.”

The audience stats back up the decision.

“We looked at numbers and metrics and we figured out, together with the platforms, that the audience is very interested in the gameplay,” added Adrian Roelli, head of eFootball at FIFA.

“Ultimately, what eFootball is doing, is serving the football family and ensuring that, in a playful way, you can get a young generation to get into football. It is really important for us as an organisation to deliver football on all sorts of levels.”

“That’s when they start to interact. We’re not saying that all the talking around it is not needed. We just make sure that the balance is right. People watch [the FIFA eWorld Cup] because they play the game themselves. They want to see how the professionals are doing it.”

Production of the FIFA eWorld Cup 2019 also went beyond the match action and presentation. Plenty of additional content was created for broadcasters to use too.

Roving ENG crews captured the colour and excitement around the arena and backstage, primarily for digital output but, utilising the same content production workflow, clips and packages were also made accessible to TV via an online distribution platform.

“We’ve made a lot of content available,” continued Darroch.

“So, if broadcasters want to promote around [the event], they have features, promos, short clips, long clips, summaries of the whole event, series summaries of last year. It’s a great library of content that we can produce making use of existing resources.” 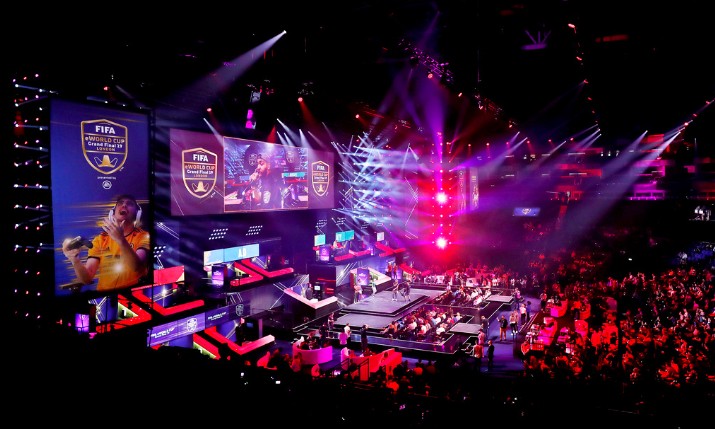 Roelli made the point that the event has different levels of content production, reflecting both the importance of TV and the fact that the video gaming community is digital-native.

“The main feed should be world-class,” he said.

“The experience that Sky has in producing world-class events is [very important] because we want to professionalise what we’re doing. And not just the players in the competition but also the production. 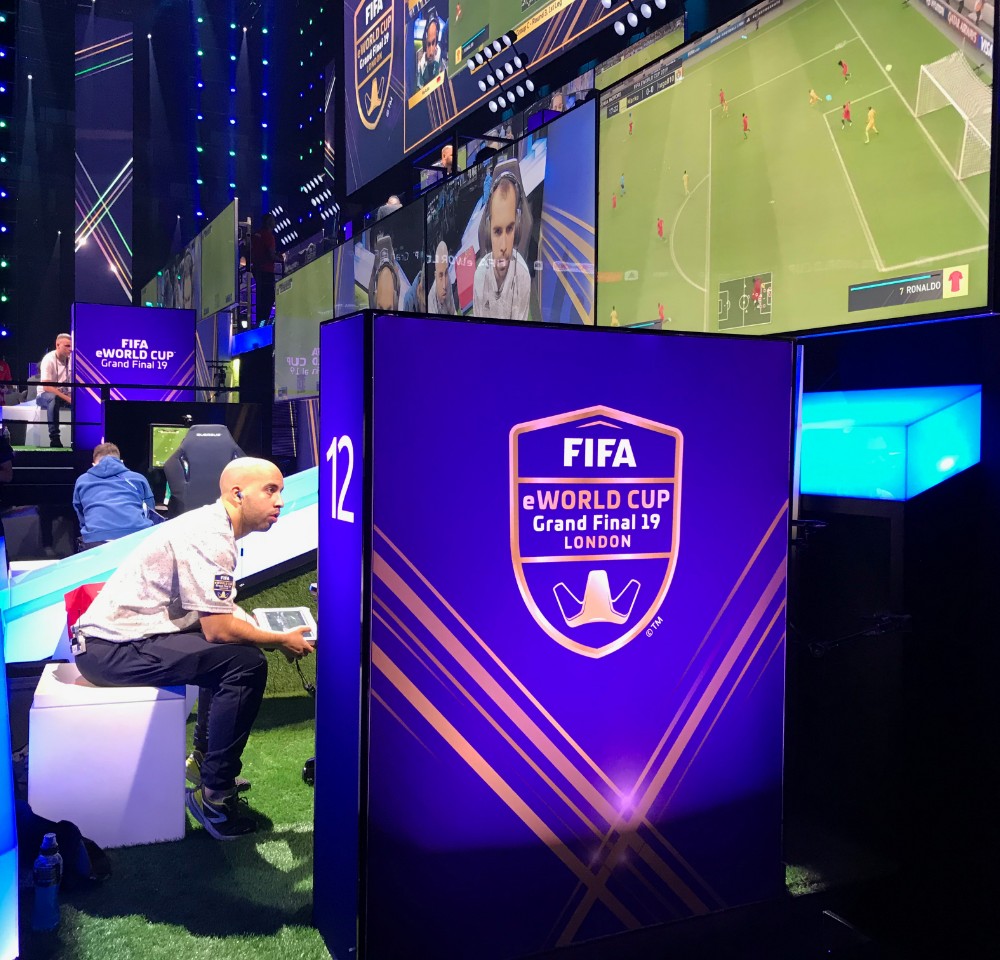 Serving both worlds will then potentially lead to a wider interest in the sport, and not just the simulation version, he added.

“Ultimately, what eFootball is doing, is serving the football family and ensuring that, in a playful way, you can get a young generation to get into football. It is really important for us as an organisation to deliver football on all sorts of levels.”