NEP’s presence at the World Cup extends across a wide number of clients and at the IBC it’s Fox Sports US, Fox Sports Brazil, and Telemundo who are relying on the remote production services provider as the backbone of their technical facilities. 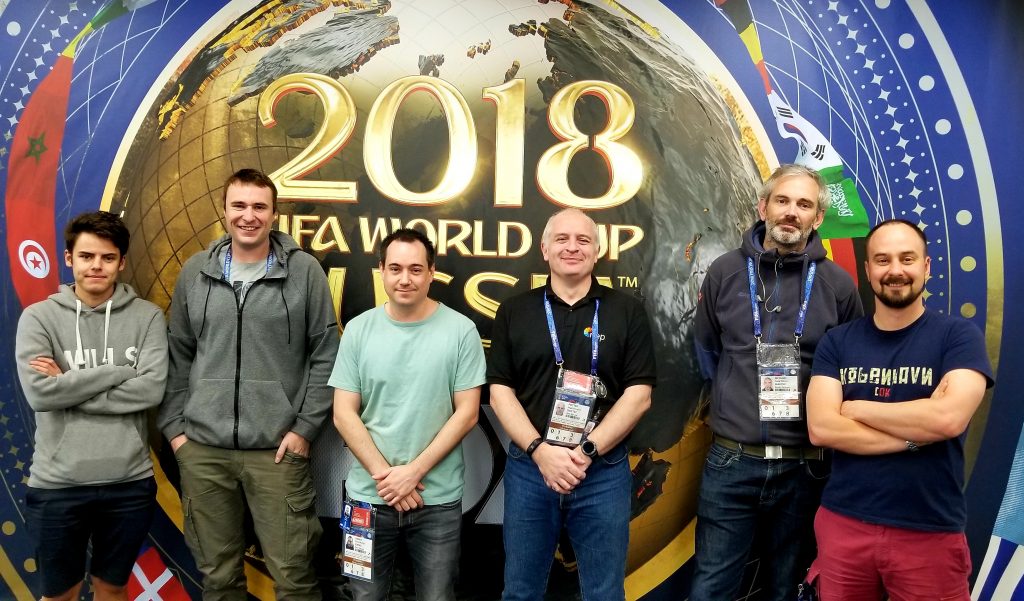 “Although it’s been a busy time for NEP UK as we also have Wimbledon going on, we have supplied the number of crew we need and have also been able to keep the same crew together between last year’s Confederations Cup, this year’s World Cup, and then next year’s Women’s World Cup as it is a three-program package,” says Hugh Potter, Technical Projects Manager for NEP UK who is focused on the needs of Fox Sports US.

“We want to keep the crews consistent as they can get to know the team at Fox as well and that makes the relationship much easier because everyone can know each other’s strengths and weaknesses.”

The NEP presence for Fox Sports is anchored within the IBC with an Imagine 450×650 Imagine IP3 router at the hub that supports a production control room, audio room, EVS replay area, and ingest area, and then a technical manager area for signal switching and managing the CenturyLink circuits that allow the Fox Sports team at the IBC to connect to the studio at Red Square and Fox Sports in Los Angeles.

At the core of the production control room is a Grass Valley K Frame Kayenne production switcher as well as second K Frame S series which is used to insert graphics and commentary into the UHD feed which is sent to the U.S. already fully produced and ready for distribution. EVS gear also plays a big part via 13 EVS XT3 replay servers, 17 EVS XTAccess units for transcoding, 14 EVS IPDirectors, EVS DB servers, and EVS Xfiles. Telestream Lightspeed encoders are also playing a crucial role for the facility which is operating in 1080p at 50 frames per second.

“We want to keep the crews consistent so as they can get to know the team at Fox. That makes the relationship much easier.”

NEP gear at the studio in Red Square includes the cameras and related support gear as well as the Lawo V Remote IV units that handle the signal transport of audio and video signals back to the IBC.

“That allows for either the control room here at the IBC to produce them or they can be sent to Los Angeles where the production team there can mix it.”

The big leap has been the move to 1080p/50 as a house format and Potter says it has been fairly straightforward. The biggest issue has been that the 3G transport of 1080p signals can be one of three formats, Level A and Level B dual link, and Level B dual stream, and not all equipment supports all three formats. At the IBC Fox Sports is operating in Level A which is the direct mapping of uncompressed 1080p at 50fps.

“It hasn’t caused any huge issues and as long as you bake it in from the beginning it isn’t a problem,” says Potter.

The World Cup project has been long in the works for both Fox and NEP has been a bit of a marriage between the NEP UK team and the Fox US team which also did some of its own integration work. For example, Fox Sports shipped over some pre-configured racks of equipment for outbound circuit support that it assembled in its Charlotte, NC, facility.

“We knew what they were doing in Charlotte and that made it a lot easier here as we could hook those up and that saved us a week or two in set-up,” adds Potter. “We could start working on testing much more quickly.”