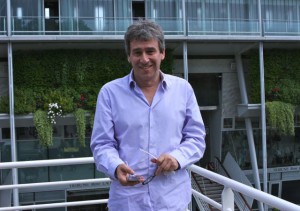 France Télévisions domestic and host coverage of the French Open winds down its first week, and, for Nicolas Kirszenzaft, production manager for the sports department, and the team of more than 600 production people, it has been a successful one.

France Télévisions coverage spans three of its networks — TF2, TF3, and TF4 — with a total of 13 hours of coverage a day. The network also has five of its own production units on hand (EuroMedia France is supplying a unit for two courts of coverage), one studio, a set in Court Philippe Chatrier, 21 directors, 14 commentators, and five analysts at the center of the production.

There are no major changes to the 2D production this year. The addition of a second cable camera from ACS France last year has the production at a level the team is comfortable with for the two-week event. The 3D production, however, is being handled by EuroMedia 3D for the first time.

While the Cablecam does not have the flexibility of the Spidercam used at the US Open, it also isn’t required, given that Court Philippe Chatrier is not nearly as cavernous as Arthur Ashe Stadium. It would also require additional towers to be built because a Spidercam requires four cabling points.

“We do have new graphics, but they are supplied by IBM and the Fédération Française de Tennis,” adds Kirszenzaft.