Live from the Irish Open: ETP and CTV bring their A-plus game to Royal County Down 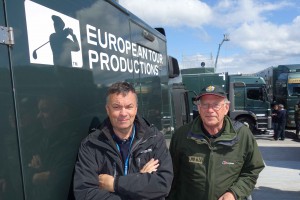 It became known as the ‘Rory Open’, a moniker the World number one golfer may have come to regret as he crashed out of the tournament at the half way stage having opened with a disastrous round of 80 on the wind-swept County Down links. However, the presence of the world’s top golfer at his home course meant the Dubai Duty Free 2015 Irish Open Hosted by The Rory Foundation last weekend was not a typical event for European Tour Productions and its technical production partner, CTV Outside Broadcasts.

ETP Technical Coordinator Stuart Cook told SVG Europe, “I was slightly concerned: because Rory is here and the event is supported by The Rory Foundation, there has been an awful lot of media interest. That means you end up with a lot of news crews in the Media Centre who don’t necessarily understand they’re not allowed inside the ropes and don’t understand the etiquette of golf. On occasions that causes us problems – but not so far at this event.

“It’s actually been a lot easier and less stressful than I was expecting, I have to say. It’s a very difficult course: small, hilly, very tight. A classic links course,” said Cook. “It’s hard to physically get around, and the Irish Open is always very well attended, which causes issues. It would be much easier for us, technically, if there were smaller crowds!

“Lots of courses we go to, especially in Asia, would have a tarmac car park around the whole course and buggy paths everywhere through the course. We don’t have that here … but it has actually worked like a dream this week, with RTE and the BBC. 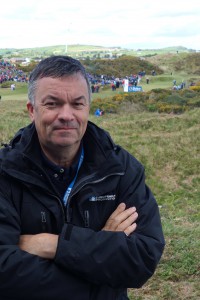 Stuart Cook: “There has been an awful lot of media interest”

“This is not typical of an ‘A’ event,” said Cook, “because normally it’s just us – except maybe at Wentworth where we’ve also got the BBC. Here we’re supporting RTE Television and Radio; IMG Radio who are doing the on-course radio station; BBC Northern Ireland who we’re supporting with a highlights edit which we play out to Belfast each evening; and the Golf Channel for whom we’ve provisioned a separate uplink and in-vision camera platform for them looking onto the 18th green. And of course we’ve got Sky as normal – for an A-plus event the only thing we do differently [for Sky] is we have a proper studio structure — looking out onto the Mourne Mountains — rather than just a tent on-site.”

On the road with CTV

“For our standard set up we have two pre-rigged trucks, a scaffold truck and a cable truck, as you can see here; these guys came from the event in Spain the week before Wentworth and those two teams leapfrog each other every other week; all the rest of the trucks do every event.

“These guys got in Tuesday morning and have been pre-rigging and scaffolding. On the latter we’ve built 20 platforms, and if there’s anything that’s bigger than four metres European Tour Productions will arrange for a local contractor to build them,” said Searley.

“This is a links course, and links courses are all sand dunes so you have the problem of stability of the towers. We have staking but we’re just about to go over to a water ballast system as well, for increased stability against the wind. The other thing about this course is that it’s old; it’s not one of the new ones that’s been built especially for tournaments with cart paths and so on. Here, with all the sand dunes up and down, there are no natural paths so getting golf buggies around is a tricky thing. For the cameramen moving around, typically with three positions to get to each day, it gets to be quite a challenge.

“Our core fleet is basically eight trucks, plus the cable and scaffold trucks. This one here is called a RAT transporter, and it’s called that because it transports two RATs! A RAT is a mobile scissor platform which goes up to three metres. We carry two of those, and the inside of the truck that carries them converts into workspaces during an event. What they enable us to do is cover fairway positions – instead of having to build a camera tower on a fairway, these can do three positions. So with two of them we effectively save six towers. Plus we could use them RF if we wanted to – but we tend to use them cabled.

“The extra towers here are built by a Dublin-based company, Event Services – they did all the camera towers at the Ryder Cup and they do grandstands as well; they’re used to working on golf courses.

“European Tour Productions produce the world feed,” said Searley, “which is basically the golf coverage. RTE have a truck in the corner there – they take the world feed plus they’ve got their own commentary and presenter camera in their studio. They take the feed and top and tail it to make it look like RTE have done it. Sky take exactly the same feed, and they top and tail it too. Every week, Sky are effectively an add-on – it’s just that they do it every week. That world feed then goes to the Golf Channel in the United States. They take the world feed commentary – but they have some influence on who those commentators are.

“SIS Live do the uplinking. Film & TV Services have the generator contract. And AA Access have the hydraulic hoist contract; but the trucks are all painted green so they look like they’re from the same company! We also have the same telephone numbers wherever we go in Europe; this cuts down the amount of local landlines we need to source,” said Searley.

“Another company, Creative Technology based in the UK, specialises in the big screens you see around the course and to hospitality and the club-house. They have a separate operation, taking the world feed and doing an IPTV closed circuit distribution called Tournament Television, to nearly 70 screens, adding advertising and so on. Tournament TV is a European Tour Productions initiative.”

The power of graphics

“The golf hole flyover computer simulations are done by Virtual Eye,” continued Searley, “from a New Zealand company called Animation Research. They do an aerial survey where a plane flies over taking aerial photographs and obliques, and all that material get sent to New Zealand and they do all the rendering. These guys end up with massive files which is basically the whole golf course, and from that they can do simulated helicopter flyovers, and can put in the pin positions on the individual days. 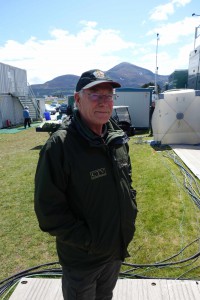 “They also have two guys with GPS backpacks who go out on the course with feature groups. So when Rory, Rickie and Martin tee off they’ll be waiting on the fairway and they mark the positions where the balls land; that information then gets transmitted back here by GPRS data and can then be added in as a graphic. We do that every week. So you get a helicopter eye view of the ball flying along from the tee with tracers and they’ll put a graphic in where the ball lands with the player’s name. The position the ball appears on the animation is determined by the GPS position.

“Now that’s different from a thing we use occasionally called Protracer, which is provided to us by MST Systems and was invented by a Swedish guy named Daniel Forsgrun. We used it at Wentworth last week; it actually traces the ball flight from behind the tee box. This system here can only tell you where the ball lands. MST has the contract to provide the graphics and the on-camera TV scoring for the European Tour.

“The European Tour has another graphics set up, which also comes out of one of these trucks,” he said. “They’ve got volunteer spotters with tablet computers out on the course and sending back scores. They have a wireless network, and the data comes back from the course into a server connected to a European Tour server in ‘cloud-land’. So when you look at a live score on the European Tour web site that’s where the information comes from.

“MST Systems produce three sets of graphics templates; world feed, Sky and Golf Channel, with different on-screen styles. These can all be generated on one machine, which is Chyron-based. One person can bring up all three leader boards in all three styles at the same time by just sending one message to all three – this obviously cuts down on operators.

“Sky have their own ENG camera and Final Cut Pro set-up in one of the trucks where we have a green room for the Sky commentators – that gives Sky their own production thread from the world feed where the Sky producer can get items that give them their own add-on stamp. Sky have two on-course commentators out on the course with radio mics – this week it’s Rich Beem and Wayne Riley.

“Viasat Denmark also do their own commentary. They again take the world feed and they’ve got an ISDN line with talkback and their programme audio goes on a subcarrier on the satellite. We usually get one other commentary each week like this; Viasat Denmark do a lot, and in fact we actually carry their equipment for them as they do so much. Viasat Sweden and Canal Plus are others who are very active,” said Searley.

Course audio into the Hydra

“The whole thing will go back to a hub on the course, a Calrec Hydra, and from there it comes back to the truck on fibre,” he said. “All the cabled mics get brought in every night, for security and also because if you leave a microphone out there, especially in Irish conditions, they end up getting a bit damp and crackly! We have dehumidifiers in one truck to dry them out overnight.

“Each camera has three positions on the course; each operator will physically move the camera along as we go through the day, like a rolling chain, covering the feature groups. We tend to commute the cameras so at any one time there’s a block of cameras covering the world feed, and there are some just behind that and some on the move, leapfrogging for the feature groups.

“So at any one time, although there are 16 cabled cameras on the course this week, there may actually only be nine that are operational at any one moment because the other are in transit to their next position. There are 54 cable positions in total out on the course,” said Searley.

The star power of Rory McIlroy was not enough to prevent him missing the cut at his home event – and other big names drawn by the McIlroy magic such as Ernie Els, Rickie Fowler and Martin Kaymer all suffered their own individual torments in the wind and rain of Royal County Down. In the end it was a job well done by Soren Kjeldsen who took the Dubai Duty Free Irish Open title after a play-off; and a job well done by the ‘backroom team’ of European Tour Productions and CTV Outside Broadcasts who roll on to the Nordea Masters at the PGA Sweden National in Malmo this week and then onto the Lyoness Open Powerered by Greenfinity at the Diamond Country Club in Atzenbrugg, Austria the week after that…