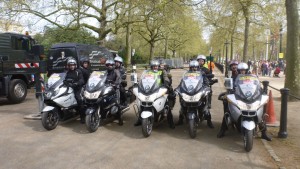 A fleet of motorcycles gets ready for the coverage

March 1981 saw the first London Marathon. At that time, around 20,000 people wanted to run, but just 7,747 were accepted, with 6,255 finishing the gruelling course. The event was deemed a massive hit with the runners, by the thousands of spectators lining the course, and the viewers who followed the race on the BBC. As a result, the 1982 race received more than 90,000 applications from hopeful runners around the world. The entry was limited to 18,059.

The race has grown in size, stature and popularity ever since. Now established among the major events in the sporting calendar, the London Marathon is shown on television in nearly 200 countries around the world. Over one million runners have completed the London Marathon, while a record 39,140 people finishing in 2016.

Directing the coverage for the BBC is series producer, Micky Payne who has worked on the event for about 15 years. “This is really six outside broadcasts, with individual trucks at the start in Greenwich, at the Cutty Sark, Canary Wharf, Tower Bridge, Blackfriars and the finish near Buckingham Palace. Each has its own director and producer, and in some cases in-vision reporters.”

In addition to those six scanners, there is a main transmission truck located near the finish where Payne and his production team work. Alongside there is another vehicle that accommodates the international director and producer. “That coverage involves a bespoke commentary, with the director having access to the domestic cut race feed, plus the helicopter and bike cameras, Of course, there is no actual directing of the OB cameras from the international team, but the operators know they could be used for a number of outputs and bear that in mind when moving their cameras.”

The 26-mile route has remained the same for some years, so there is no need for the individual directors or producers to ‘walk the course’. That said, the organisers work very closely with the production teams to inform them of any changes that are likely to influence coverage. “Although we are familiar with the event and the route, there is still planning to be done. This we do from the previous October time – and we always include a review of the previous race,” explains Payne.

He says the team is continually looking for a new and fresh approach to the coverage. “By and large, the technical challenges are sorted – so we have to address how to present the race to the audience. In reality, the main race is in two halves. The elite race with all the well-known athletes and then the massive surge of ‘ordinary’ runners with lots of human interest stories to tell.” 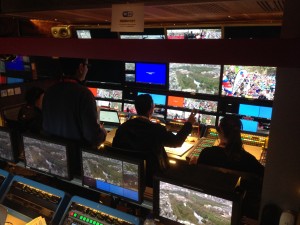 Overseeing the coverage from the main scanner near Buckingham Palace

Payne acknowledges that since the retirement of Paula Radcliffe, there has not been the same level of domestic interest in the elite race. “Most of the leading competitors are from outside the UK. Of course, there are still opportunities for UK runners to qualify for the Olympics or Commonwealth Games and we certainly concentrate on those runners, but generally speaking it is the other runners – the personalities or those with good causes to talk about – that hold the interest of the viewers.”

Aside from the race, there is also an appetite from viewers to see the changing face of the London landscape. “This a linear race, unlike many other world Marathons which involve an eight-kilometre lap track. So, viewers are treated to the buildings and features of London as the race progresses.”

CTV Outside Broadcasts has been covering the London Marathon for the BBC since 2014. Looking after CTV’s coverage is unit manager, Greg Livermore. “The rig starts on the Friday preceding the race. The event planning, however, begins a full year ahead, with a review of each year taking place days after the event. Detailed planning begins in February with site surveys and planning meetings scheduled up until the week of the race.”

Livermore reveals that this year’s coverage saw 48 cameras being employed, including a high motion radio camera, super slo cameras, and those mounted on helicopters and bikes – as well as regular fixed-position cameras. “On the bikes, we use Sony HDW790 cameras with Canon HJ15ex8.5BKRSE-V lenses.” This is a 15x zoom lens with a built-in optical image stabilisation system that intercepts light ray disturbances that occur due to vibration or jolt to the lens-camera system and corrects the deviations in real-time. 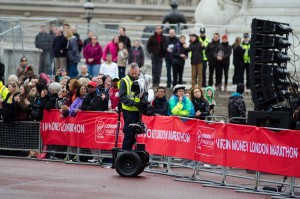 Getting close up and personal on two wheels

A number of innovations have been introduced over the years to boost the coverage. “Perhaps one of the greatest has been the enhanced radio camera coverage,” states Livermore. “In previous years, the race order had sometimes changed while the competitors were in the underpasses or under bridges in the Blackfriars area of the capital. Because of the problems getting a signal from those confined areas, no one watching was aware of those order changes until the runners emerged from the enclosed areas. We wanted to overcome that situation.”

Kent based Broadcast RF designed the switching and receiver setup so that there is no visible shift between the terrestrial and airborne receivers. Nick Fuller, the technical project manager at Broadcast RF explains, “Last year, as a test we demonstrated a ‘ground based’ receive facility for the links from the five camera bikes, along the last few miles of the course. This was a great success, providing uninterrupted overage for the vital few miles, where the last chance for any challenge to the lead runners will happen. It meant us negotiating permissions for a couple of building rooftop receive positions and then creating the ability to link these together with the final receive position at the finish line, OB vehicles. This meant we provided a seamless switch between the bike pictures linked via the aeroplane and those received on our ground based system.”

That plane is based in Calais and relayed the motorbike and helicopter images for the majority of the day. Eventually the helicopters were close enough to Canada Gate for their signals to be received by the 70m crane stationed in the TV compound.

Broadcast RF also provided all the mobile camera bikes, the two helicopter cameras and a number of hand-held RF cameras at the various OB locations along the route.

Livermore reports that other specialised camera systems were provided by Aerial Camera Systems. “CTV has worked in very close cooperation with ACS and Broadcast RF in order to bring together the highest level of expertise that has resulted in the innovative solutions for the marathon over the last three years.”

He goes on: “We introduced a small remote control Kart along Birdcage walk. The ACS Kartcam has a stabilised head fitted with a P1 camera and RF link, providing a brand-new perspective of the runners as they approached the finish.  A low angle shot, parallel with the runners gives an indication of their speed as they complete the race.”

This year, a Superloupe High Motion Radio Camera was placed at the Tower Bridge OB. This allowed a roaming radio camera to feed high motion images to the OB truck, for replays and close up footage. “It gave great shots, including detail of vast footfall, and strained faces as the masses crossed the bridge!”

Matt Coyde from ACS adds: “We also positioned a 100-metre Railcam with HD Cineflex V14 on the home straight and an ACS SMARThead at the finish line to provide enhanced coverage of this key area of the race”

Payne says that the whole operation works really well after such a long history. “Before BBC Sport moved to Salford, we used to coordinate the Marathon coverage from Television Centre in London. But now, it is all handled from the location in a truck and that doesn’t present a problem.”

He concludes: “The organisers are well integrated into the process – and while they do not influence the editorial content, they are very proactive and do like to see what is being done with their product. And that makes this event one on which everyone enjoys being involved. Utilising that approach means we are able to capture the scale of the human interest and emotion that is now an established part of the London Marathon. And that makes it very rewarding.”