Live from The Open: ACS builds on 2016 success with return of bunkercams

Aerial Camera Systems (ACS) is on hand at The Open Championship at Royal Birkdale and is building off a successful 2016 Open Championship with an aggressive camera plan that has 24 cameras in use this year highlighted by 10 bunkercams, five railcams, and a Colibri Wirecam. 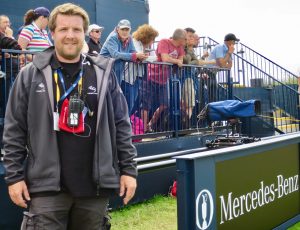 David Whitlock of ACS is overseeing a team of 13 at the Open Championship.

“At last year’s Open ACS was an absolute success story,” says Stuart Cook, European Tour Productions, senior technical producer. “What they did was brilliant and they can solve problems because they interact so well with the greens keepers.”

This year the bunkercams are found on six holes on the course as well as in three bunkers on the practice range (used by The Golf Channel) and an additional bunker that was constructed for Sky Sports near its Open Zone set.

“The bunker cams are at an interesting point as people expect to see them and there have been an awful lot of shots from the bunkers,” says David Whitlock, ACS, operations manager. “They are becoming part and parcel of the Open Championship.”

A new shot this year will be available via three Toshiba mini cameras that ACS has installed across the bridge the players use to walk from the practice green to the first tee. Because those three cameras will most likely be used in succession the use of a single camera model ensures that images match as much as possible.

“We also have two beauty cameras, one on the top of the stands on the first hole and one at the top of the stands on the 18th hole,” adds Whitlock. “Last year we used a Sony camera that was on a pole and there wasn’t much we could do about it [in case of rain or if the lens got dirty],” adds Whitlock. “This year we’ve taken it upon ourselves to put the Sony P1 cameras with wide angle lenses in a weatherized CCTV housing that also has wipers.”

Last year’s Open Championship at Royal Troon saw an ACS Colibri Wirecam system mark a broadcast first: the use of a cabled camera at an Open Championship for on-course coverage of the famed Postage Stamp hole. The topography this year unfortunately does not lend itself for setting up a cabled camera on the course but a CAMCAT Colibri is in use at the practice range. The smaller system can reach speeds of 54 km/h and houses a Sony HDC-P1.

“It’s contracted through the ETP but shared with everyone,” says Whitlock. “So, Sky uses it first early in the morning and then the Golf Channel uses it last thing at night.”

The Golf Channel is also using three other cameras, two with long lenses (one on a mound at the 14th hole for beauty shots and another near the practice range) and then a wide-angle lens in the Golf Channel studio.

The five railcams are located behind the tee boxes on holes 1, 4, 7, 12, and 14. One difference from last year is they are not used on holes where the ProTracer system is used.

ACS was also involved with pre-event shoots, including a helicopter shoot of hole-by-hole shots and a drone shoot for Sky that allowed Sky analysts to discuss different areas around the course.

Up next for ACS? The IAAF World Championships, to be held in London from 4-13 August.