Live from The Open: BBC Sport captures highlights from the biggest sporting event ever in Northern Ireland

Saturday morning at the 148th Open Championship in Northern Ireland and an Irishman sits proudly on top of the leader board. However, it’s not local crowd favourite Rory McIlroy, who despite shooting a dazzling joint-best round of 65 on Friday was undone by a calamitous opening eight-over-par 79 on Thursday to miss the cut by one shot.

Instead, the joint leader at the halfway stage is County Offaly man Shane Lowry, sharing with American JB Holmes. Lowry won the Irish Open as an amateur at Baltray in County Louth in 2009 and has spent his life playing links courses around the coast of Ireland.

There to catch the unfolding action over the weekend is BBC Sport whose television commentary team is still led, astonishingly, by 88-year-old Peter Alliss — one of only two surviving golfers to have competed the last time The Open was held at Royal Portrush in 1951. The commentary team also includes fellow veteran Ken Brown, who won the Irish Open at Portmarnock in Dublin 41 years ago.

The BBC is again producing a two-hour highlights programme on primetime each evening at 20:00. Meanwhile, BBC Radio 5 Live has live commentary of each round as the championship returns to Northern Ireland for the first time since 1951.

The BBC Sport website and mobile app are also delivering extensive coverage of the final major of the season through live text commentary and video highlights. Tickets for the event were sold in record time, with 43,750 spectators descending upon the Dunluce links on each of the four championship days. 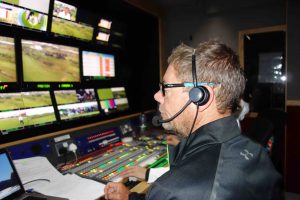 BBC Sport executive producer Jonny Bramley: “This is quite possibly the biggest thing ever to happen to Northern Ireland in the sporting sense”

On Friday afternoon at The Open BBC Sport executive producer Jonny Bramley told SVG Europe, “This is a huge thing for golf, and for the country here as well. Quite possibly the biggest thing ever to happen to Northern Ireland in the sporting sense. It has been anticipated for many years. For BBC Northern Ireland, they’re finding that nearly half the population is tuning into their coverage of The Open. It’s a big thing for the country.

“We have a similar set-up to last year,” said Bramley. “We have an on-set operation specifically set up for making highlights, because we’re on air for two hours at peak time on BBC Two. We’ll pick up big audiences.

“A lot more people in the UK will be watching our highlights than watching the live golf, so it’s very important that we provide a good package and tell the story of the day.

“Because we’re not live, we’re purely gearing our operation towards highlights. We have the studio here on site by the practice green with Eilidh Barbour presenting. We have last year’s Ryder Cup captain Thomas Bjorn as our studio guest. Because of the weather, it’s always nice to have somewhere to be undercover while the weather throws everything at us!

“We record the sequences with Eilidh and Thomas Bjorn as-live: we’re actually still packaging up the day on the first two days of play. For instance last night we couldn’t really finish our wrap-up of the day as there were players still out on the course getting close to 10pm, who were featuring high up on the leaderboard. It can be a tight turnaround to get the programme out on air.

“We’ve got four edits here, as we need to be starting packaging early on in the day. It’s not just the golf; we’ve got our openings, our ‘Ken on the Course’ pieces, our analysis and reflection of the day’s play.

“We also need to be flexible: this morning the weather was better and the play was much better, while this afternoon good play is a little bit thin. So we’ll have to re-evaluate our packaging and extend the early highlights a little,” said Bramley.

“In terms of technology progression, we’re now networked into the entire European Tour Production server here. It works well both ways; we’re providing interviews to the European Tour, where we clip interviews up and name them and they can be available for the World Feed. Likewise, we’ve got access to all the shots that have been recorded during the day and they’re very easily accessible.

“What we’ve found is we’ve added in shots to our highlights that haven’t even been shown in the main coverage. A good example was Ryan Fox’ back nine of 29 yesterday, which was an Open Championship record. He only really came to prominence towards the end of play, and his great approach play had not been seen on the live coverage. We were able to retrospectively go back and add those shots into our package.

“CTV are providing the trucks and all the facilities for us here. It’s an excellent team and we’re very familiar with them. They’ve been working on the golf for many years and are doing an excellent job, as they have always done.

“Something we remarked about this morning was how well the Open has been managed. The journey time was very quick – probably better than any Open.

“I think what they’ve done here in Portrush is they’ve looked at the infrastructure when planning this event for many years. It works extremely well for TV production.

“Getting around, ease of movement – it’s been really good here. The R&A has consulted with broadcasters and the local environment here and they’ve actually created a kind of made-for-measure system that has worked extremely well for broadcasting.

“The R&A has committed to coming here for another two occasions, and I’m sure that after this Open the reputation will only be enhanced and it will reaffirm their decision to bring it to Portrush. I think it will be a huge success. It’s shaping up to be a great event,” said Bramley.