Live from The Open: Broadcast RF in close support as Sky pres heads onto the golf course 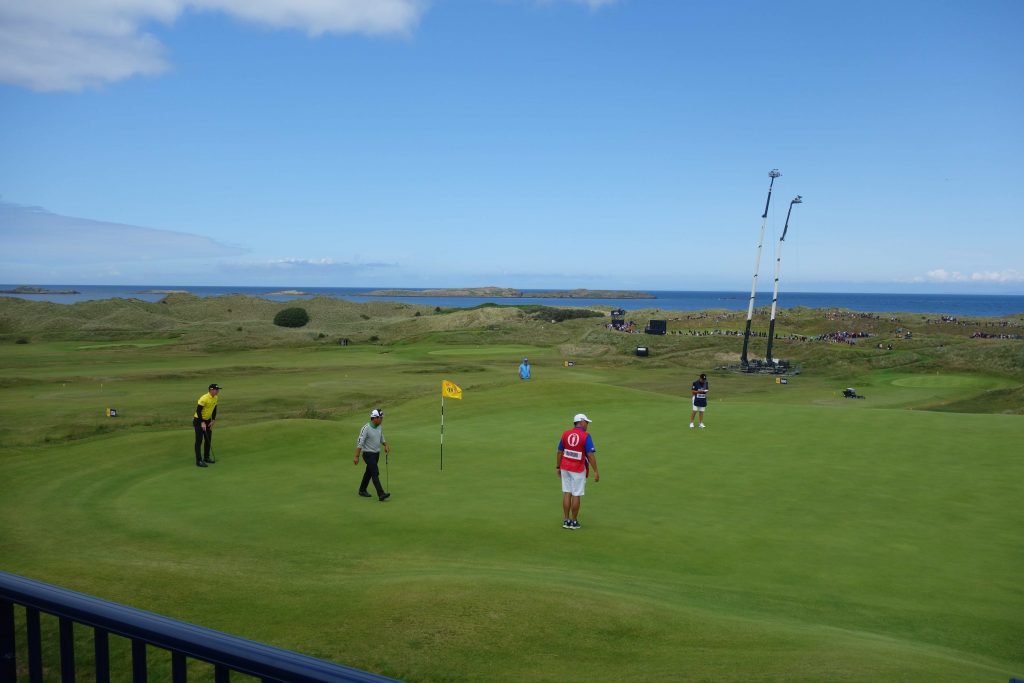 For the first time at an Open Championship, the Sky Sports Golf team is not using a glass studio by the 18th green as its main presentation platform. Instead, anchor Sarah Stirk and guests can be found out on the golf course during coverage, using a return vision monitor and control system supplied by Broadcast RF to retain contact with the production team as they conduct stand-ups around the Dunluce Links at Royal Portrush.

The commitment to drop the glass studio in favour of live presentation on the course was rewarded in spectacular style when Sky Sports came on air at 06:30 on Thursday morning for the first shot of The Open.

Head of directors & creative Duncan East told SVG Europe, “When we came on air the first day of The Open last year, we were in a studio behind glass. When we came on air on Thursday morning this year with Sarah Stirk, Rich Beem and Paul McGinley, at 6:30am, we were on the first tee with Darren Clarke teeing off behind the presentation position.

“When Darren had teed off, he walked over to have a chat with his old friend Paul McGinley at our pres position, whilst we were live.

“We made a decision to leave the studio because we wanted to get closer to the action. Nothing proved more that that was the right decision than after two minutes of being on-air, when Darren walked over for a chat, straight into our position.

“When people tune into golf they want to feel like they’re part of the course: who’s leading, what’s the weather like? This year we’re just out on the course, at the relevant tee or green, or back at The Zone: it’s flexible, relative to the narrative of the day,” said East.

“You would never have got that sequence on Thursday morning if you had been in the studio sitting behind glass. And that’s TV magic.”

“We have three transmitters out on the course that we can turn on or off, depending on where the monitor is, so that Sky can go anywhere with this monitor.

“They’re doing their stand-up studio positions in various locations around the course. They have ditched their main studio this year, and instead have two cameras, a monitor and a presenter completely roving. They’re not using the entire course – they could if they wanted to – but they’re just letting us know where they want to be and we can pre-select the right transmitter.

“This does add some complexity for us. The three transmitters are IP controlled and there are more fibre lines required to get the video to the transmitters. We’ve got IP to the transmitters to control them remotely, so we can sit here on a laptop. There is quite a lot of work involved in getting all that up and running in the first place. But it’s working well now, and seems to be delivering what they want.”

The receive infrastructure consists of 28 antennas around the course, with an equally large RF router setup capable of receiving 32 antenna inputs, and distributing 96 outputs.

Another key development is that Broadcast RF has moved its racks and receivers out of its own dedicated cabin in the TV compound and into CTV’s TOSCA central apparatus area.

“Traditionally we’ve kept all our racks and our receivers and control system in one room, but this year the cabins available to us were smaller and also the amount of kit we needed was greater,” said Halliday. “So we thought if we move our racks and receivers and put them in with TOSCA we can control them remotely over IP. 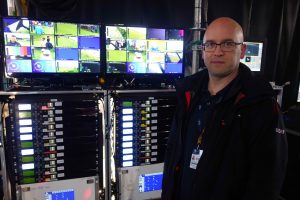 “That solves a number of issues, space being one and noise being another, with temperature control being another one as we needed lots of air-con in the cabin – and again that is noisy. Great for the kit but not so great for the people sitting operating that kit. Now our cabin is nice and quiet and there’s a pleasant temperature.

“Also we’ve got shorter cable runs between ourselves and TOSCA and TOC, because all the kit is very close by. That saves on a number of fronts including critical cable length.

“So the only thing we’ve got between TOSCA and our cabin this year is a handful of lengths of fibre optic cable which bring some video signals back to us and then we’ve got the IP control system that we are running. It seems to be working very well.”

How does the topography of the Royal Portrush course present challenges this year, compared to other courses on The Open rota?

“Well this year we’ve got a lot more antennas. We’re up to 27. We have four hoists up with two antennas per hoist plus a lot of ground-based. There’s quite a lot of overlap this year, so it seems to be easier for us to manage,” said Halliday.

“It is a hilly course; compared to last year at Carnoustie it’s quite lumpy. A proper sand-dunes links course. We’ve strategically positioned a number of antennas around the course at a lower level which are filling in the holes and then the hoists are doing the bulk of the main coverage. The fixed wing aircraft is also doing it’s thing.

“There are 29 RF cameras this year, which is quite a significant increase on last year. The BBC have dropped their camera and TV Asahi have come in with an additional one, so that balances out.

“The core coverage for ETP and NBC is the same. Both ETP and NBC have added a Toptracer – the cameras that trace the ball flight through the air. Sky have added a camera, and there’s another two extra in there as well for the Golf Channel’s marquee group coverage, making a total of four.

“In RF terms we’ve filled the complete spectrum that’s available to us. Ofcom did say that the military had freed up some 3 Gig spectrum for us if we wanted it; as it turned out we only use it for the monitor which is one of the normal 3 Gig frequencies that we use anyway so we didn’t need that additional spectrum,” he said.

“We also squeezed the marquee group cameras and one of the XMO cameras a little bit, so we’ve got five cameras where we would normally use four channels. They’re working very well; the difference in quality is negligible but it gives us a bit more bitrate.

“The fibre infrastructure CTV have put in here is massive, and they’re very accommodating with our needs. We use a different type of connector in the fibre system, something far more suited to RF than video. There’s a lot more potential for signal loss, so we use a very low-loss connector.

“They’ve built those connectors into all the nodes they have put around the course, just for us. All of the fibre infrastructure is put in to a very high standard, with very little loss on any of the nodes or joints. It has all been done superbly well,” said Halliday.