The Broadcast RF team has used all available spectrum for the wireless camera plan this year at Carnoustie, in liaison with CTV OBs and frequency regulator Ofcom.

There are 25 RF cameras out on the golf course this year, providing a mixture of match coverage and beauty shots including some specialist high-speed units. Carnoustie, on the east coast of Scotland, is not as physically challenging as Royal Birkdale last year (rolling sand dunes) or Royal Troon the year before (a classic out-and-back seaside strip course).

In fact, Carnoustie is quite unusual for a links course as it covers a very wide area, with a nine-hole course sitting in the middle of the championship course with a number of further practice holes adjacent to the main course.

Broadcast RF has a team of nine people on-site. The team arrived on the Friday prior to The Open, setting up cameras over the weekend ahead of The Golf Channel and Sky Sports The Open first going on air last Monday. This year the team has also been able to introduce some new technology, adding a second RF router to the matrix due to the increased number of antennas out on the golf course. 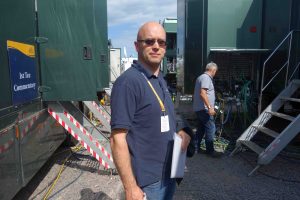 Broadcast RF Project Manager James Halliday at Carnoustie: “The spectrum on this is full. We would struggle to fit more cameras in”

“We’ve used the entire available spectrum here,” Broadcast RF Project Manager James Halliday told SVG Europe. “There are a number of frequencies that are national frequencies used by news broadcasters and agencies; they have one allocated to them all over the country for the entire year, and we’re using those.

“We have to go to Ofcom, obtain permission from them and then Ofcom go to the news agencies and advise them they cannot use those frequencies in this location for the duration,” he said.

“Ofcom are reasonably helpful. We know them all well. The spectrum on this is full. We would struggle to fit more cameras in.

“When we did the Royal Wedding back in May we had to get permission to use some military frequencies,” said Halliday. “That’s always a bit risky because we never know if they’ll adhere to the fact that we want to use their channels of not, so keeping their equipment off for the period.

“And then, of course, you occasionally have unlicensed people turning up, trying to use a channel. If we can find them we’ll go down and have a chat! But that’s not always possible on a golf course the size of this one,” he said.

“We do the RF coordination. In terms of video RF we’ve got 25 systems here, and then, of course, there’s all the comms over a huge number of frequencies. That tends to be dealt with by CTV’s comms guys [led by CTV Head of Audio Ian Smith]. We make one big spreadsheet together and send that over to OFCOM for approval.

“We have eleven systems in with European Tour Productions, five with NBC, three for TV Asahi, three for Sky, one for the BBC, plus the [fixed-wing] plane, plus a Wire Cam system. We have four high-speed systems: three are with Silverman [Inertia Unlimited] and one is Fletcher,” said Halliday.

“The bulk of it is match coverage. The high-speed units are doing a lot of beauty shots. Sky’s cameras tend to get nice wide shots, of the clubhouse and the 18th and the galleries. TV Asahi do quite a lot of interviews, as do the BBC and Sky Sports News, injecting interviews into their news channels.

“TV Asahi’s cameras are ENG cameras so sometimes they’ll just take the transmitter off and go off and do some stories in the morning and then come back to do course coverage and interviews in the afternoon,” he said. “We have GPS on the cameras, of course, so we always know exactly where they are at all times. GPS was introduced two years ago, at Troon.

“In theory, Carnoustie is an easier course than those we’ve done over the last couple of years [Royal Troon and Royal Birkdale]. It also goes round in a horseshoe shape almost, as opposed to a classic long out-and-back links,” said Halliday.

“So yes, in theory, it should be straightforward, when you look at it. In practice, the challenges are to do with having a lot of cameras all in the same position, especially around 16, 17 and 18. We’ve had ten down there just now, and they all start to overwhelm the local antennas.

“This is a big course and so a relatively safe place to trial a bit of new technology,” he continued. “We’ve added an extra RF router: we normally have 16 or 17 antennas around the site, but this year we’ve got more than that so have gone to a second router that we’re punching in as and when we need it.

“Each receiver can only take four antennas. But we’ve got 18 up currently; so we can just select an antenna based on where the camera is on the course and route that straight into that receiver individually, all done on the computer system,” he said.

“We’ve got a great big matrix panel if you like, and we’re just punching in cameras as and where we see fit. That’s a little bit extra, compared to what we were doing last year.

“It’s probably not necessary on this course but it would be on more difficult courses, so this was a handy place to try it out and see how effective it is. It has proved to be very useful, so we’ll probably use it on next year’s Open,” said Halliday.