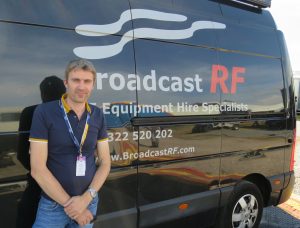 Broadcast RF is back at The Open this year, supplying a global turnkey RF coverage plan for multiple clients. It’s an RF approach designed to overcome whatever the great British summer throws at Royal Birkdale – which it did on Day Two when a sudden rain deluge in the afternoon flooded the greens and forced a temporary suspension of play to enable the standing water to be swept away before resumption.

While Royal Birkdale is not as exposed to the elements as Troon in Scotland last year, the height and concentration of sand dunes on the Southport course create a new set of challenges for the RF team.

Broadcast RF Managing Director Mark Houghton said, “there’s one more RF than last year. We’re doing the Wire Cam this year, which we didn’t do last year. Sky Sports News also added in an RF handheld this year with full-course coverage. There are 25 systems in total. We’re doing 19, plus the Wire Cam, and then there’s five done by CTV.

“We have six ETP handhelds, a Steadicam, four NBC cameras, three for TV Asahi, two for Sky Sports (through the Telegenic truck for presentation, not on-course coverage), one for Sky Sports News, two cameras going to the marquee truck – and then two high speeds for ETP (Inertia xMo1 and xMo2), two for NBC (Inertia) and a high speed for Sky Sports (an X10 from Fletcher). Plus a fixed-wing aircraft beauty shot camera, which is a joint undertaking with CTV.

“This course has a lot more dunes than Troon,” said Houghton, “so we’ve got the same amount of antennas but we’ve got a lot more sites – we spread them out more, to cover some of the tricky spots. As you know on The Open we have to be completely handheld, no poles allowed [by the R&A]. So that means more sites than last year.

“This year we’re also doing all the tally distribution on TSL over IP, which makes life a lot easier. That ties in with the Axon Cerebrum system from CTV; we just hook up to that. Our UMDs are getting tallies and are being dynamically updated centrally – as well as everyone else’s – all tied to that system.

“We’re GPS-tracking everything, as normal,” said Houghton. “This time we’ve enhanced the GPS tracking and made it more visible, so that it’s now distributed to everybody. It goes into the TOC and is visible on the monitors so you can see where all the cameras are. We have to get all our signals into the TOC, and this year it’s a lot easier as it’s a much bigger area. From our point of view it has been easy to get feeds in and out.” 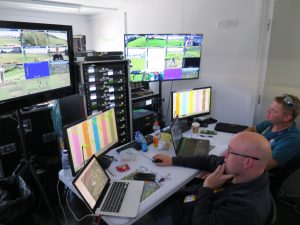 Monitoring cameras inside the RF control cabin in the TV compound

in March. The team arrived on-site at Royal Birkdale on Friday July 23 to prepare everything ahead of broadcaster rehearsals. “We’ve got seven guys from Broadcast RF and another two guys principally looking after the high-speed CTV cameras — plus another three running cameras and putting all the sites up. It’s quite a big crew. We don’t have long to get it ready really. We travelled on Friday, and by Sunday afternoon we had to be up and running, in certain areas, for Sky and for the Golf Channel,” said Houghton.

“Another thing we’re doing here is data switching. We have two transmit sites for UHF camera control data, and our camera control receivers intelligently switch between the two sites. So we have more course coverage of the data – which means that if we need to bring a hoist down, or there’s an issue on one site, the cameras aren’t affected and there’s no down time. Normally we do it from one site, but this is the first time we’ve had two sites; it’s a Videosys intelligent switching system.”

For frequency planning Broadcast RF works with and through regulator OFCOM. “We started working with them in November, and we use everything in the 2.5 Gig band, plus some 3.5 Gig,” said Houghton. “A lot of broadcasters — like Sky, BBC, ITV and ITN — have a long-term channel; we take most of those frequencies back. And the R&A gets OFCOM on site as well, to help coordinate everything. We go to OFCOM direct for the video side, as does [CTV Head of Audio] Ian Smith for the comms side.

“The OFCOM guys are busy,” he said. “Around this time of the year there are lots of big events in the UK. You literally go from Wimbledon to Silverstone to this. But they’re good; it’s always pretty clean and well managed in terms of spectrum in the UK. Going through one agency is good.”